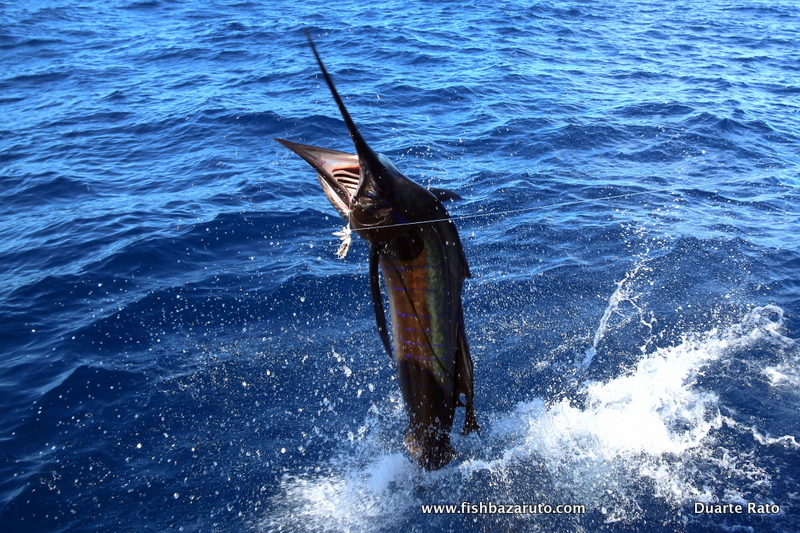 Here´s a small round up report from Mozambique, Bazaruto, Vilankulos and elsewhere on the fishing during May to mid-June. The annual Vilankulos Sailfish competition, fishing conditions and a Giant Trevally caught from shore, Marlin fishing around the World and 2019´s first Grander, Madagascar coming up and available dates for the upcoming Bazaruto Black Marlin Season….

During the first week of July (3rd to the 7th) we had the annual Vilankulos Sailfish Competition. Organized by Big Blue and hosted by Vila Do Paraiso, it is now on its 7th year. It is one of the most enjoyable, relaxing and fun get together event of its kind and the vast majority of participants have been coming from the first years.

Always good to meet up with everyone, the folks in town real get into it as well and the deliciously prepared dinners after the daily prize giving, are always a blast. The guys at VDP really put up a great spread with a pig on the spit after the Captains meeting, followed by some great nights of barbecue´s, seafood and curry nights throughout the week which culminates in a couple of sheep on the spit on the last day after the final prize giving.

Unlikely for this time of year (last two events where fished in flat calm seas) this time around the weather conditions where not as forgiving and overall conditions where hard. Fishing had slowed down in the week leading to the event and persisted throughout. Foul weather, a big drop in water temperature and a low-pressure system just before probably did not help. Despite having the worst results since its inception, a great time was had by all, some sailies where released along with some good game fish, especially on the last day.

Fishing aboard Veleiro with Morgan and anglers Mike Goch and his son Rylan we were the defending champions and where lucky to, once again win first overall prize. As with last year we also won best angler with the most sailfish released (Mike Goch) and biggest wahoo of the event at just under 16 kg´s for Rylan Goch.

Above: Mike Goch, fighting another sailfish from Veleiro won the best angler for the tournament and his son Rylan (right) with the biggest wahoo of the Vilankulos Sailfish competition.

South of us, the Guinjata Species Bonanza, the biggest skiboat competition held in Mozambique took place around the same time. Not surprisingly they also struggled and fished in less than ideal conditions. At the end, Team Uli Buli won first prize overall and Angler Sean Cater won the biggest game fish overall with a 26,5 kg Amberjack.

May – June fishing in Vilankulos

From Vilankulos and the Bazaruto Archipelago there where some good fish reported over May and before this slower lull in the fishing. A few Black and Blue Marlin where caught early in the month when water temperatures where still exceptionally high. There were also some dorado around and as it cooled down the Vilankulos Sailfish started to move in and there where a good number released. Good numbers and size cuda also being caught, especially up the northern areas where the jigging guys where also finding fast yellwspotted and bludger action. We had a 5-day fly fishing charter over mid-month and Alex put the boys into some great fish and a vast variety of species. That included a lot of small to mid-size kingfish (trevally´s) including a few GT´s. There was some pretty decent jigging and popping over that time and some nice Geet´s reported.

However, the best GT was amazingly caught from the beach. Fishing with Morgan from Big Blue, Francois come on a two-day fishing trip to Vilankulos with one mission in mind and that was to catch a big GT from shore. On the second day, he connected to a real nice one which was released after a 40-minute fight and at 130cm was estimated at 42kg´s.

We were happy to hear that we, on Vamizi and fishing Bazaruto from mid-September to early December, won the 2018 Top Black Marlin tagging boat (alongside Tarka from Kenya) and, biggest tagged Black Marlin for the second straight year for the African Billfish Foundation tagging program.

We also received the results from the Marlin research & conservation project that involved the collection and study of genetic tissue samples taken from billfishes distributed across the Atlantic, Pacific, and Indian oceans. This was extremely interesting information, to read more on it please click the link below;

Elsewhere in the World, the first grander of the year was still to be found by the end of May. They do not come easy but with some hot fishing around some area´s and a good number of large fish being caught it was odd to say the least.

The Cape Verde´s was and is still having a phenomenal bite and in May alone they counted for over 40 Blues over #500 pounds and up to #900. Into the first 2 weeks in June and they still finding big fish albeit less numbers and in that time at least 18 over #500 where reported with a couple being called 950.

The Canary´s also started to see a good run of fish in May and reported 10 over #500 and already 9 in the first two weeks of June. Exactly the same number that Madeira as reported over the last two weeks. We all know the small fleet and big fish potential of this beautiful Island and it sure looks like they in for a big season.

Some cool pictures sent to us from Cape Verde by Christian Kruger fishing aboard the Hebe.

Cook Islands get´s the 1st Grander of the year

Well, right in the beginning of June the first Grander for the year come from a very unexpected area, the Cook Islands.

And although we do fish in very small boats off Bazaruto and catch some very big fish, one has to respect those boys on this amazing catch done from an extremely small boat.

Well, we have a couple of charters from Bazaruto and Vilankulos up to the end of the month and then it’s off to Madagascar for a few weeks. Last year we released 63 sailfish in 5 days fishing the Costa Banks and then went south to target GT´s. This year we are hoping to spend some more time on the banks and explore further into it.

Too see last year´s Madagascar report click on the links below;

We have one available slot left aboard Vamizi from the 27th November to the 4th of December, but still a couple slots available right during the peak aboard the 31ft IBO or the 38ft Game Changer during October (8 to 17) and November (6-17).

For bookings or more information get in contact at:        dudas7mares@gmail.com