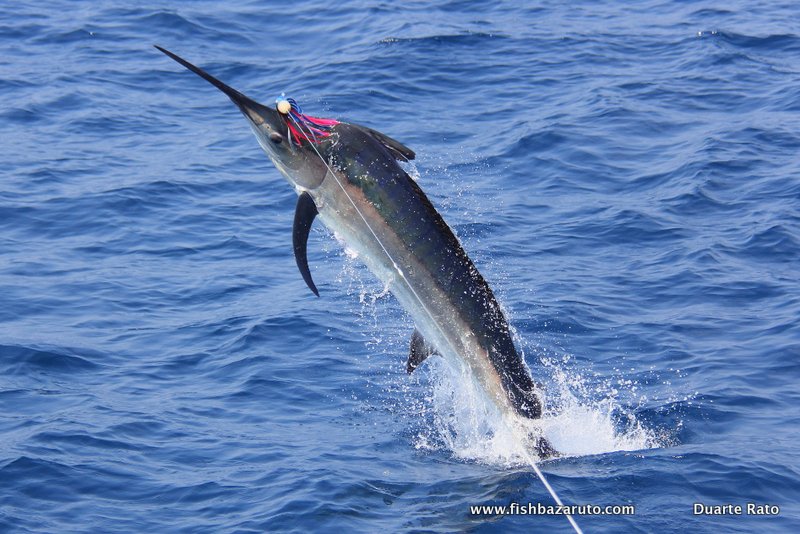 So, while I was away slaughtering the sailfish in Madagascar, things become rather interesting back home in Vilankulos – Bazaruto, with the boys finding an unusual, but certainly welcome, really good Winter Marlin bite, with some good one´s seen amongst a few smaller to medium size models caught.

Most of the charters during this time, and as is normal in winter, are either conventional light tackle for sailfish, wahoo and other game fish or popping, jigging or fly-fishing.

Or a combination of all of the above…

Those have been good, and the wahoo, which where late to come in numbers this winter, have finally arrived thick and strong.

What we do not usually have is many heavy tackle charters outside our main marlin Season of Sep-Dec and sometimes around March to early May.

But, when you get some solid numbers of Black Marlin around the middle of winter you better cash up on it.

Black and Blue Marlin are caught of Bazaruto year-round and into the winter.

I maintain that, in these waters and if you specifically target them, you are bound to find them round the yearly clock.

September to mid-December is certainly our peak time for numbers, but especially really big fish. It varies every year, and we have had exceptional fishing in February, but, from then to mid-March, fish are around but, invariably the water is so warm they become exceedingly lethargic. From then, on to early May is our second-best run which is more about numbers than size. June and July almost only see small specimens normally caught as a by catch on light tackle sailfish baits. August tends to be the best month to catch juveniles and, normally, when these small fish are plentiful then, it is the sign of a good Heavy tackle season to come.

We have, in the past, caught 800 plus fish in March and even an estimated Grander in May. Our best ever Blue Marlin day was I the first week of July a few years ago.

But to find small, medium and big Blacks in numbers early July is certainly uncommon.

But, no one is complaining about some Winter Marlin for sure!!!

Well, in between the light tackle game fish charters we had Tim Bacon, who as fished with us a few times in the past, in and out of the peak marlin Season, for a few times. He came with his family for a week and put in three fishing days with his two sons. He was hoping to catch a few good game fish and sailfish (which where strangely absent).

When, on the first day he realized there where some off-Season Winter Marlin around, he made sure to capitalize on it. They were unlucky, or maybe also caught off guard, but while fishing with Alex and Fernando aboard VAMIZI and IBO, they had a great time and both Tim´s sons caught their first ever Marlin.

Here´s an email I just received from Tim, with a…

We had a great time at Anantara – My wife spent time in the spa, we all did horse-riding, dune boarding, wakeboarding, cooking course (that was really good!) and had a really great holiday.

Also, the villa was perfect for the family.

And we got the boys their first marlin each!

Cole (15) had a 150lb fish inhale the long rigger, jump once and then came to the boat nice and easy. Good show on the leader so we got some cool video and he was super stoked. He also got a nice wahoo. When we were clearing lines to run in, Cole was cranking the shotgun and got hit – he was so surprised he stopped winding and, without the momentum, a nice little Black faded off.

Kieran then had a 350 on, nice jump but, Captain and Angler, were a bit slow and as soon as it turned it came off. Maybe bill wrapped!

Then he had a very nice fish, maybe 700, come up on the Island Express, nice explosive take and awesome first jump. I think he was again a bit slow picking up the slack and that one came off as well. Now we were a bit bleak. Late afternoon one of the rapalas on the light bait rods went – not wahoo, maybe a tuna? He bought it in to within 10m of the transom and a nice 400lb exploded out of the water and broke the thin piano wire. 3-0, he was trying to smile but was hurting!

Last day we went on IBO – early morning he got a nice wahoo to start but didn’t even take a pic as it wasn’t a bill. We reset it and 10 minutes later a 200lb fish inhaled it. Long run, lots of jumps, tired angler and finally on the leader. Big relief for all of us!

Thanks for your help in getting us sorted, it was a great time and we will be back.

…and hope to catch up and fish together again soon!

During the same time our second boat also capitalized on it, going 2 for 4 and raising another one in two fishing days. Morgan on Veleiro also catching one of about 200 pounds. Unfortunately, no one is out there at the moment targeting them, to see if these Winter Marlin are still around.

But, the light tackle game fishing is really good at the moment and better late than never. The wahoo gang finally arrived for their winter run and there are lots of good size fish around with double, triple and quadruple headers being the norm for those chasing them.

Duncan MacGregor, who will be fishing for Marlin with us in early November once again, recently enjoyed some great wahoo fishing down south. Fishing from his own boat and house in the Sanctuary (San Sebastian) he had an absolute ball with those speedster’s fishing mostly, at the rightly named, wahoo.com & Marlin pinnacles.

It’s nice to see such good conditions, calm weather, warmer than usual water and especially some winter Marlin around, hopefully a good omen for the Season to come which is just around the corner.

For those interested we had a two recent cancelation´s and thus have two openings during the peak of the Marlin season;

Anytime between these dates, which is a great time for Marlin and also for those wanting to mix it up with light tackle game fishing, spinning and popper fishing – seeing this is when we usually see our biggest GT´s

Too see package price & details please click on the link below: