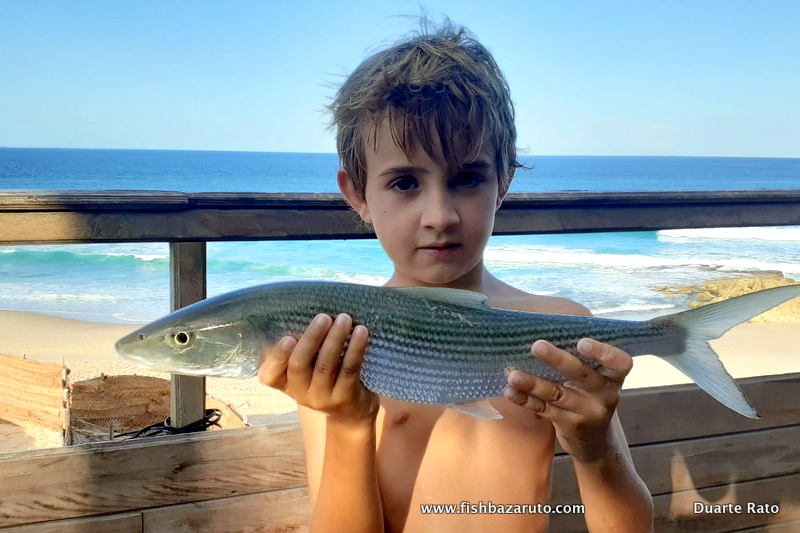 The Bonefish of Pomene – Mozambique

After the few awesome days at BD (Bartolomeo Dias), where Duarte Jnr. released his first Marlin, we came home. For one short night! Pick up Mum, groceries, drinks and more fishing tackle and, the next day we were driving 3 ½ hours south to another very secluded and special place, where we caught a few fish – the most exciting being a few Mozambique Bonefish.

To see the story, pics and video of Duarte´s Jnr. first Marlin, click on the link below;

Now, for those who don’t know the southern Mozambique coast well, Pomene is certainly right up there amongst its most charismatic places.

The astonishing sunset´s from the estuary.

Such a special and sentimental place for me…

The first time I went there, in the early 90´s this “Madala“showed up as we walked into the ruins of the old Hotel. Wearing a worn out, but impeccably ironed fading white hotel uniform which survived from the 70´s.

He told us he was looking after the hotel, or what was left of it and…

waiting for the boss to get back!

This after almost 20 years of colonial war.

The young local kids, as we slowly drove through the villages, would run away.

We later found out most had not seen a ´´muzungo“before.

I will never forget the numbers and size of the GT´s we saw on the blowholes standing on the cliffs, on my second trip there shortly after.

On the sea and estuary, which has now been massively netted, we shot big GT´s, Barracudas, River Snappers, Cob and saw massive Brindle Bass, most of which in 2 to 5 meters of water.

Here´s a couple photos from then….a real blast from the past!

also shortly after, sometime in 1994, we got there just before sunset.

We had towed my first ever boat “Kamikaze“.

A small rubber duck I had bought in the Black Market (from the flood NGO reliefs). It had a two stroke, 15hp engine, which I had bought, probably, 4th hand from the Chinese at Catembe.

We put the boat in the water to try and catch a cuda for dinner on the back line.

This was the first time I actually fished out on a boat at Pomene.

Ten minutes later we had hooked a Sailfish.

The old timer´s (my Dad and the late Capucho Paulo, who was the angler) wanted to boat the fish, but I was adamant we release it.

After all, we were on my boat!

Sorry, I just got carried away on a nostalgic trip…

…back to our Pomene trip and its exquisite Mozambique Bonefish.

I have been back there a few times in the last few years and its always one of my favorite places.

We hardly saw anyone for the week, surfed, spearfished, jumped and played on the rocks, blowholes and natural pools with the kids. Drank a lot of ice cold 2M and had some delicious dinner´s including one of my favorites…a proper Crab Curry!

Generally, just had a grand time with great people.

And, of course we fished!

We could not get a boat, which was a pity as every day we saw action throughout the day from the house, not a mile or so from land.

We had to resign fishing from shore, and although we did not put as much time into it as we should (not great conditions first few days and a lot else to do) we did have a great time catching a few different species, including stump nose, guitarfish, wave Garrick, small kingies and a few others.

But, for me the highlight was certainly the Bonefish.

On to another nostalgic trip…

I remember being mesmerized by them when I first saw them under water back in the early 90´s!

Back when I was a teenager, and all I wanted to do was chase girl´s and spearfishing.

The first time I saw them, was on a neap tide, on the sand, just on the inside of the reef at Hell´s gate.

A big school of about 50 Bonefish.

All nose digging in the sand against the light current.

All similar in size, big for the species, around 6 kg´s.

We once, saw a local catch a 9-10kg fish, on the same area, which would have probably been a World record.

Mozambique was and still is, certainly known to have very big bonefish.

Those days I was very trigger happy and proceeded to shot one.

First and last time I ever did so.

Then, a good few years later I arrived on the Bazaruto Archipelago…and never left!

Those early days, living and working on Bazaruto Island, 15 to 20 years ago.

We (the resort staff) used to go and fish late afternoon and into the night at Sailfish bay and surrounding areas. We used to make a big bonfire, braii and catch heaps of fish.

And, lots of big Bonefish.

So much so, that a Bonefish expert from the States, flew all the way to Mozambique to see if there was a viable fishery for them on the flats between the Island and mainland. He did the same in the Quirimbas, where we had the other resorts. And, although we very seldom saw them in the flats, he left dumbfounded with the size bonefish he saw here.

This trip to Pomene we went spearfishing from the shore and saw the exact same thing we did almost 30 years ago. A school of around 50, digging in the sand, against the current, all the same size…. except they were much smaller in the 1.5 to 2 kg range.

They were smaller but just as majestic.

And then, we caught a good few of them of the beach.

Duarte Jnr, got the first and was ecstatic with another species he had never seen.

The color, silver with slight darker backs with some olive green tinged into it on some species.

The pick-up, the speed and fight on the right tackle (eventually I was using my lightest spinning outfit)

The previous day I was reading a fishing book where Zane Grey mention they are delicious.

One would certainly think so with their gourmet feeding habits.

I was not so sure but having never tasted one we took one for the pot that night.

Tasty, but dry and bony

But never mind, those beauties are certainly for the release and one can certainly see why this is such a magical fish for so many anglers all over the World…

The Bonefish of Pomene – Mozambique