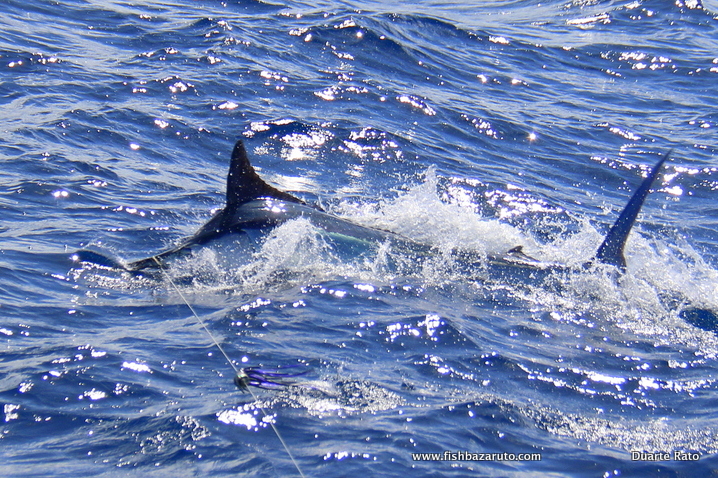 Carl Jankowitz is no stranger to those who follow us and the fishing at Bazaruto, he as caught a lot of good fish and more Granders in Africa than anyone else on the post war era. All aboard Vamizi off the Bazaruto Archipelago. Last year he was aboar when we released another good fish estimated at over a 1000 pounds, this time by his friend Andrew. However last yer he also did a trip in late September and during that time he released 4 out of 5 Blacks in four fishing days.

You can see that report here…

This year he was joined by his friend Howard for the first two days and then Vaughn Richardson for the last days.

The first day was the 28th September and after finding green water outside Benguerra the previous day and again green water when we got to lighthouse in the morning we decided to go deep. We would later find out this was the wrong move but that´s fishing!

We made our way out to the Blue spot and at 9h15, shortly after arriving there we raised a small fish, not sure if a Blue or a Striped, that just knocked our long right Marlin Magnet. But, that was it and after speaking to Morg´s on the Sat phone that they found some blue water down south we made our way there after midday.

I was amazed to find such gorgeous water as we got to Giant´s area. It was blue and full of bait and the couple hours where nonstop action…I was just cursing myself not to have gonne and have a look there in the morning. It just looked so good. Howard first picked up a nice wahoo, followed by a dorado and some skipjack and a YFT. Then we had a double hookup on sailfish. Where unlucky to have the hook come undone on one but Howard released his first ever billfish.

There seems to be a whole lot of sailfish for this time of year and in the few days we have done so far, and not targeting them we have released four out of seven bites and ten fish that we raised. This I believe is because the amount of flying fish around at the moment is just staggering.

Then we got a triple YFT strike and caught them all. We rigged that one and within 15 mins had a nice fish rip the bait. Such a savage Marlin strike that it ripped the bridle out through the eye sockets. Very frustrating and very unusual to happen…

The same area had been cooking that morning. Kisawa reported incredible non-action on game fish. Veleiro, who was fishing with our clients Ralph Hamann and his 14-year-old son Noah also had some great action. I had spoken to Christiaan and we agreed to meet out wide. However as soon as they put the lines out they picked a Yellowfin they decided to bait. Within 10 minutes they hooked up to a feisty Black. Noah was in the chair and the plan all along had been to get his first ever Marlin. That was all it was about. He did so in grand style and released the 250-pound fish that gave them some awesome jumps.

Of course, they decided to stay in the zone and went in to look for another bait. It did not take long to get another skipjack but this one was badly hooked.

Then they got another one and while pulling it on the TLD 25 bait rod a #200 Marlin come and took it, hooking up in the process. Ralph got on to this one and after a nice fight managed to release it.

You can see a small cool movie of the first fish jumping boat side here;

Obviously, we went straight to the honey hole we found the previous afternoon on our second day. However, it was disappointing that there was very little happening. This despite the water being good and lots of small bait showing on the sounder. We tried for bait in the morning and saw a free jumping sailfish. We turned and sure enough it come and zipped both out rappies and then knocked the express, the only lure we had in the water, a few times but not hooking up.

We set the lures. Worked south of Giants for an hour. Finally birds out deep. Got in close, skipjack. As he does Carl is already on the bow. Stop the boat up wind. Cast that GT ice cream and ON the first cast. We bridle the bait and hopes are high. Just for an hour before being taxed.

We set the lures and a straight course to 9 mile reef to go popping. On the way, we pick three YFT. Change of plans. Put two on the tube, go deeper and bait them. Tacking south we get both baits sharked within an hour. But now there are Yellowfin everywhere. Literally. Carl is having a blast casting and hooking them up one after another. We try and put a few livies but with all the tun around so are the sharks. We get a bunch of heads and a few circles gonne. Carl still catching tuna after tuna on the bow. In retrospective, the bite was on and we should have been working the lures around there…at that time. But too much much to be had on the light sticks. Eventually one of the sharks unfortunately get´s hooked on one of the livies. A big Shark. Carl tells Lourenco to get in the chair. His first time ever and sun setting the drag. Shirt work of a massive Zambezi which we released and looked well over 500 pounds. A Shark but Lourenco tough it was a good fish anyway and his smile could it all.

We set the lures. Some green water coming out in the area with the outgoing. We work between 5 and 6 mile and just after 1pm finally a fish comes up. Not a bit fish but probably between 2-300 misses the SR magnet comes back for seconds’ peels 20 yards but never finds steel. We work the area but finally have to come in just before the wind picks up. The bite slowed down most probably right because there was a low pressure on the way. It come in with a vengeance and a while later after we got back it was blowing out at close to 30 knots. The next day was a blowout.

The next day was a certain blowout, but it was cool having the family visiting and had a great chilled day with them and catching up on emails and tackle.

The 1st of October we decided to go out just before noon and it was nice to see the sea was not on its head and that the SE had pushed in some good blue water. It was pretty sterile out there tough with no birds or surface activity.

We went to 9 mile for a popping session but no bait around and besides missing a cuda and raising a black fin not much happen.

We put the lures out for 3 ½ hours and on out first tack from 9-mile to Sailfish Bay hooked up on the green Marlin Magnet from pulsator in 108 meters of water. Vaughn, who arrived yesterday to join Carl jumped in the chair. He made small work of the little guy. But we had some crazy jumps with the fish heading straight towards the boat. Really cool stuff before we put the tag and let him go.

We tacked south picked a skipjack and a bonnie and had another shirt popping session before heading home.

Cool to go out late, get a good fish and come in early for a scotch 😉

The 2nd was a beautiful weather day with a light N wind. We started with a plugging session up north which was a mistake as the turn is not the best time to plug and it’s the best time to Marlin fish. We set the lures at 8 and not ten minutes after had a crash bite on the long left that did not find steel. Could not really see the size of the fish. Down south and just before that Charles missed one about 800 on a bait. From there on it was pretty slow even though we had some amazing baits for a large part of the day. Got amazing light tackle spinning action on the YFT, got some skipjack but that was about it.

The next day it was blowing hard from the N in the morning. We caught some skipjack but where unlucky to have them all badly hooked and die quickly. Just after 8 IBO right next to us where bringing a YFT on the bait rods and had a big Marlin try and eat it. At about 11 the wind settled and I decided to tack south and have a look around Sharkville. On the second turn there BUMMMMMMM hookup on a real speedy one. This fish did nothing after the bite but then it screamed off. It was an insane 45 minutes of light speed surface runs and some great jumps. Then it buldged down and we had to push it to sunset to bring her up. A 500 pounder that fought like an 800 on steroids. No wonder as it was hooked on the shoulders. I was happy to have Carl´s experience and expertise on the chair for that one.