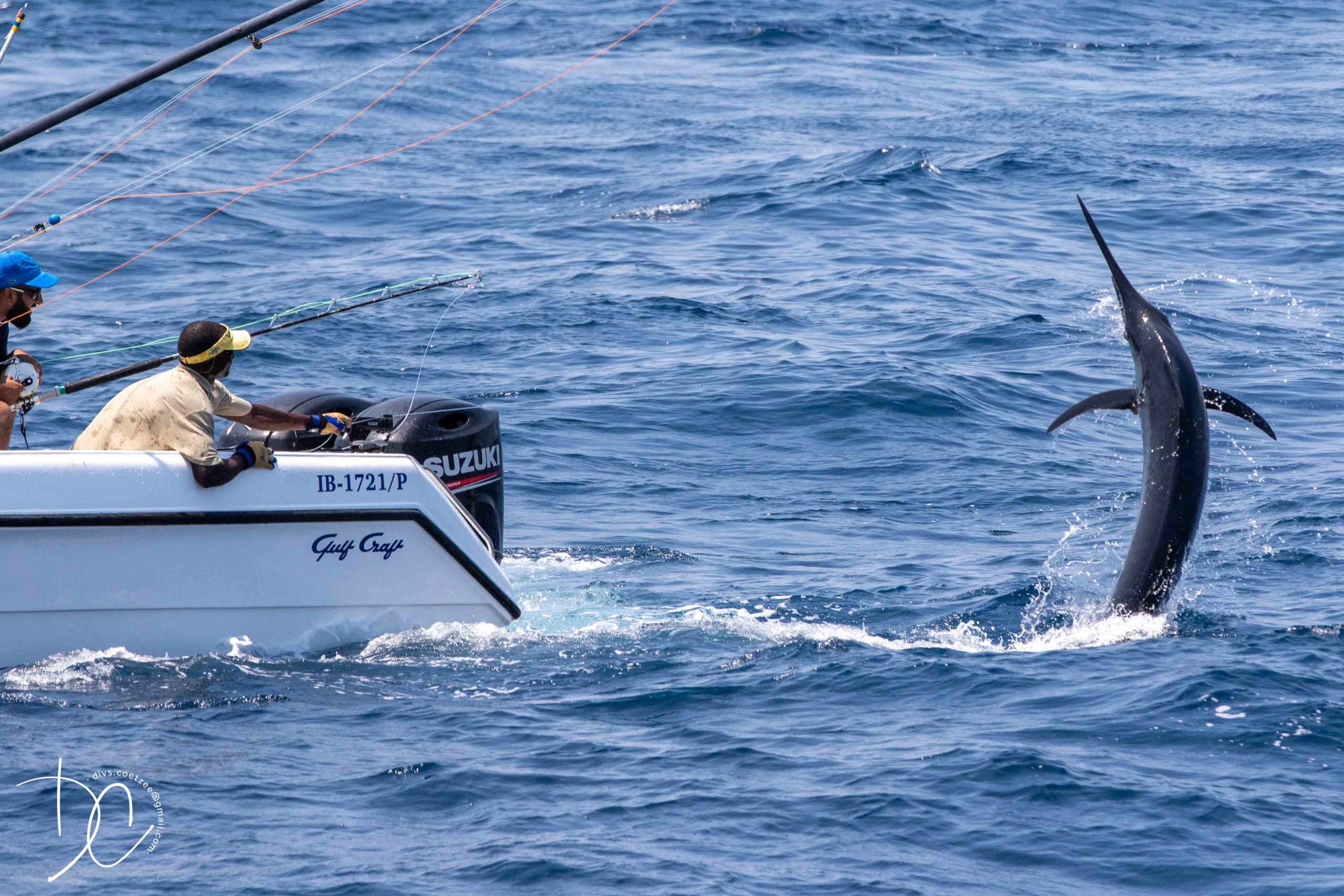 We just finished with a large group of 12 from Malawi, it was Muhammad Osman and his mates first ever deep sea fishing trip and what an experience they had releasing 6 Black Marlin to #700 pounds and catching plenty other game fish including; Sailfish, wahoo, cuta, dorado, Yellowfin tuna, bonnies, skipjack, prodigal son, barracuda, quennfish, GT´s, yellowspotted trevally, Rosy Jobfish, snappers and a few more odds & ends. 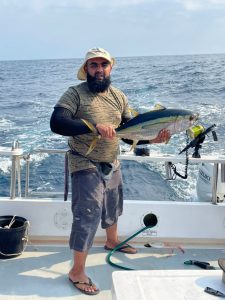 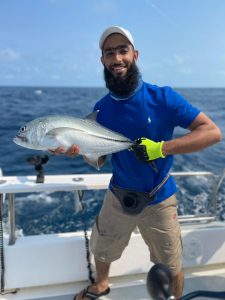 The boys rotate on three boats every day, with 3 fishing with us on VAMIZI for Marlin, 3 fishing on IBO with Alberto alternating Marlin and light tackle trolling and the other 6 with Dean on Game Changer jigging, spinning and popping.

Really nice bunch of guys and what a trip – it’s great when you got 12 guys and 5 days later half of them can say they caught their first Marlin!

And it really should have been more, obviously the being the guys first time did not help but we were also unlucky to have pulled the hook on four fish very close to the boat.

1 from 3 today on Black Marlin and raised another

Really unlucky to have pulled the hook on both other fish.

Lots of action this morning with skipjack and bonnies in the morning, baited a few which either died or were taxed and we released a dusky.

Then on the lures we had all the bites the hour before the low.

Hooked the first fish on the xpress that spit the hook while jumping close to the boat.

Then had two fish up on both rights but only one bite which we hooked and also come undone fairly close.

IBO went 1 for 2 on Sailfish and o for 1 on Blacks and a few other game fish.

Game Changer was jigging and popping and had some good fun on GT´s, cobia, yellow spotted trevally and some other species.

Lady Lula was also out there and they wen 1 for 1 on Black and 1 for 1 on sailfish.

MacFearless 1 for 1 on a tiny fish on light tackle 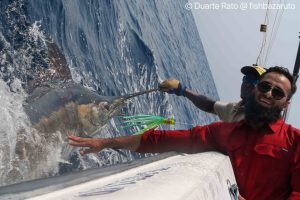 It just did not come together for us, had a really aggressive #300 miss the lure in the morning and not come for seconds. 15 minutes later have a bite on similar size fish while putting a live bait out and fish started jumping wrapped on leader within couple seconds before we even loaded.

Raised a little guy that did not eat the live and lost one by the boat on a swim bait.

But cool day and good bite out there further south…

Game Changer again catching some good diversity of game fish on the jigging, spinning and popping. 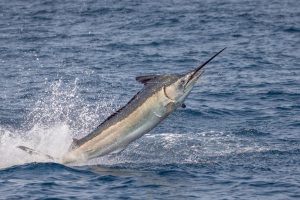 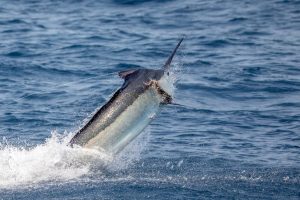 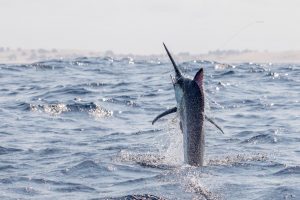 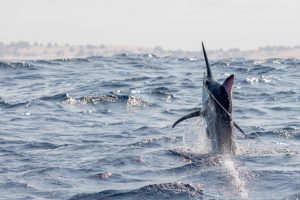 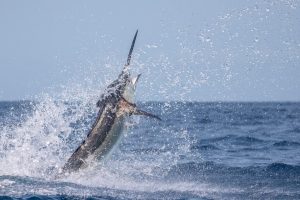 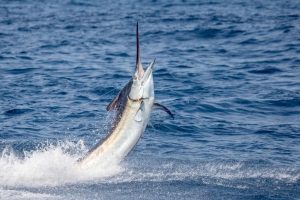 1 from 4 on Black Marlin today on VAMIZI

Boys from Malawi suffering a tad of a rubber hook syndrome and really unlucky to have had 4 fish come undone close to the boat over the last three days!

But, what a busy morning!

Started at Aladdin’s and got a YFT and skipjack in 90 meters north of it, put out and after 20 minutes have a double up on sharks.

Put the lures and got one the Bonito Smoker at 8h25

At 9h33 missed one on express

Around noon we put the dead baits out and half an hour later hook one on the swim bait.

Really unlucky we pulled the hook right by the boat.

Half an hour later missed a bite, again on the swim bait.

IBO lost a nice one on lure at VI mile

1 from 1 today on Black Marlin aboard VAMIZI

It was pretty breezy from the NE today and the sea really messy up north.

But most of all the incoming low pressure all the bait and surface activity vanished.

Started at Lighthouse with lures and worked all down south then with the dead baits from 10am.

After the busy mornings it was strange that no boat saw or raised a single fish until we hooked up at 9 mile at around noon.

While we were busy Spanish fly missed one.

We hooked our fish on the swim bait and what a show it gave by the boat with some boats nearby to get some awesome shoots.

That was the only bite we had for the day. 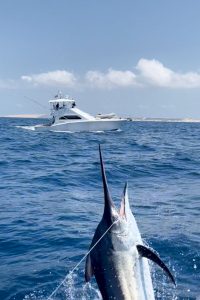 We left early to go and catch bait which in retrospective was a mistake seeing there was a bit if a bite late afternoon.

By this time the guys where hooked on Marlin fishing and asked Dean to put Marlin gear on the boat.

They were jigging at 9 mile but when late afternoon they caught a rainbow runner Dean decided to put it in the tubes and head out.

They had the bait in the water 5 minutes when they had a bite and hooked to a nice one.

It was Salman Osman in the chair and did a great job to get the estimated 700-pound Marlin by boat side in an hour.

First time Marlin again and it was also Dean´s best fish to date.

So happy for both of them.. 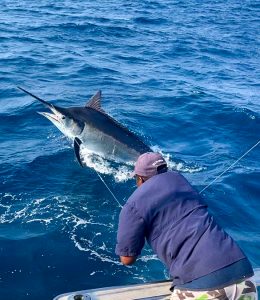 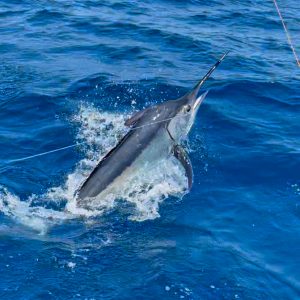 Again, messy out there, this time withs well coming from the ENE and wind from the SE:

Very overcast, water did not look as good and again absolutely no surface activity.

But we made the best of a slow day and

Released one from three and saw another one…

Started the morning bait fishing and got a barracuda at outside 5 mile, a 12 kilo cuta deep of  6 mile and a queenfish at 9 mile.

We fished the dead baits the all day.

In shortage of skip baits the boys rigged the barracuda with a chugger in front. That was an odd and stinking stick bait and I pulled it even extra shirt than normal so it could actually skip and smoke a little.

Well our first bite was insane. I was talking to Morgan on the radio and eyes on that bait when this #300 come out from the inside, shoulders, bill, mouth and all out the water and piles on it.

Hook up, great show by the boat and released that one.

Just after noon had a small guy clip the swim bait out the rigger but no pick up.

This was all outside 9 mile, then tacking back around 3pm we see a nice mid ranger tailing down sea, put the baits right in front of it but no interest whatsoever.

We had two bait rods out close in with the feathers and right before lines out at 15h30 we picked two skipjack baits. While we bringing them in with boat just in gear on one engine, we have a bite on the swim bait. Thinking it was a shark we did not pay much attention to it expect it was a Marlin but we never hooked up.

Game Changer also got some nice prodigal son and good GT´s and other fish on the jigging. 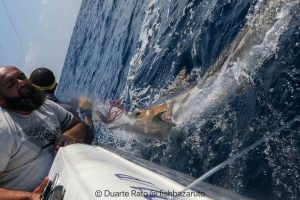 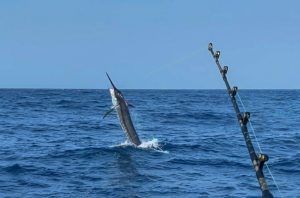 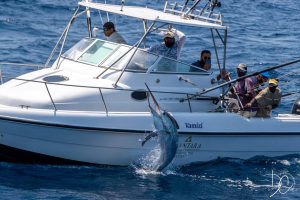 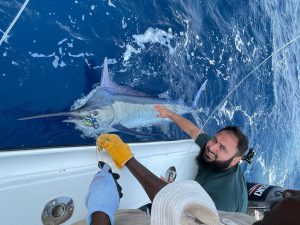 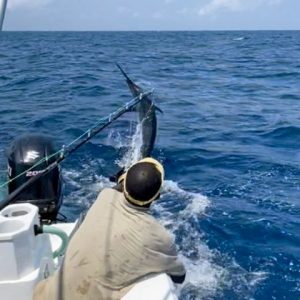 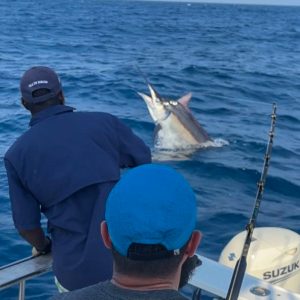 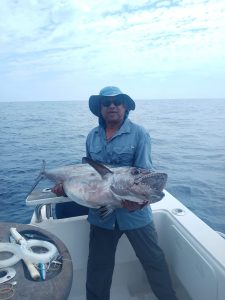 That was it for a great trip and really looking forward to seeing you boys back here next year!

Love it when you hook up new guys to Marlin Fishing!!!

All else is bait 🙂

Day off today back at it tomorrow… 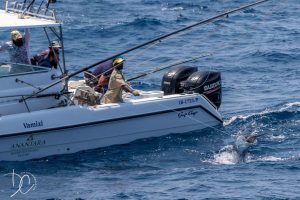