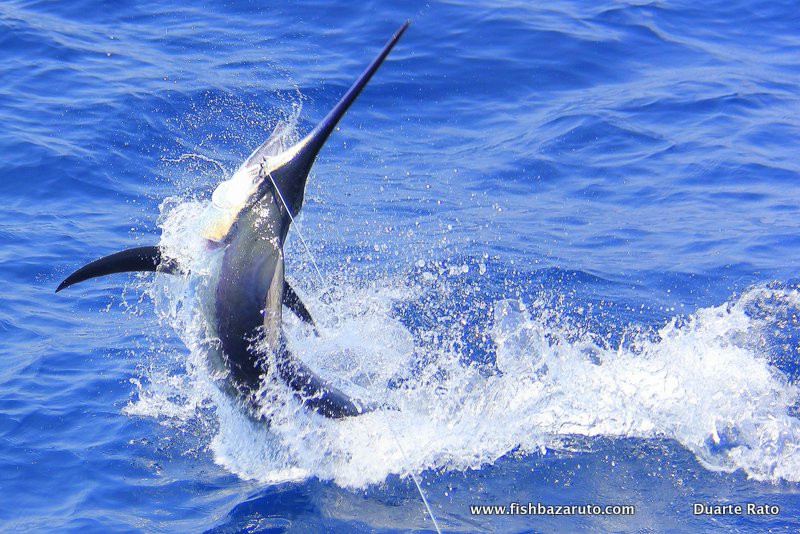 It´s been great fun so far and even when it´s been slower we still getting them and overall there as been a steady bite. Most important tough, there´s has been some seriously BIG fish raised & hooked – what this overwhelming place is all about…and there is still only a couple boats fishing for Marlin day in and day out.

Over the past two weeks there were at least two fish over the 1000-pound mark seen and we saw one that was very close to that. It was the 8th of October, Mike´s Goch last of his four day charter. Having seen three on the day that did not materialize that sight was the perfect end to his trip. We were cruising back home from the 90-meter mark at 4pm where our last YFT bait had been sharked. Being the gentleman he is and knowing I am in need of that cold one by the end of the day, Mike seats next to me with a couple 2M beers in hand. We cheer and enjoy the ride in the flat calm seas. All of a sudden, 50 meters ahead of us there´s a colossal swirl – I think I see a huge bill breaking the surface but it´s all very fast. I slow down at the now oil slick and we can see blood, pieces of gills etc and the smell is electrifying. Just then a huge fish shows up literally licking the paintwork off the transom. I look at the sounder and we are in 36 meters of water!!! The massive Black hangs around for 20 seconds giving me time to get a YFT skip bait from the box and put it out. We pull it around the area for a good 20 minutes but never get the fish up. Both Mike & Alex (my first mate) had a very good long look at the fish (I was trying to get a bait out), and both reckon she looked 900 plus!!! Mike was so impressed by the size of this fish that it looked 1200 plus on his mental measurements! It is a freakish sight when you see one so big free swimming so close to the boat!

But, the biggest fish up to now fell to Ryan on PULSATOR who, early morning four days later, hooked an absolute monster off the lighthouse on a live YFT. He fought the fish for an hour and a half when all of a sudden it was just a dead weight that came to the boat fairly easy. They never even felt the bites (huge bites as you can see on the picture) but the fish was sharked and all they got back was the head and shoulders. After speaking to Ryan, seeing the photographs and girth measurements I reckon that fish was in the 1100 to 1200 pound class – heart-breaking!

The weather and current was an absolute gem for the first twelve days in October and everyone enjoyed some good fishing in superb calm weather. We on VAMIZI, my other boys on IBO, Spanish Fly, Big Bob, Marlin and Pulsator all got into some nice fish. All Blacks although fishing out wide with Riko Sacco, Spanish Fly lost a nice Blue and then had a day where they released a Blue & a Black.

Over that time I also had a couple of game fish and plugging charters and seeing the tides were not great for it, it was slow going on the GT side. But working the plugs and stick baits amongst the schools of skipjack (that were in surprisingly shallow water) we had everything else but GT´s. That included sailfish, wahoo, some really big cuda and then all other usual suspects @ the  reef !

But, as the current subsidized and the light northerly to moderate winds persisted, the good conditions started to take their tool; water getting a tint of green which eventually turned to brown – it was like fishing for Barbel on the edge – this is supposed to be blue water fishing! Make no mistake, there were still fish around but you had to go out wide and fish lures. In the 15 years that have been here the deepest I had released a Black Marlin was at about 240 meters. This last week we raised 12 and got 5 in water deeper than 250 meters and up to 550 meters – amazing stuff and shows how dirty the water and thus the lack of bait in-close makes them go searching – has we had to do!

We had our good friend Carl Jankowitz, who is always a pleasure to fish with, for 5 proper days. We got one on the swim bait deep up north on the first day but then, the water got so bad, the only plan was to pull those lures out wide and we suffer from a real acute bad rubber hook syndrome for the remaining 4 days. We only connected and released 2 of the 9 bites we had on plastic. But hey, obviously with the strange conditions they were just picking at the lures and everyone else was also having a hard time getting them to stick. It was difficult to fish out wide in search mode. But despite being out there in the BIG BLUE without the usual game fish by-catch mayhem we got some decent Marlin action with fish to 650 plus: has did Big Bob, Spanish Fly, Marlin and off course Puslator who had that sharked 1200 beast.

Bazaruto Marlin Season is all about tag and release

Ohhh…and one day we headed in early and decided to go to the closest reef – 5 minutes away from the lodge and catch the change of the tide with light spinning tackle. Slow when we got there and then everything just went on the bite…wild, crazy fun, shot for shoot! Carl was playing in the bow and Alex and myself were sharing an outfit on the back, having our own little competition. In an hour we released 8 small GT´s, 3 big eye kingfish, a bonnie and a snapper! Awesome stuff to end the day!

Finally four days ago the much-expected low-pressure system arrived and it´s been blowing hard from the south making for uncomfortable conditions. But, who cares if it brings the nice warm blue body of water. Yesterday we braved it out there with Jane & Henrik from Denmark and it was inspiring to see fairly good water on the grounds. However, after a few slow hours tacking in 55 to 140 meters I decided to go out wide. We worked the area south of Nhangosse between 250 and 280 meters where we saw a few fish last week and it shaped up. We went 1 for 2 on Blacks. Both fish took the long corner lure; the first spit the hooks after a series of jumps but the second stuck and even if just a Rat Henrik got his first Black Marlin release.

Lay day today & tomorrow. We enjoying a braai  @ paradise and catching bait. Then the wind eases down and we start with Ulrich and his wife Sabrina (who´s on chair duty) from SA. Ulrich has had some phenomenal charters with us in the last few years, so hopefully his lucky charm will bring them ON!

We have been collecting the first ever-genetic samplings from billfish on the Bazaruto Archipelago. I have been trying to get sponsorship for some satellite tags to put into a few of the Bazaruto big girls (it would be so interesting to see where they head) and been talking to Roy Bealey from the ABF who is an extremely enthusiastic fellow who asked me to start collecting the samples for their project along with the Pelagic research network and the Virginia Institute of Marine Science.

Thanks to Morgan and Ryan for the help on this and hopefully will get a few more guys on-board to help out, especially seeing we going into the tournament season the next three weeks.