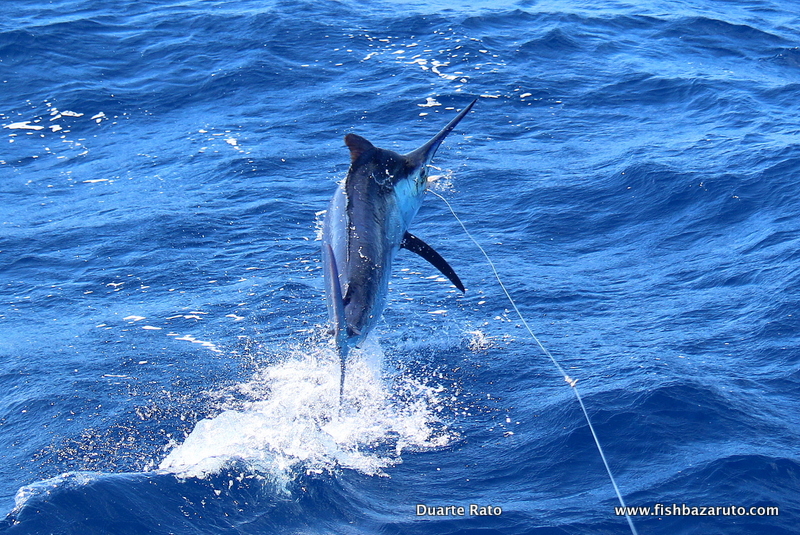 I have been very fortunate to have fished a few of the best and most remote (not a great fan of traffic) Marlin destinations in the World; Cape Verde and especially Bom Bom for surreal numbers, Madeira for the big fish and relaxed fishing, Azores for the experience, Ascension for its rugged uniqueness, Mauritius for the Island fun, Bassas da India, Almirante leite & St. Lazarus for their remoteness, Algarve for the familiarity…etc, etc

But, having chased Giant Black Marlin off my favorite “fishing hole“ on the Bazaruto Archipelago every season for the past 16 years, Australia´s Great Barrier Reef has for well over a decade been right up there at the top of my dream destination. Having had Peter Bristow and other friends who fished there extensively tell me there´s `no other place like it on earth ‘might have had a thing to do with it as well´!

I have had, over the last decade or so, a few opportunities to fish or work on the reef, but with the season being exactly the same has Bazaruto it proved extremely difficult to get away.

Finally, the chance presented itself when Aaron Atkins, who regularly fishes’ with us at Bazaruto, invited me for a 7-day trip to the reef more than 2 years ago. With that lead time I could manage my bookings and I jumped at it. Seeing I would waste so much travelling time I decided that I should stay another week to experience it at its fullest! I spoke too regular´s @ Bazaruto, Carl Jankowitz and Lowutjie Nel from SA and they also jumped at the opportunity.

I must say that after a great start to the Marlin Season at Bazaruto when we were getting good size fish everyday including a good one at 900+ pounds (and the slow reports coming from the reef) it was difficult to leave on my flight to JHB on the 20th October to the start the long trip round the World!

If I only knew what I was about to experience!

After a night in JBH I flew to Hong Kong where I had a full day to explore the city. From there straight Cairns where I arrived early the next morning. Loved the place from the word go and enjoyed a great three days seeing and experiencing the city, having a wild night with my mate Divan who was decking on the kaizen (and later on the Kekoa) and trying to get rid of the terrible jet lag – yeah the crazy nights did not help that side 😉

On the 25th I met up with Aaron and the next morning we had a picturesque 45 minute flight north to Cooktown. Checked in at the Sovereign and met the crew of the 48ft Tradition on the fisherman´s wharf for dinner; Capt Tim Richardson and deckies Garret Penley and Chris Mowad.

Finally, the next day we made out to sea and it was a hour and a half run to the middle ribbons where we put the bait rods and slowly made our way north, catching a few scaly mackerel and Spaniards (cuda) on the way.

At 12h20 we put the baits out at the bottom end of #8 ribbon reef. The set up was pretty simple and similar to what we do back home when running baits. Three baits, normally a big skip bait of the tuna variety short, then a swim bait (mostly scads but also queenfish) and then either a lure, a swim bait, but mostly a skip bait such as a scaly on the shotgun.

Well, thirty minutes into it and the scad goes down and as we load a fat 800 plus fish starts jumping towards us like mad. The encounter was short lived but I still tough I had just died and gone to heaven – an 800+ in the first half an hour! Well, Murphy´s law that would be the biggest fish we would see for Aaron´s trip.

But we did not have much time to lick our wounds and the next bite, about an hour later, stuck and Aaron released his first GBR Black. Then, just before 3pm we get a bite on the long skip bait, loads and peels line for a few seconds before coming undone. Bait comes on top and so does the fish behind it and we tease it all the way to the small swim bait closer to the boat. It switches and we release the second for the day. 2 for 3 on the first afternoon, both around #200, not a bad start.

Good thing as the next couple of days where a complete blank!

We had great fun the next morning catching loads of bait on the light tackle. A bunch of scads, some cuda, mad fish, scaly mackerel and some other number plates. Great to fill up the bait freezer and get out there. However, we worked #8 until late afternoon without even raising one, pretty much what happen with the few boats around us. Nevertheless, a few boats fishing Linden Bank way south of us (+-60NM) caught a few fish including some nice one´s.

Back at the mooring at the bottom end of #9 we had a big school of 2 to 4 kingies (trevally´s) feeding on the tiny baitfish, prawns and squid attracted by the light. It was hard to leave the delicious Tim´s style cuta carpaccio to flick a spinning rod but when you did you where ON! Then Tim got out the fly rod and proceed catching a shit lot of them, one after the other – great fun!

Our third day started at the bottom end of #9 where we went wide off the reef for a while then back and worked down to #8. We again heard of a really good bite down south and Tim decided to start making our way and finished the day at #3. Unfortunately, traveling down to make ground we did not even raise one for the second consecutive day.

We still had a long way to go so early morning on the 30th we run south for about an hour and put the bait gear out. We caught some small Bluefin tuna (first for me or Aaron), king and scaly mackerel and some bonnies. We then run further south and started fishing just before at 11 outside St. Crispin Reef.

Still working south we worked escapade reef and down to Linden where there where already about 14 boats fishing around us. The water looked phenomenal and we had a great encounter with a very friendly whale shark that just chilled out with us for ages. But, after the last two last quiet days we needed to see a fish badly!

At last, just after 3pm we finally got a bite on the swim bait and hooked up to a nice and energetic #450 that put a great show by the boat. Just after 17h30 we get another bite, again on the swim bait (this time a queenie) and released that one at #125!

Nice to catch a couple and see some more fish caught around us, including some pretty nice one´s!

After a nice dinner and sleep at the bottom end of Opal we made bait for around 2 hours and started fishing earlier than normal. A great call as not thirty minutes into it we hooked one which we let go at #250. We then have a long quiet period although we did raise another small one on the long bait.

Just after 4pm we get a bite, again on the left swimming scad and a fish about 600 starts jumping as soon as it starts loading, jumping towards us like a ravaging bull, we full ahead and lines starts peeling off but just then it comes undone. Another 40 minutes and we another bite this time we hook up…however the fish comes off on the leader. Not knowing what has just happen we see it slowly swimming towards the surface and head shaking. Tim back´s up and Chris is quick to tag the free swimming fish; it went down as #250. 3 for 3 on the day and raised another. It was great seeing everyone hooking up around us from 4h30 onwards and as we slowing making our way in at 18h15, Calypso not 200 yards on our port side, hookup to a really nice! one not 200 yards away. They let that fish go past 9pm at over the mark…

The first two days had blown a stiff 25 knots from the SE, but it got progressively better. The last two days had been pretty calm but our 6th day was an absolute beauty – something that would remain for the next 9 days until I left! Absolutely beautiful calm flat sunny weather!

Again we started earlier than normal after a short bait session and as we are putting the baits out Moana hooks up right next to us. We had a couple of wahoo chop off´s and finally at half past one we see a small fish come from far behind and inhale the swimming scad. Aaron made short work of it and we get the #150 fish to the boats for some awesome jumps and great colors. Not 10 minutes later we get a bite on the long skipbait and hookup to a better fish which we let go at 450 lbs. At 16h40 great bite on the scad swim bait again, hookup and released the third for the day at #700, Aaron´s best fish for the trip. But not all was over, and there was action all around us. In the last half an hour we got another 2 bites but unluckily missed both of them.

3 for 5 for the day up to 700…pretty cool, and awesome to do it in flat calm water. Pity the nest day was Aaron´s last day and we had to leave the bank and make our way north for the changeover at Cooktown!

We left Opal early and made bait catching a really nice cuda and a queenfish and then run for a while. We finally started fishing outside escapade and worked north. At Escapade we missed a bite and then had a couple of wahoo chop off´s as we made our way to the #1. The plan was to leave to Cooktown at 16h00 and we pretty much tough that was the end of it when nothing had happened until 16h45!

Well…not so within the next 40 minutes (we did leave a tad later) we went 2 for 3 for a perfect finish.

First we released a #250 on the swim bait, then we had one on the skipbait that pulled after a minute or so and we ended the trip with a small guy about #150.

Back to Cooktown and although I come from the land of magical sunset´s that evening´s sundown was absolutely mind blowing!

That night Tim had organized a feast back at the fisherman´s wharf and we had an amazing dinner where the plates just kept coming! First we had Kangorro, beef and lamb. Then a seafood platter with smoked salmon, oyster´s, scallop´s, steamed prawns, deep fried calamari and some other sort of clams I did not recognize. Next up was a big plate of mud crab curry followed by another of delicious tempura prawns and soft shell crab…delicatessens from the outback 😉

Number´s for Aaron´s 7 day trip (with two blank days) where;

Obviously and especially knowing of a few real nice one´s caught around us it was disappointing not to get a beast (after all that´s what the back of everyone´s mind coming to the GBR)…but a #700 is a great fish anywhere else and the numbers where great. Most important it was great fun…

Interestingly enough about 85% of our bites where on the swim baits which gave us a good conversion, something that would change quiet drastically the next week…

A million thanks for the invite Aaron – it was great to share such an awesome trip with you!