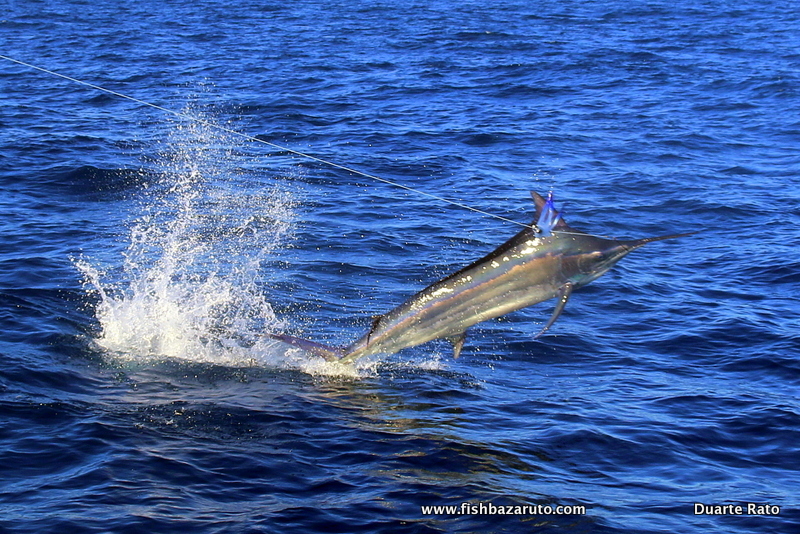 Fishing in Mozambique over the last two months was atypical to say the least. Lots of up & downs with some uncharacteristic conditions at times, which was hardly surprising, with the two cyclones that hit our coastline over this time.

We were hardly directly hit but these two massive systems down south, but that does not mean it was not felt, in one way or another. Cyclone IDAI, put link that ravished Beira and surrounding areas in Mid-March, was one of the biggest to hit the East coast of Africa in many years.

But, besides some heavy rain and massive swells, we hardly felt it in the Vilankulos / Bazaruto area. However, the fish did and surface fishing for that time was pretty sluggish, with the normal Yellowfin action somewhere absent. Generally, light tackle trolling, which is normally pretty good during this time, was slow. Very few boats where targeting Marlin, although a few small to mid-range Blacks where caught.

However, the jigging and popping did produce some quality fish with some decent GT´s coming out.

Further south in Santa Maria the tail end of the Blue Marlin season was superb. Fishing in Mozambique in that area this time of year is absolutely phenomenal and we have reported our 2019 charters elsewhere;

The area´s Blue Marlin fisheries (along with some sailfish and striped and Black Marlin action) starts in October and stretches all along to early May, making it not only a great numbers fishery but a long season as well. Our favorite time to fish the area is from late February to mid-April, when the weather is more reliable and normally flat calm and, when bigger fish tend to show.

Fishing in Mozambique this time of year and all the way to June normally offers extremely placid weather. This year it was not as consistent, but, the many charters we had either from the Island (Bazaruto) with the boys, or from the mainland (Vilankulos) enjoyed some brilliant calm conditions. Into April the game fish started to show much better, and even though at times it was not as prolific as April normally is, most groups had a great time with a good diversity.

Most where mixing it up between light tackle conventional game fishing, light tackle spinning and popping and jigging. We also had a couple of successful fly fishing charters and even a group that wanted to almost exclusively fish for sharks. As is well known this is highly effective anytime of the year on the Archipelago, and the guys got a good number of different number plates

Fishing way up north, bludgers, yellowspotted and other trevally along with other gamefish, including some big barracuda´s and especially crocodile cuda, where showing pretty thick. Here´s a couple nice one´s Bruce Cook caught for his clients.

We had the grandparents here and also did a few road trips with the boys over April.

We went to tofo, Morrungulo and BD point, where we had not been for almost 20 years. Prawns and crayfish at 200 MT a kilo, a beautiful setting and some extreme light tackle shore fishing for the boys.

We stayed at Lulas Paradise, great place with amazing hosts. Jakkie and Boet Boshoff have made huge efforts to stop netting and all sorts of fishing in front of their place. The difference it as made in a short frame of time is staggering. Every morning we saw birds working various schools of bonnies and queen mackerel in the estuary and the little sanctuary they got on the pier in front of the lodge is something to behold.

I was awakened everyday by the boys at first light to go and feed the fish and snorkel. The excitement of hand feeding River spanner, big bustard mullet, groupers and all sorts of other fish and then snorkel with them was unparalleled for the boys. Then, every day we took a long walk and fished of the beach and Duarte Jnr. had a ball releasing small kingies, garfish, crocodile fish and all other sort of critters. The few small skiboats in the area went out for a couple hour spinning sessions in the estuary every tide and caught in excess of 20 to 30 king & queen mackerel every outing.

Light tackle fishing in Mozambique at its best.

Early May we had Wolfgang and the gang here for a few days.

Last October they had their first ever Marlin fishing experience and one can say they are literally hooked.

You can see their October charter report here;

This time the boys decided they wanted to target Marlin again. Conditions where not ideal with water temperature in the 28c, something unheard off in the area in early May. But then again, so is having two massive cyclones, one of which, as late as late April.

We did good nevertheless and in flat calm conditions released a Black Marlin and raised another, released a 450-pound Blue out of a double and missed another two and released 2 sailfish out of 4 raised. There were some dorado, wahoo and a few other game fish to compliment the trip. Looking forward to seeing the guys once again later this year in November.

The water as now cooled down and for the last week or so boats are coming across more and more sailfish pods. The mild winter conditions are settling in and apart from the sailfish we should see large and very good numbers of wahoo moving in. If the last three years are anything to go by we should see an excellent wahoo bite over the next few months. Dorado have also been abundant and after an enigmatic lack of yellowfin tuna they are finally starting to show.