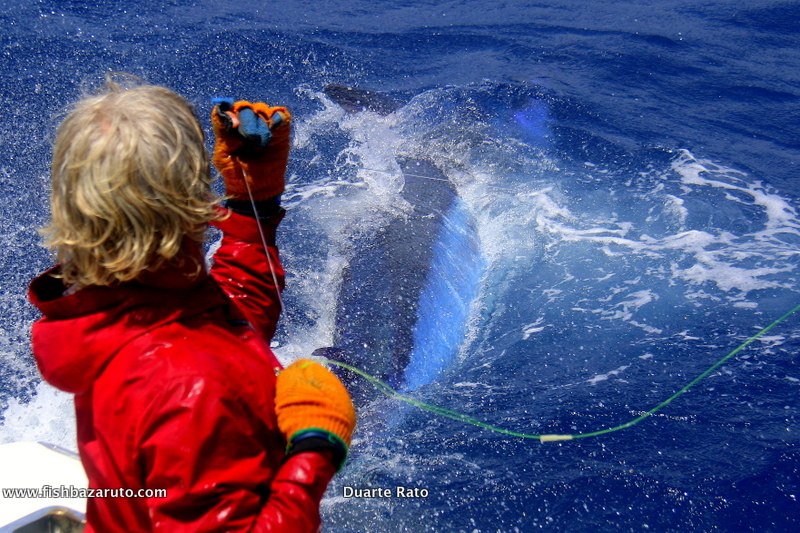 Dave, Michael and Louis charter had started a tad slow but the last three days, although not on fire, had been pretty cool and we released 4 out of 7 fish and raised a couple more. We had also jumped in underwater with a Blue on the release, had caught some Marlin on the pitch and overall where just having a hell lot of fun!

So far, all the fish had been on the smaller size between 150 to 300 except one, that had been foul hooked on the shoulders on a lure, which had obviously given us some grief, pushing just over 400 pounds.

It was the 28th of May and once again we were working the northern side on the channel between Mindelo and Santo Antao. As is usual for that area the NE was funneling through making for very” sporty conditions”.

We had seen nothing the all morning when at 11am, as it happens, and out of nowhere a big fish piled on our shortest teaser, the Aloha Smash Bait. This was a different class fish altogether and as we do has standard operation modus, in case there´s a second fish we did not see, both pitch baits where out in a flash.

The fish come on the right pitch, smoking on the first wave, a mere few meters from the transom. What happen next will forever be imprinted in mine and everyone´s else’s mind forever. This was right up there amongst the three best bites I have ever seen…and everyone on board, including Matthias who has seen a “few” pitch bites, agreed!

Marlin on the pitch is just a different ball game……INSANE!

The fish come on the bait and made a huge turn, swirling from the inside out and as it took the bait it literally come horizontally out the water. It was like it had springs. It just popped, all 750 pounds of it, completely out the water and then it crashed back into it. I could almost swear I even heard him growling!!!

The funniest thing was what was heard aboard the Smoker straight after by everyone in utter synchronicity…..

Dave jumped in the chair with the outfit we use for the pitch, which is basically a 50-wide loaded with #130 mono top shot and #130 braid backing into an 80 stand up outfit. As they almost all do the fish started running up swell and it was difficult to keep up with it so we set Dave on the stand-up harness and spun the boat to give chase.

What followed was a grueling hour fight with the fish diving deep but twice coming up but just keeping out of leaders reach. Eventually into an hour and a quarter we finally got on top of it and Luis managed to get a good wrap on the fish for the release…

Here´s a sequence of the fish on the wire….