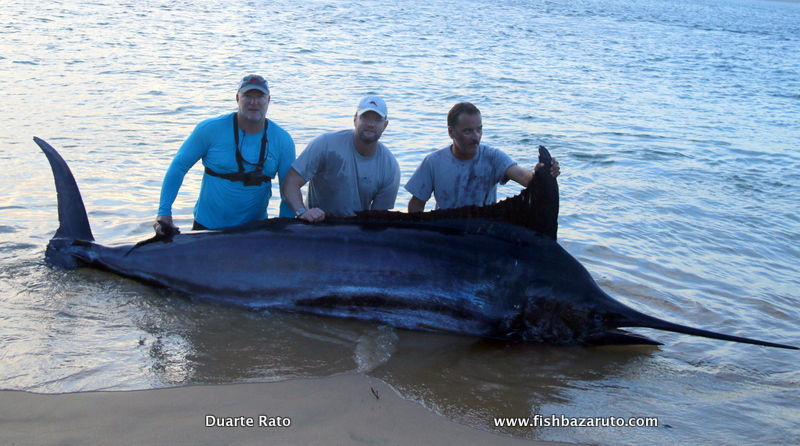 It´s real cool when a plan comes together in completely unexpected ways!

Over the last decade or so, we have seen, released and weighted a good number of Grander Black Marlin of the Bazaruto Archipelago.

We have also caught a few Blues around the mark elsewhere, especially in Madeira, Bom Bom and the Azores, but the biggest we weighted was #987. Almost a Grander Blue Marlin!

But, despite a couple estimated over the mark having been hooked, the biggest Blue, that we know off, weighted at Bazaruto and Mozambique was somewhere in the high 800 pounds, many moons ago.

However, this area produces exceptional numbers of Blue Marlin, but was not known for their size and the biggest ever caught was just over 600 pounds.

Then, last week on the 5th of March, our first day out, we proceed to catch what could very well be Mozambique´s first ever Grander Blue Marlin!

Being based in Santa Maria, and despite our best efforts we did not manage to get a scale to weigh the fish and thus always debatable if it was over the mark.

But, this was the fattest one we have ever seen, and there is very little doubt in my mind, otherwise I would have called it 950 plus!

On the formula, she was just over the mark!

Amazingly, the angler, Carl Jankowitz, who has seen his fair share of Giant Blacks off Bazaruto, weighted his first ever Grander back in 2010, a fish that had the exact same measurements as this one (137×74).

Whatever way you look at it, it was a beast of a fish, so here´s the story…

While fishing with Peter Bristow on the Katherine B off Madeira last July I came across Marcelo Matos, a good mate, who was there to fish the 4th of July BMWC. For a few years, I have been coming down to Inhaca Island to experience their amazing seasonal numbers of Blue Marlin and have been wanting to bring a few loyal clients down there for a while.

Seeing Marcelo owns a beautiful Villa in Santa Maria, a mere 15-minute ride to the fishing grounds and a 31ft Yamaha boat FourPlay, we got talking and agreed to do something in March of this year. I made a few calls and our good friend Carl Jankowitz, who has been fishing with us for 15 years, jumped at the opportunity and booked the first slot. Along with him was Rian Chalmers, who had fished with us for the first-time last October, when he weighted a #814 Black that got tail wrapped.

After a few days of preparation, which meant taking 700 plus lts of fuel to the Island, along with everything else from groceries, tackle, drinks, food, etc we were ready to go. Mid-morning of the 4th of March we picked the guys up at the airport and after a sushi lunch at Clube Naval we got on the boat and made the hour ride to St. Maria in flat calm seas.

Seeing negotiating the surf channel at Hell´s gate is better at high tide we had an early, 5h30am departure the next day. Within half an hour we had set the spread just after Banco de Santa Maria and tacked due east to fish the 300-450-meter mark area which has been so productive the last few years.

The team at Pulsator lures had just sent me a few jewels from their stables which were in the water except for the long corner position where we had a Phoebe 60 from Bahamas lures that had worked really well for us in the area. Everything look stunning and as the day progressed the seas got even better and the four-lure pattern worked beautiful in our wake

As we got to the chosen area we had a double, dorado strike. Not one stuck but by midday we had landed four nice dories. But, despite these being around, disappointingly it was very quiet with no bait on the sounder or surface, no birds, no rip lines and there was a disheartening tint of green to the water. Except for the Dorado we had no further action for the day and at 2h30 pm decided to start heading back, the plan to troll all the way inshore and just out the mouth to maybe pick up a Black.

After the long hot day, everyone was pretty chilled, silently watching the lures which looked great with the sun on our bow. Out of nowhere, about 40 minutes later in about 170 meters of water, this huge fish just inhaled the left short lure with, shoulders out the water inside out bite that left everyone in awe. The fish then turned on its axis and jumped three or four times, sideways and over our long right line.

Carl got in the chair and come back on the drag as we cleared and slowly started turning to our port side. As soon as we could, we turned and chased. The fish come up close to the surface a few times but it never jumped again, albeit it was a real fun fight for the next hour as she kept changing depth, pace and direction. Expertly, Carl worked the drag, pushing it as far as he could anytime he was allowed.

But then, just after an hour she started to slowly track straight with the current and then come to a halt.

Luckily the fish was not very deep but still with an 80W reel and rod (#130 line), knowing she had died, Carl immediately went to the corner, low gear and I drove the boat on very tight corners (which is the best way to plane a fish up on an outboard boat). Helping to hold the spool with his hands as we went around there is always a stage where the pressure comes off and one can wind a few feet. It´s a slow, hard, laborious job but inch by inch she came up and just under the 2-hour mark she was on the leader and next to the boat.

There was hardly any time for celebrations, chit chat or measurements. There was no way we were going to be able to boat this fish so we had to tie her alongside FourPlay and make our way home. Making sure we went through Hell´s gate before dark and before the big spring tide started to push out.

Making many phone calls in order to try and get a scale on the way in, we made it just before sunset and at the end of the incoming, luckily it was flat calm and we proceed to get to shore to take a few pictures before it got dark.

It was when we pushed her on to the beach and along with an additional three guys to help us,that we rolled her upright and saw the exceedingly huge girth on her. Those short chubby fish can be deceiving and we had called her 800 on the bite and even when tied up on the boat. We could see she was wide but not seeing her from above one has little idea on the real girth. Taking mental measurements, I told the guys I was pretty sure we had a grander. Marcelo was on the phone trying to get a scale, to add to the pain we were told Gary Larkan had left with a scale that morning. Carl put the tape around the tail and said it was over 20 inches – but that means little!. We then did the short length and it came to 348 cm (137 inches). I remembered that was the short of the 1 098 lbs, which we had also called 800 on the bite and by the boat. This thing was much fatter and with a mid-girth of 188 cm (74 inches) it was certainly right up there.

By now it was dark and we had exhausted all hopes of a scale so the boys proceed to cut her in portions to be divided amongst the locals and friends. It’s always sad to see such a fish dead, but one knows that here, absolutely nothing goes to waste.

If she was over or not we will never know, what is certain is that despite of having this fish die we all felt elated and the Black label was flowing that night.

Enough for a late start the next day!!!

We paid our dues with an appalling hook-up ratio the next couple days and next week we start another 6 days with Ian and Dean from SA. Hopefully we will have the same gorgeous weather and as much fun as we did this last week. But, that´s a story to come!

Thanks to Marcelo and Rian for the good times and well done to Carl who might very well be the angler with the most post War Giant Black Marlin in Africa and the only one to have caught a Black and Blue over the mark in the continent.