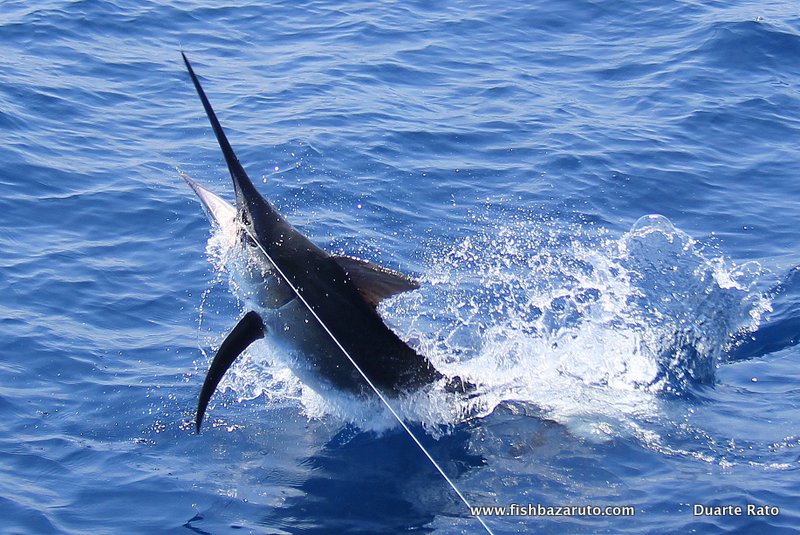 Helloas from Mozambique. After an auspicious start in September its turned out to be a slow start to the season on Bazaruto. Conditions have been tough. Strong and shifting winds. Lots of it from the Beast from the East. And then swinging on a daily basis. Coming from all sides. We may start with a SW, going to the NE, back to the East and finishing off with a stiff SE. Or the other way around. Not good for fishing. Been hard going to say the least. Some fish around, but lazy. Refusing live baits, picking at the lures.

Unlike the last few years in Mozambique Bazaruto Archipelago, when the peak in numbers and certainly big fish was right from early October. Last year we were on double the fish we are now and plenty over # 500. We still getting a Marlin or sailfish most days but it’s just not firing!

Drifting in tough as one does on slow days. I go back to 2012. That was a slow start as well. Remember it was Kevin’s Hodgson´s first season here in Mozambique. He had Jason Holtz driving the Big Bob, Brian Toney was on the deck. It was a poor start to say the least. Slow pickings, small fish, hard going!

That was that until right to the end of October. Then we had a big blow. Serious 30 knot plus winds from the SE. No one fished for a few days. I remember sitting with Jason at Clube Naval. Both of us despondent on what we had seen so far. For me it was the first ever season with such a slow start. For him was his first impression of Bazaruto. It was not good. Lack of bait and activity. But I remember telling Jason as we desperately waited for the blow to come through.

This, will be the turning point in the season. When this subsides, it will start firing!

And so, it did. Jayson had a great November and caught some pretty good one´s including a few north of 800. Mainly down south, at a place we now call Big Cunt corner. I had some great fish as well and in mid to late November we were hooking up and releasing big fish on an almost daily basis. After such a slow start, it was not a season to go down on the books in terms of numbers, seeing it was pretty late. But, that late bite did really make it. It was epic for a while. Enough to make us smile right into early December when they were stacked up at Giant´s.

As we sit on land now with a big SE blowing for a few days, we just hope this will be, once again, the turning point of the season.

Once again, we still getting a Marlin or sailfish most days. Along with some really good dorado, big wahoo and some tuna. It´s still good when it´s slow here! And, we have had great people to share it with along the way.

It was great having the family here a few weekends ago.

Pity weather was to sporty and could not take Duarte Jnr. out. He was so keen and sad not to get out it was heartbreaking. He did fish all day long in front of Clube Naval on the spinning gear. One thousand casts. No fish. The patience he has for fishing as to be seen to be believed. He did get a few lessons on the real deal as well 😉

Another year and think his ready to go get one…

We also had Christopher Bettany and some mates. Christopher owns Azura Retreat Lodges and it was his first time here. Hopefully not the last and if we get a cancelation he wants to be back next year. Knowing how much he enjoys fishing and seeing he has done it his all life, I was surprised to hear he had never caught a Marlin. Pretty keen to change that, it was not to be this time. Conditions where poor and time was not on his side.

They were really unlucky with the weather for all the time they were here. No current and big winds. And, unfortunately, time was not on their side. Two and a half days and we raised 3, got 2 bites and hooked a 400 on a lure that pulled the hooks. Got a massive 500 plus Zambeze. A Sailfish and some nice dorado, the biggest 16kg, big wahoo and lots of Yellowfin tuna & skipjack.

In the meantime, Ian and Brian from New Zealand started with Christiaan on IBO. This is there third trip to Mozambique, having fished with us the last two years. Great guys and we had a good one last year despite being late in the season.

You can see their last year´s trip here;

Duncan and Dave Royston where also back after 6 years.  A pleasure to fish with, great guys, who in the past have had tremendous fishing with us. The first year they fish with us was back in 2010. In their 6 days that year they raised 17, with 9 strikes and 5 releases. That´s including their personal best each. Both with a fish we called 950+. Both could have make it and I certainly think Dave´s fish, being extremely fat all the way to the tail was over the mark.

The next year, 2011 they raised 20 for the week converting into 15 bites, 10 hookups´s and 7 releases. 2012 was much quieter and we mention the slow October we had back then.

This year we fished for 5 days and although we found some fish it was hard going as they were only picking at the baits. We ended raising 8 fish with 6 bites and 3 hookups for one release. Along with that come a couple sailfish, some good dorado and some really nice wahoo´s. Plenty tuna and skipjack.

Now, our good friend and regular Ian Du Plessis is back along with Jaco and Gideon.

Here´s their report for last season.

We did not see one the first day but released one yesterday. Now we sit at Clube Naval waiting for the maelstrom to pass.

The turning point in the season or so we hope. One day on dry land and getting land sick. With a such a big blow for so many days it´s going to be hard going. But, weather or not, we will get back out there on Tuesday. Might even put a few GT sessions before that.