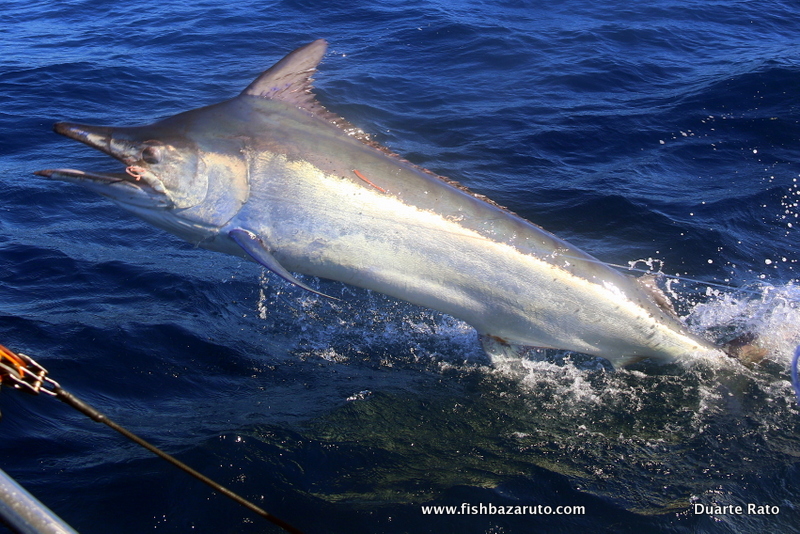 “Marlin Bonanza: The marlin fishing off Bazaruto Island in Mozambique is good and staying good. The water is warming, and the bite is on. Captain Duarte Rato is so busy he has me doing his posts!” – Xonalanga (The Sardine News)

Water still a bit on the colder side but it’s just turned to 25c and weather not the usual November lulls. But, what matters is that they spanning and we making a good job at the opportunities given to us.

Not easy to catch but there´s loads of baits out there and fish are behaving oddly; some days’ real aggressive bites and other´s real lazy. Even on the same day we will have some that just pile on it and other´s that will refuse a live bait. Actually, the number of fish that we and other boats have had refuse live baits is astonishing. Actually, what they doing is smacking the baits and then leaving them. This past few days we had two fish follow the baits for a long time. One actually 20 odd minutes and the other 36 mins. Whacking them more than one time and then just leaving them.

Fortunately, those YFT are hard ass and they just keep going until we find one that wants to eat!!!

So, we finished with Riaz and Mohammed on October´s last day.

That was a pretty brilliant It was a brilliant 3-day charter where we raised a total of 12 fish. Had 8 bites out of them and released 5. The best fish was a #700 pounder.

You can see the report here;

And the marlin bonanza rolls on…

No rest for the wicked…

Peter and Andre, from Pretoria, SA arrived started with us the next day, the 1st of November.

There was a northerly breeze in the morning, but it subsided as the day progressed and it was beautiful out there. The day before we had raised 8, got 5 bites and released 3. All on the baits. The fish would come up on the lures but not take them.

Started the day looking for bait.

Got a bonnie and put it out at VI mile and worked south with the current. Unlike yesterday absolutely no surface activity. And, unlike yesterday, when they would not leave it alone. Literally all you had to do was put a bait in the water to get a bite. Today nothing!!!

We pulled that bait for three hours without a nimble. Go figure!

Put the bloody thing in the downrigger.

When we went past sharkville I decided this is not where I wanted to be.

Put the lures out.

Work back against wind and current for an hour to get to Giant´s.

Picked up a dorrie.

12h34 on the clock and unlike yesterday we get an insanely aggressive bite.

Inside out. Small but aggressive fish.

That´s on the short corner. The Wriggler from Pulsator doing the trick.

Before it clipped out I KNOW we are hooked up.

It´s amazing how some fish are just spirited. This thing was 200 pounds but what a show.

Peter in the chair for his first ever Black. We had the leader but Alex had to drop it. This thing goes down and we come up to 50 pounds on the drag to bring him up. Still a few jumps left in him.

An hour later I am working up and down on the pinnacles on the inside of Giant´s. Especially the two southern one´s where we been picking bait. Go almost to the northern edge of II mile and as I leave the last pinnacle another small fish, this one just under 200 comes on the Ruckus. Followed for ages.

Then it makes up its mind.

BUUUUUM, we hooked up and Andre jumps in the chair.

Aphrodite got a small one in the morning and Sgumfemfe a nice one about 750 on a bait.

The second day started with a fresh, 16 knot southerly blow.

Very overcast the all day and we even got a few showers.

Just before 9 we get another insane bite on the short corner Riggler. The second best bite this season, beauty to see and I am amazed the fish does not hookup. Small fish again, but very aggressive.

It piles on the short rigger lure behind it and hooks up. The green machine Marlin magnet!

Great show and Peter releases it at #150.

We then work the inside pinnacles of Giant´s and get 3 YFT. Bait two. One gets sharked in no time at all.

An hour later we raise a Marlin on the other bait. Small fish around 200 pounds. His there and we get the bite, but then the unexpected happens. A Hammerhead come´s in and literally stole the bait from the fish.

We get a few skipjack and then another 3 YFT. They big baits so we pick a skipjack on the spinning and put a YFT and skipjack out. Work for an hour, skipjack gets sharked and wind starts to pick up. Looks ugly. We pick up and make a return home for a few whiskies at the bar while watching the rain, thunder and wind!

Sgumfemfe continues their big fish run from yesterday and hooked a real nice one on the lures.

They cannot revive the fish and boat it. It goes 790 pounds.

Quatro got a 600-pound fish up north!

The third day was a Blowout…

Sgumfemfe had their own Marlin Bonanza. With, two great back to back days releasing a 750 on a bait and then hooking up to a big girl again the next morning, this one that died and went 790 on the scales. Jam Packed where unlucky to have an estimated fish of around 500 get sharked.

After a tad of wind from the SE in the morning it calmed down. But it turned to the beast from the East for most of the day. We don´t call it a beast for nothing. The fish just don’t bite on it. Period!

Started with the lures at VI mile and soon get a skipjack. Within 10 minutes have a 250 fish on it.

It takes the bait and then just drops it. It proceeds to be on the bait for the next 24 minutes. Then finally it takes another bite at it, but drops it again. This time killing the skipjack.

We put the lures and work Giant´s and lose a dorado and a YFT. Decide to go and have a look at Sharkville. On the way, there we pick up a nice fish on the bait rods.

Going over the northern edge of II mile, just past midday we get a bite on the long right. The fish, also looking about 250 runs and come off on its first jumps. Ishhhhhhh!!!

Andre then picks a good fish on the bait rods. Great fight and he gets a 18 kilo YFT.

A tad too big to bait we decide. Although there´s more skipjack showing around sharkville, not much happens there and we come back.

MacFearless gets a 250 on a live skipjack, Veleiro missed one on a live bait and Jam Packed missed a small one on a lure and had a 500 that was sharked.

Not enjoying this countdown. We got 3 three days ago, then 2, then 1 and no fish today.

Jokingly I said we can start with the three again tomorrow!!!!

A bit of a northerly early but it turned out to be a beautiful day.

We put the bait rods and in no time, get a big Yellow spotted kingfish.

Then there´s YFT all over the place. We get three nice YFT around 8-10 kilos.

Bait two but in 5 minutes one of them dies.

We have the larger one out.

Another 5 minutes and a nice 500-pound fish comes on it.

We all traumatised by yesterday´s event on the fish on the livie.

No worries, this thing pounds on it and we hook up, the circle right in the corner.

Great fight, lots of jumps by the boat, very healthy fish. Strong on the leader.

That´s what I am talking about!!!!

Went in to look for bait but it had all gone down.

After an hour decided to put the lures and go have a peak at Sailfish Bay. When we get there its full of bait, skipjack, YFT and loads of small stuff. Loose a skipjack and then pick up an 8kg YFT and put it out.

Work south and shallower and when we get to 73 meters we have a nice on looking in excess of #700 coming on the bait. It picks it up and then drops it.

This thing is then on the bait for 36 minutes. Insane stuff.

We do everything in the book. Slow down and let the bait go deep. Tight turns. Put a lure out and reel it fast past the fish. Take the insides of the bait on the boat and smash the stomachs for smell. She whacks the bait another two times and drops it.

We pull in the YFT. Still swimming but looking all scratched up.

I stop going around the area and do a straight south tack.

Fifteen minutes later in 85 meters we find another one.

Get a bite but do not connect.

The fish comes again and we hookup.

It does nothing at all so we just reverse as it trashes on the surface. Alex grabs the leader and does not let go. #400-pound fish in less than two minutes for Peter. Right on!

We go shallow where there´s plenty skipjack schools. Troll around them with the bait rods. Do some spinning with the GT ice creams right on to them. Nada. Not one bite.

We put the lures out and start moving south to check Giant´s at the end of the incoming.

As we move south the pockets of skipjack start to fade. Move north again. Nothing, all bait gone down. Start heading south to head for home.

We normally stop fishing at 15h30. Its 3 minutes’ past and the boys are having a brandy and coke. Andre tells us it’s not finished until the fat lady sings…I say it better sing quickly ´cause as soon as we hit 45 meters we pulling them in.

15h33, 49 meters of water and a fish comes in to the bonito smoker on the long corner. Knocks it out the rigger. Then it crash strikes the express on the long and hookup.

Andre jumps in the chair and makes quick work of a very acrobatic #200 pounder.

Great show on the leader.

Perfect way to finish it off.

Very cool four days with the guys, releasing 5 on their marlin bonanza trip with FishBazaruto.com.

Marlin Bonanza: and the fish just keep on coming!

Pretty cool numbers and action…the only thing missing is for a really big one to show up…right up there!