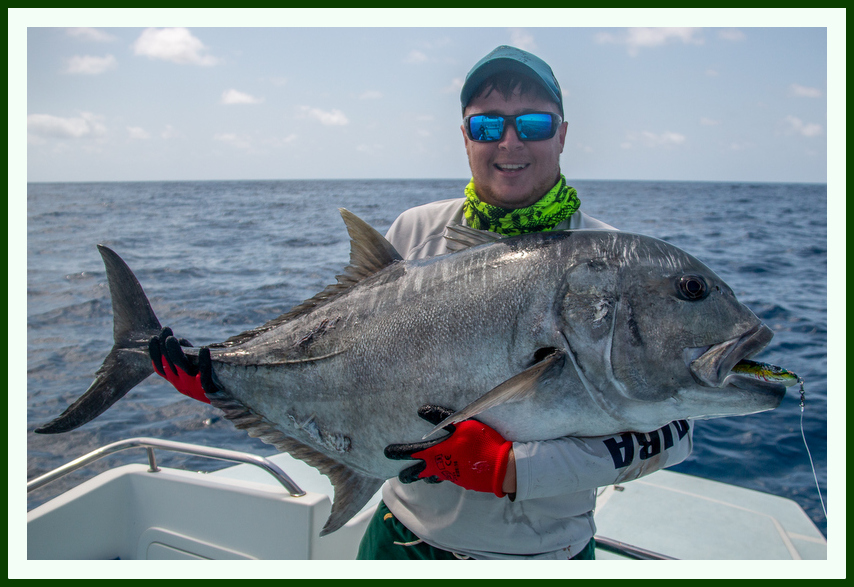 By the end of November our good friend and client Wolfgang joined us for a long weekend, this time with a gang from his primary school days.

Now Wolfgang first fished with us at the end of October 2018. It was an odd trip with a very happy ending. The first two days being real slow and then, at 1pm, on their third and last day, the bite come on hot and wild. In the space of two hours had five bites and released three fish of #500, #400 and #300 pounds.

Sure enough, Wolfgang was hooked and become a regular visitor to the Archipelago…you can see that first trip here;

This time they stayed at VDP in Vilankulos and fished on the 38ft SuperCat GameChanger. As I was still busy on the Island, they fished with Christiaan Kruger, who works with us during the Season and has been doing really well.

They flew in early morning on the Thursday and, went out for a couple of hours’ light tackle game fishing followed by a barbecue and lots of 2M´s on the north point of Benguerra Island.

The second day they went for a double tank dive on II-mile reef.

On Saturday, they finally brought the big guns out and missed two fish before the man himself, Wolfgang hooked the one that matter, at the northern edge of the Canyon. The fish took the Legend´s Enki on the right rigger and went absolutely wild.

As so often happens there, but rarely with big fish, it took them in as opposed to the east and, eventually they had this fish over the sand in 17 meters of water. Beautiful sight and they let her go at #700, Wolfgang´s best fish to date and he had the blisters to prove it 🙂

As the peak of the Black Marlin Season comes to a slow down at Vilankulos and the Bazaruto Archipelago due to exceedingly warm water, further down south at Inhaca / Santa Maria, the peak Blue Marlin season is about to start and will run all the way to May. We will be there in March / April, usually the best time for the bigger fish.

This year we will fish into December and January from Vilankulos and Bazaruto and it will be interesting to see what the conditions will be like as its been many years we fished for Marlin so late into it. When we did so in the older days you never knew what to expect seeing every year differed so much, depending on water temperature and visibility. I remember a year when we were catching them really good and big all the way to mid-January when we stopped fishing. The next year we released a 800 in March and then an estimated 1000 plus at the beginning of May. You just never know…

Hopefully they will be around otherwise will, just chase those Geet´s…either way just great to be out there…