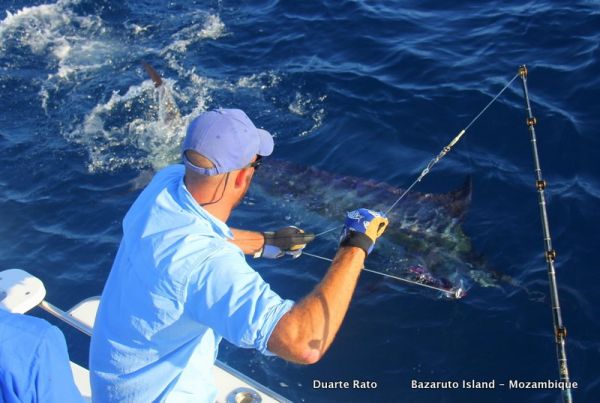 In the last three outings that we went deep out of the Bazaruto Archipelago in July, we raised has many Blue Marlin, which is particularly interesting seeing we are in the peak of winter.

Although no one really fishes for Marlin outside the historic peak season (Sep-Jan), from my experience I have always felt that one can realistic target them until April / May, especially the blues!

After a kind of slow day on Wednesday, where we went north and found some pretty sh!t green water the next day we left Vilankulos at noon on Charles Holsted 38ft SuperCat – Game Changer on a broadbill mission.

It is only the second time I have tried for Broadbill here. The first try on early May 2001 we had two fish, one of them right by the boat that pulled the hooks.

Hamish with a nice dorado caught on the Bahama Lures Phoebe 60 on Wednesday!

At about 2pm we got outside Magaruque and put a spread of lures and started heading deep all the while rigging a good number of big fresh squids.

I had set the autopilot to an area which in some old Portuguese charts showed a huge canyon going from 350 to 550 meters about 9 miles out. It did not show on the plotter chart, which was quiet worrying, but all of a sudden we started marking bait and the ocean just plunged almost 200 meters.

We spent the last hour of sunlight driving around trying to understand the structure and marking where the drops where.

Myself and Morgan with a few Lulas!!!

Well, besides a hammerhead shark it was an uneventful night. I think conditions were not great (no current and greenish water) but more importantly the light sticks we had were leaking and I am sure that smell drifting around the baits is not so lekker!

We will give it another try soon!

Anyway, we woke up and decided put the lures to troll back home but a couple miles south from where we spent the night we started seeing a lot of dolphins, flying fish, small bait on the surface and frigate birds!

We caught a small dorado on one of the lures and decided to stay a wile longer and see if anything come up.
Exactly an hour later I was driving up top when the slick tail fin of a Marlin appeared behind our short corner bait, the all Black Big T – TT.

The fish had a blazing first run and jumped and trashed around like crazy, obviously tiring itself out properly in the process. It went deep and within 20 minutes we had him by the side of the boat.

However he was not yet done and had a few more runs but on the half an hour mark Morgan got the leader.

We got the fish alongside and estimated it at around 400 pounds. Seeing it was Charles first ever Marlin, we took a few photos and send it on his way!

Another hour passed and then again on the same lure on the short corner another Blue shows up, unfortunately with no real intent and after missing the lure it faded.

Obviously we decided to stay a little while longer. The Captain was flowing and we lit up the braii….

Another hour passed and we decided to make our way home, but just then the shotgun lure, a flat BB 1656 in yellowfin colours was taken and a sailfish jumped. We decided to give the fish to the local skipper Ben but unfortunately the fish come off very close to the boat.

Big smile from Charles on his first Marlin holding the lure that did the trick.
The black BIG T Trevor´s Terror!