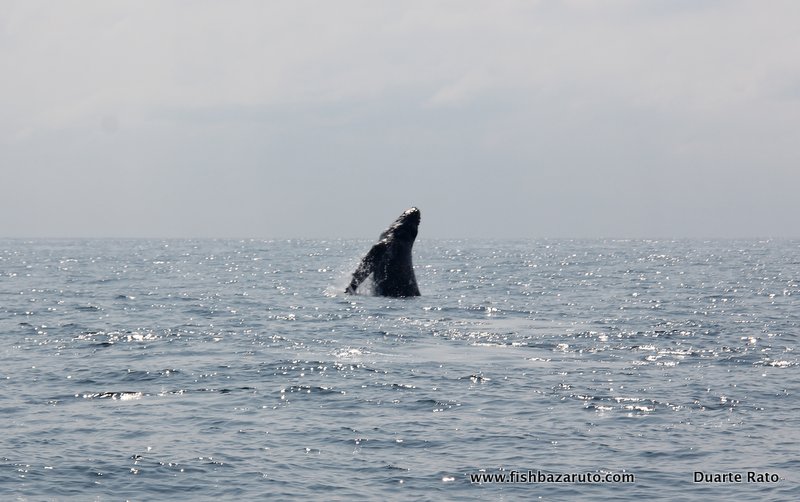 This winter or kind of winter @ bazaruto as been the mildest I can remember, and although it´s not great news for us kite surfer’s, you don´t see me complaining much as fishing always takes top priority and it´s just been awesome out there.

This last week saw the water warming up a tad to the mid 24c and some nice action on some nice YFT up to about 60 pounds, some big wahoo and a few sailfish!

Had a great day with Mike Doventon and the boys on Saturday aboard the Game Changer. I picked them up from Anantara at 6am and we headed out to the top end of V mile reef in flat calm seas for some light tackle fishing

There was a really good bite early morning and we got into some YFT and some big wahoo. We were unlucky with the wahoo as we pulled hooks on two really nice fish and then had an even better one get sharked right by the boat. It was quiet a spectacle as this bull shark took the wahoo and then a free swimming YFT started jumping right there and then and the shark took it as it hit the water!

The boys were a bit depressed tough as they had wrongly put way to little beers on the coolerbox and they were finished by 7am! Well I radioed some boats around us and within minutes we were picking up a drifting life jacket with two 6 packs! That did not last long but I had anticipated and had asked a boat that was coming for a dive at II mile to bring us a case – so before noon we had beers on board again! To say the guys were impressed with the service is an understatement!!!

Everything went down as the sun reached it´s zenith and things went slow so we picked up a small YFT amongst a school of skipjack and live baited it. Within 20 minutes we had a Black Marlin come up on it but unluckily it got bill wrapped on the leader on the strike and never hooked up – but nice to see one so early anyway!

We carried on with the bait and went shallow as the guys wanted to catch a shark – but as Murphy would have mysteriously we had no takers.

Can´t forget to mention the whales, s normal between July to September the humpbacks are everywhere, breaching and tail and fin slapping as they do. Such a remarkable sight for those guests fishing with us!a

It´s really interesting to see how this season pans out with such a mild winter. I mean there, as hardly been any winter and absolutely no wind so far. The water temperature did not go below 24c and for the all winter we been seeing and catching warm water species such as dorado and skipjack..and whenever we put a bait out for Marlin we had fish come and take a peek in very little time!

Can´t wait to bring the guys out and fishing for them.

Not long to go now…