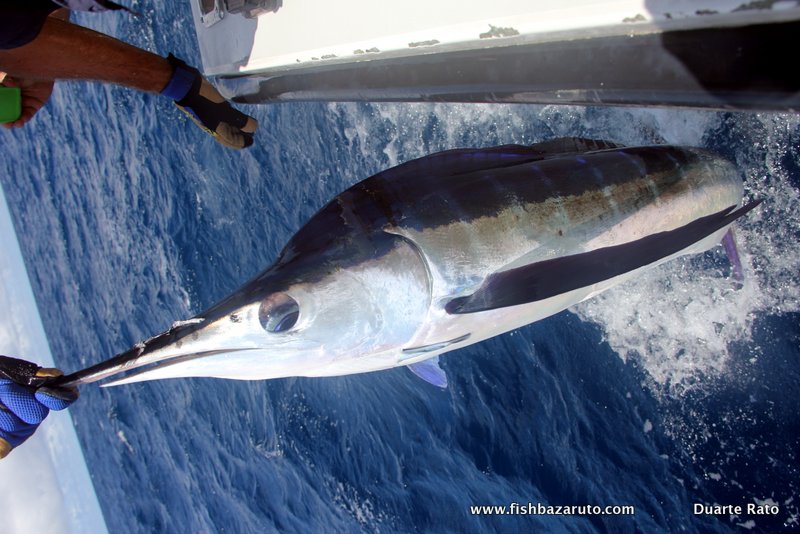 The next day, Michael Wright and David Tucker from the States, arrived at the Rock. It was real good to see them after a year. I knew we were in for a great few days, both in and out the water.

I first met Michael 4 years ago when he come to fish for a week at the start of the Black Marlin season on Bazaruto. We kept in contact and last year he decided to fish the Cape Verde for the second time and asked me if I knew someone who would like to join in for the charter. David had come on the first of his two trips to Bazaruto two years before and as with MW we had connected straight away. I knew he would be the ideal guy to join in and after a few mails we had the trip sorted. I could literally write a book about that week of great fishing and partying we enjoyed last year in CV – but that is another story.

Michael & Dave are not to keen on the popper stuff, they were here for one big fat Blue lady. However, they were keen to sample the great tuna fishing as well. So our drill for their stay would be to troll for tuna in the morning, then fish a few good hours out wide for the Blues and then back again for the tuna in the afternoon.

Fishing the jets and bullet heads, we got them a good number of tuna over the trip. Again, I can´t remember the exact numbers but there were many big fish which we released and lots more that we lost or missed (for some reason those Ascension fish, all of them and not merely the billies, have seriously bad table manners). There were also a lot of the 20 and 40 kg one´s – we even live baited one of them that provided nothing but a good workout for myself and Morgan while holding the elastic bands.

There were some wahoo as well, black jacks, amberjack´s and a good number of sailfish that we failed to hook. We had a few more mysterious bites in the deep that were probably white´s or spearfish that never hooked up. But, David did get one white Marlin, which he swam with on the release. But, at the end we never did get them a big blue lady!

A little help from his friends

Like I mention before, it is not the best time for them here and we had lots of wind for the week which made it difficult to fish out deep, were we saw the few Blues. But, most importantly that green body of water persisted making it for very unfavourable conditions.

In the end we raised 5 Blues, all of them good and, at least one was a slob, probably well north of 800. But they were extremely lazy and when we did get a bite it was a half hearted one. Michael did hook one on the second last day which unluckily come unbuttoned fairly close to the boat, but that was it.

But again we had a great time & vibe in the water and also out of it – great braii´s Ascension Island style, a few good drinks at the Saint´s and any other drinking hole we could find at the rock and generally just (as David would put it) terrorizing the Ascension nights! We made a great team and spent parts of the day already planning next year´s and 2017 trip´s – the boys should be back at Bazaruto to fish with me, we might make it to Cuba on David´s Viking ´Tucker´s Tale, later in the year they might join me in the GRB and there´s already plans for a return trip to CV in 2017!

Senor Carl, Lowtjie, Michael and David, thanks for your remarkable company and enthusiasm – it truly is a pleasure to fish with you all!

Matthias, thanks for the opportunity – you are a true gentleman.

Last but not least, to Divan and Morgan, thanks for the hospitality and good time´s brother´s…