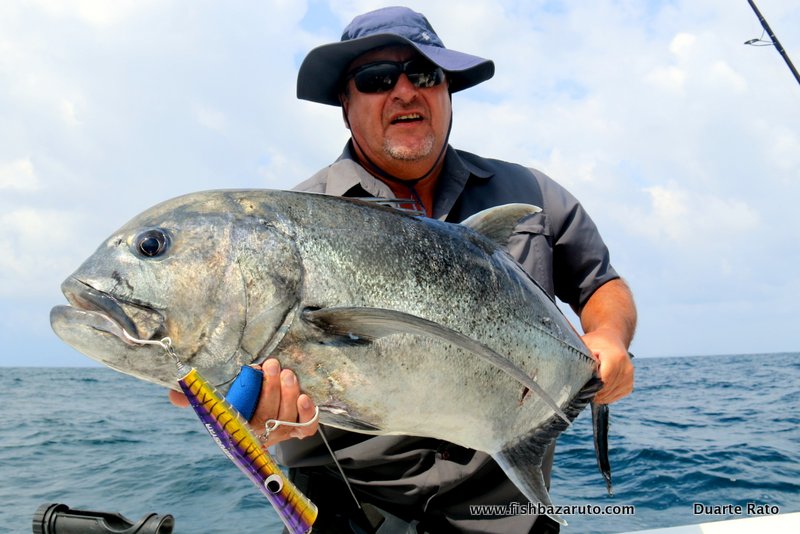 After an unusual long stretch of very warm water (El Nino year?) at the end of March to the beginning of April there was a steep drop and as a result the fishing fired up immediately.

This was particularly true for most of the month although there were some slower periods especially after a big low-pressure system in the second week and then during a big full moon tide right at the end. But, for most of the time everything went wild with some nice tuna up to 70 pounds showing between V mile and Sailfish Bay with some at least two fish looking around a #100 lost by the boat. That week and a half provided some incredible action with multiple and triple strikes being the norm. In shallower and stretching the entire archipelago but especially at V, VI mile and down south at the Nyati pinnacles the cuda (AKA: King Mackerel) fishing was also fast & furious. There were lots of darts around with some crocodiles mixed in…the best we caught an estimated 25 kg on a live jube-jube.

But the best was the surprisingly number of Marlin seen, fought and some released especially during the days before that big low-pressure system moved in. Over a 6-day period the few boats fishing offshore (which were not really targeting them but mostly game fish light tackle) encountered Black Marlin on a daily basis. Morgan on Spanish Fly fishing down south got one on a live bait. The next day Vamizi released a small one at V mile on a #30 pound rig.

Encouraged by what they had seen the guests decided to have the crew put the lures on the big sticks the next (half) day. Within half an hour they raised a good fish about #350 that would not bite and just before lines out at 11 am one estimated at 600+ took the lure but come undone after wind-splashing close to the boat. In the following three half days Vamizi had another three Blacks, one on a ballyhoo rig on the #30 that chaffed the #130 leader after 45 mins, a #300 we missed on the strike and then released a #250 on the #50. But the best fish on this stretch come aboard Watamu. Jayson told me that he was also fishing for game fish but convince the clients to put the heavy gear out. While he was still setting the spread a huge fish inhaled a BB lure – it unfortunately come undone after a while. But, back in early December Jayson was fortunate to be a guest on Big Bob and release a 950-pound – this was the first big fish he had ever caught but he believes this one was a bigger!

Although still early for them there were a fair amount of sailfish around with a few pods showing which translated into double, triple & quadruple strikes. However we all know how finicky they can be and not targeting them specifically with circles provided a poor hookup ratio. But, a few good sailfish where released by everyone and their numbers should improve has the water-cools down.

Otherwise there was the typical popping, light tackle spinning, jigging, drop shooting & fly-fishing that is so popular and produces a vast diversity of fish the archipelago is known for.

However, April´s best day fishing for me was the 20th April, when after so many years I took my Dad fishing! Visiting for 2 months it was such a pleasure to go out with him. It had been almost 15 years since we had last fished together in Mozambique and we did fish a lot (hundreds of days) from when I was a little toddler, to my teen´s and until he left Mozambique. Cool to see him bending on some light tackle!

Along with my Dad were some of the Vilankulos youngster’s who had a ball on the light tackle with some GT´s, bonnies, cuda, greenjob fish, great barracuda and other´s….we also missed a Marlin bite! Coming in late in the day we were greeted with the sight we have been waiting for on the outside of Magaruque…the natal snoek / Queen mackerel where schooling and feeding among the bonnies. This is a great phenomenon that usually only starts by early May and provides some incredible light tackle spinning action. Last year we had the best run in years and in our best session we released 40+ and only stopped as we had run out of spoons!

During the last week of April we had Ian, Neil and Gideon for some serious popper fishing. It was great to have them back and such a pleasure to fish with these hard-core boys who plug the whole day despite the fishing having been sluggish. Make no mistake we had some pretty insane, even World class session in the number and size of the fish that come to the poppers but they would just not commit and it turned out quite a humble and exasperating experience! Difficult to say if it was the full moon, the lack of bait, exceedingly clean water, extremely big tide  – we found them good but they would just not commit.

In one session alone we had 9 fish up in a hour and a half and this where no babies with three of the fish that we saw well and right into the boat looking to be in the 40 kg + class. They would boil, chase the poppers, sometimes unconvincingly hit them but very few hooked up. We did get a few and some other species but it was little reward for the effort the boys put in…that´s fishing I guess!!!

In a couple of other session we also had an unusual number of sharks, mostly blackfin´s but also other´s take the poppers. Not the greatest sport some will say, but it breaks the ice when it´s slow and these nervous sharks give a real exciting account of themselves on the plugging gear – just not so easy to unhook them!

On the last afternoon session and while blowing a stiff SE we got into a few Geet´s and other kingies but from afar we saw a local dhow in distress. As we come closer we saw they had broken their mast and obviously towed them back to Benguerra Island.

Great having the guys here and enjoyed a great month on the water with everyone…just got back from a 2 week trip to tofo with the family & the parents (thus the delay on the report).

In a few weeks we got the sailfish comp and the a few gamefish charters and then some Blue Marlin fishing before and for the 4th July Blue Marlin World Cup. After fishing it in the Azores, Bom Bom, Madeira for a few years and Cape Verde since 2006 it´s exciting to fish it for the first time in my home waters of the Bazaruto Archipelago.