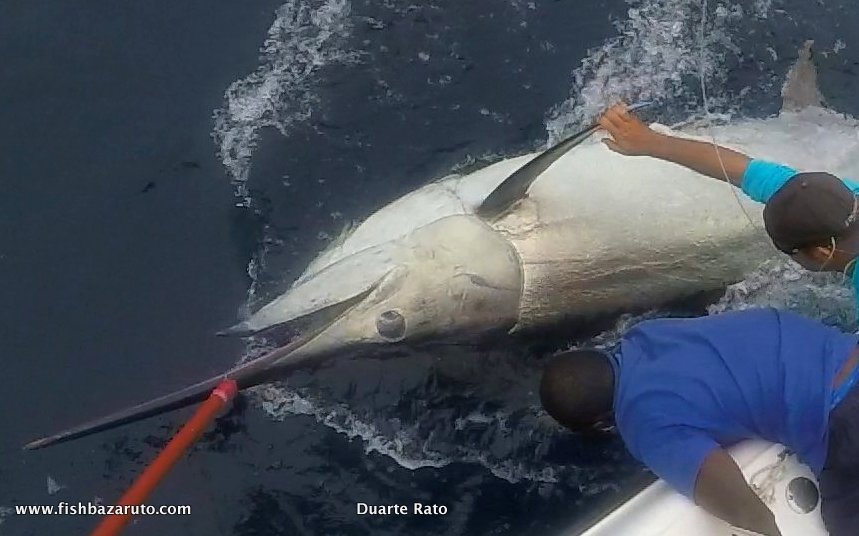 It´s not every day that a first-time angler catches a grander Black Marlin, but, that´s exactly what happen to Andrew Carrick, last Tuesday the 24th of October. June, two years ago, Andrew had fished with us for a couple of days and besides a few wahoo he had briefly hooked a Marlin that spat the hooks on its first jump. That was it but this time he finally got his first Marlin, a grander fish we estimated at well over a 1000 pounds.

We had just finished an amazing charter with Nick Chalk and the other UK blokes that where on their third trip to Bazaruto. Despite not catching a Marlin on their last fishing day they had an amazing trip catching 5 out of 5 Black Marlin in four days including a small one, a 400, a 700 and an 800 pounder.

On the 24th of October, we started with Carl Jankowitz, Andrew Carrick and Rian Chambers.

This was Carl´s second Bazaruto trip for the season as he had been here with the family in late September and managed to release 4 out of 4 Black Marlin in four fishing days.

Actually, anyone who reads this blog or our reports will certainly recognize Carl´s name. He has fished with us aboard VAMIZI for a good 15 years and, in that time as caught or been aboard for 5 fish over a 1000 pounds, two of which died on us and which went 1107 lbs and 1098 lbs.

Rian has also got good experience on big fish having owned a few boats out of Richard´s Bay and being aboard a boat that caught an estimated grander Blue in Bom Bom a few good years back.

So, as we made our way out on the morning of the 24th under a light breezy southeasterly wind Carl told me that the plan was, first & foremost to get Andrew´s first Marlin.

Although I had done so two years previously of course I, once again, went through everything with Andrew, set him up on the chair & harness and gave him an extensive briefing.

My plan was to first fish the northern side of the canyon at the end of the incoming and move into the south side once the outflow pushed in green water to the northern edge. Although we had a fairly rough ride straight into it we run all the way there to get the end of the tide. The previous day there had been bait (yellowfin & skipjack) all over the area early morning, so,  it was disappointing to see little to almost no activity as we set the lures out at 6h30. We started at the top end of what we call Big C and worked south to the northern edge of the canyon. Once there and the canyon went down deep we turned and tacked straight west to worked the edge all the way down. Has it started to come up we turned southeast again and at 6h50, exactly 20 minutes after setting them out a big bomb exploded on the long-left Island Express. Sinfully only Lourenco saw the bite as Carl and Rian where getting their spinning outfits ready (to catch live bait) on the bow, I was speaking to them looking aft and Alex was inside getting them some leader!

Anyway, turned to see a big tube of blue water followed by a very fast first run that, once we had settled Andrew in the chair and turned, had peeled us way into the backing. Only then and as I followed the dacron to recover line did she jump, right ahead of the boat. We all saw she was a big girl and my first reaction was 800 plus. But, after she jumped again, this time away from us giving us a perfect view of her broadness I was pretty certain she was right up there, and I told Carl so…

She went on another sprint and we lost a lot of what we had recovered and then finally settled deep. Meanwhile, Andrew was having some serious trouble coping in the chair. It´s not easy for anyone to understand all the mechanics that involves rightly pulling on a fish when you have literally never used the chair before. Although we had been shouting instructions, once we got on the top shot with the fish settled and swimming deep into the SE, we calmly gave him some pointers, he relaxed and from then started pulling and putting some good pressure on the fish.

There was a good bite around us while we were fighting. We were lucky to have found the big girl amongst a good number of small fish seen in less than an hour and a half. Big Bob come from north and as they worked around us hooked up and released one about 200 pounds on a bait. Then Sailfish also hooked one about the same size on a live bait but lost it. Meanwhile, our second boat IBO, had 3 bites from small fish within an hour but none of them stuck.

From looking absolutely desperate at the initial stages, Andrew performed like a champion from then on and put immense pressure on the fish, as we had by now almost sunset it. He was sweating buckets and at times even come close to chunda….but he did brilliantly.

At the 45-minute mark, she gave us another couple jumps and the next 20 minutes we had her right on top but as we got close she bolted down. The last 20 minutes of the fight where a difficult tug of war where we inched her up slowly.

Finally, just after 1h40 after hookup we got the leader and Alex did an awesome job to bring her up to the surface. Despite being tired she was still digging her head down and he was there for a good while taking back breaking, short wrap´s to bring her to the surface. Finally, she broke the surface and Lourenco put the snooter on her bill. Brilliant job…

Now, while we were fighting the fish Carl got on my camera and took some great jumping shoots as the fish had cleared all out the water a few times. Then, with the fish by the boat and just in gear I went up top to some great shots from where I know we can get a great angle, showing her massive size. But, after we finally released and sent her on her way, I went back to see the pics and was dumbstruck when I saw NO CARD IN CAMERA on the screen. The previous night I had taken the card out to download the pics for the UK boys and had never put it back. Why, with all the technology on such a beautiful and expensive camera CANON does not have a warning when you actually taking the shoots is beyond me!

At least and luckily, we had the gopro footage taken by Rian and even though we all know the quality and wide angle of it is low res and does not do justice I was able to take some screen shots of it. Once we get some time will edit all that footage and post a good clip of it…

But certainly, the experience is imprinted on everyone´s memory forever and certainly Andrew who come to Bazaruto to catch his first Marlin and walked away with a fish estimated at well over a 1000 pounds…

2019 Bookings are now being taken, click here for more information on how to get fishing with FishBazaruto.