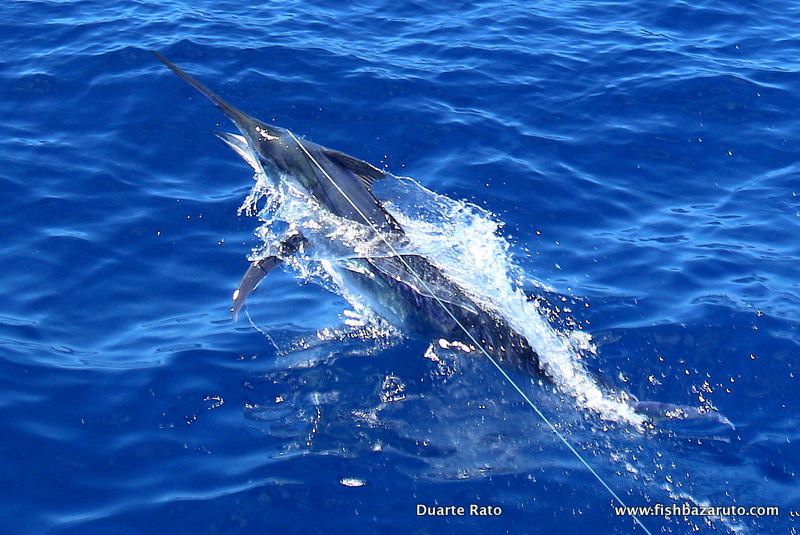 Our last three Vilankulos fishing days where nothing short of awesome and a great way to introduce both Pablo from Uruguay and Nicolai from France to the Bazaruto Magic as well as a good way to finish off before heading off to Cape Verde until July.

Carla Papone had emailed me a few months ago and booked a couple of fishing days and Island trips aboard Drop Your Rods, one of the 38ft Supercat´s from Vila Do Paraiso that we use when based out of Vilankulos. With a 16ft beam this awesome and superbly stable Sportfisher provides a very comfortable fishing platform for easily up to 6 anglers and the versatility to enjoy the most the Archipelago as to offer during this time of the year.

I met Carla and her husband Pablo along with all the family on the previous afternoon and we all agreed to fish for the next two days as the forecast predicted flat calm conditions and then do the Island hopping, snorkeling the days after.

Pablo turned out to be a great guy, experienced with lots of fishing done on both, the Atlantic and Pacific side of South and Central America who had fished with a lot of well know Captains, including a few friends of mine. He was a real pleasure to have on board and Carla joined him on our first day out.

We headed north and it was pretty hard going in the morning as we tried to catch live baits and a few game fish. Eventually we found them south of Sailfish Bay but live baiting proved to be pretty frustrating has all the small Yellowfin and skipjack baits we got where sharked within 10 to 20 minutes. At about 10am I decided set the lures and head out deep to an area we call Blue straight out of Sailfish Bay. As we got to about 2 miles NW of the spot in about 420 meters we started seeing a lot of activity in the distance, with showers of small flying fish being chased out the water. We got closer and within the area with found two huge logs which had zillions of small dorado´s around them, along with small tropical yellowtail and tripletail. We worked the lures around the logs which where way too big for the size dorado we were seeing. However, we did get a real nice Bull on the Pulsator Marlin Magnet. We worked the area for another hour and it looked real nice with constant chases around us with tuna feeding on these small flying fish. Although I was extremely confident we would raise a Blue in between all the activity we never even raised one and had to contend ourselves with a few YFT.

Maybe we should have persisted but decided to come back in shallow to work the afternoon between VI and II mile. We made a nice barbecue on the way in with grilled calamari, salad and of course some very fresh dorado steaks! As we got to the top end of VI mile it started to look way more active than in the morning with a good number of bait schools showing on the surface. We picked a number of YFT and skipjack and again decided to live bait a couple but the sharks would not leave them alone. We were pulling the lures but had a couple bait rods in short and at a stage hooked two skipjacks. I put the boat in gear and started coming down the bridge to help and rig the live baits when half way down the long left gets taken and a nice Black starts jumping! I run up the bridge gun the engines but it was too late! Despite not getting a Marlin it was a great day and ended up with a bunch of nice game fish.

The second day Vilankulos fishing day was pretty rad and we went 2 for 3 with a Blue and a Black Marlin release out on the Bazaruto Archipelago.

We found much better water and loads of skipjack down at the top end of the canyon all the way from 40 to 180 meters of water. It looked superb and was twenty minutes into it we had a blind strike on the long right that never connected. After working the lures around all the action for over an hour we decided to put the bait rods out and catch a lively. Normally this area and especially at the depth we were working (over 150 m) there is no worries with sharks, but that was not the case and after our second skipjack got chowed we reverted back to lures.

With high tide and great blue water pushing in I went right into the canyon north drop but nothing much happen. Just after 10am I started going out wide and twenty minutes into it we had a #200 Blue crash bite the long right express but not finding steel and 30 seconds later jump on the Ahi Pussy on the long left. After a series of jumps it also pulled.

Two hours later we had a phenomenal bite on the long right again and this time we hooked up. Pablo got set up on the stand-up gear and made short work of the #350 pound fish which we released in less than 20 minutes. We also got a couple of tuna out there and at 13h30 decided to move I shallow, again enjoying a meat and fish barbecue on the way. There was plenty of action on wahoo and tuna at Best Reef and after some good fun there we again tried baiting a YFT but again the man in the grey suit was not far behind.

Close to 3pm I started making our way home tacking along the canyons southern edge. Literally minutes before going in a very aggressive fish shows on the right left Pulsator Marlin Magnet, hook´s up and Pablo released his second Marlin for the day. This time a black to end the trip on a real high note!

A few days later we took out Nicolai from France for a one day charter aboard the 38ft Game Changer for his first ever Vilakulos fishing outing. We started the day on the southern side of the canyon which was wild with loads of skipjack schools once again with Yellowfin tuna mixed into a few of those schools. Every time we found them it was wild and we had some light tackle fun including a few doubles, triples and even a quintuple hook up on them. Nicolai has said he would like to target BIG FISH, I had explained that meant Marlin but knowing he would be happy to tussle with a shark we live baited a small YFT and I decided to put a wire trace. Well that did not take long and within 5 minutes it got taken and we hooked up right in the middle of a tuna school. Nicolai got strapped on the #50 stand up tackle, put on the heat and made little work of the bugger!

Time to get serious and at 9h30 we set up the lures and started heading out. Ten minutes into it we picked a nice wahoo on the Ahi Pussy. Set the spread again and not fifteen minutes had elapsed when I see a big boil on the long right as I am making my way up the bridge. The #250 Blue come back again on the same lure and this time it started peeling line seriously, jumping in a big wide semi-circle. As we cleared and turn the fish starts a second series of jumps and comes undone. Arhhhhhhhhh!!! We work the area for a while and later decide to head out deeper to where we had found the fish for Pablo a few days before. But, unlike that day it looked pretty desolate and apart from some frigate birds there was few showing on the sounder and non-on the surface and absolutely no rip lines. At lunch time, and after some YFT sashimi, we decided to start up the barbecue, this time with some grilled chicken, T-bones and lamb chops and head in shallow.

I was heading towards the northern side of the canyon to work that area which has frequently been so productive for us at the end of the incoming tide. Half way I had a hunch and decided to go pass the area further south where we had the first bite in the morning. Amazingly, as we were no more than a quarter mile from the mark a fish jumps exactly on the same lure. But not the same fish, this one looked well in excess of 500 pounds but after coming half body out the water and starting to window screen it through the hooks. ISHHHHHHHH!!!!

We worked the area and then moved to the north end of the canyon for the last hour of the afternoon but had no more action on what was despite frustrating, a pretty eventful date.

It seemed everyone fishing experienced the same rubber hook syndrome with my boys fishing north also going 0 for 2 on Blacks and another boat, light tackle fishing, missing a couple of sailfish strikes.

It really is looking awesome out there with inky blue water with perfect temperatures breaking between 27.5c and 26.5c and just an amazing amount of bait, especially skipjack and football size Yellowfin.

Well been pretty good and it would be hard to leave if not flying to Cape Verde early next week (with a few days in Lisbon on the way just for good measure).

So yeah, next reports will be from there…