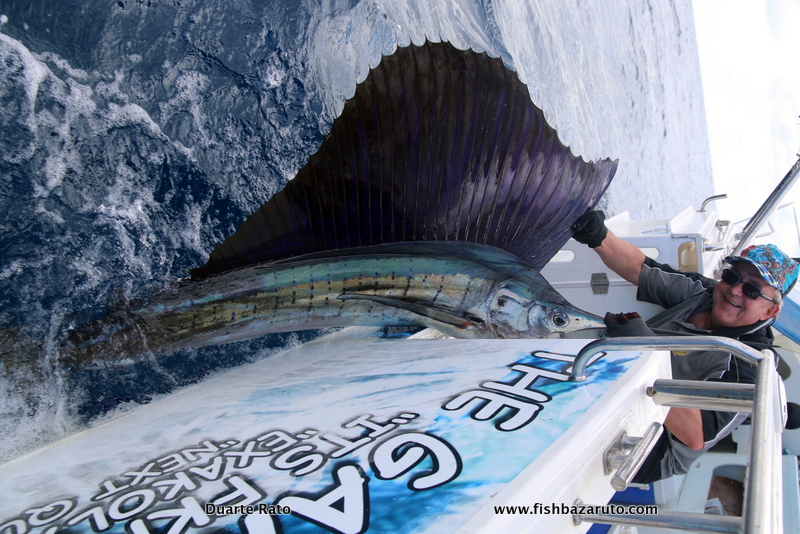 Bazaruto Sailfish for the Naude brothers

On the 14th May we had the first day off the water for a long time and welcomed the Naude brothers for 3 ½ days of fishing and they ended catching a Bazaruto Sailfish each plus lots of big wahoo and a few more gamefish.

We first met Francois Naude and his wife Agnes during the Marlin Season in October last year when we based at Anantara Bazaruto Island Resort & Spa on Bazaruto Island. Unfortunately, when he tried to book I was already full so he fished with our second boat IBO with Alberto but where unfortunate to go 0 for 4 on the day. But, he was close to us when we released a 1 100-pound Black that day and at the Resort when we come back with a tail wrapped 814 lbs a couple days later. Think he got impressed with the fisheries and asked book straight for the late October 2019, seeing all our season was already booked already for this year.

However, even knowing it was not peak Season for Marlin and seeing he was coming from Australia to Africa on a safari trip to Tanzania he called me up and asked if I had availability in for a few days in May. He invited his brother Joel and wife Benita, to come along.

We had a great time together, awesome people and Gretha, the kids and myself joined them for some memorable evenings and delightful dinner´s.

Although with the big spring tide the fast wahoo action we have been experiencing slowed down we still managed to get a good number of nice size speedster’s along with some other gamefish and hooked four to release 2 out of six raised sailfish.

The first day started with a bang and we had a sailfish 5 minutes after setting the lines. The fish knocked the long right and then went on to the shotgun. I dropped for a few seconds, it started jumping but pulled the hooks. Really disappointing and that pretty much resumed the day with a lot of missed fish afterwards.

After that were again unlucky to miss a good fish on a jube jube live bait and then a few wahoo. We did get a cuda and a small kingfish which we released. We then left the pinnacles and went deeper to find target wahoo and we got a few good one´s although, again, we did miss way too many fish and had a few cut´s on the leaders from other fish following hooked fish. We raised a sailfish and then missed one right at the end of the day.

The second day Francois went out on his own and despite the stiff SE (first bad weather day in over a month) we managed to get some good fish despite the difficult conditions. As has been the case the morning was slow but as soon as the tide changed the action was wild and fast with some really good wahoo, a nice YFT and to top it off a Bazaruto Sailfish release.

Everyone come on our third day and we left Vilankulos at 8am and went to have a walk and swim on Benguerra Island, followed by a snorkeling at II-mile reef. It was sunny and flat calm so in the afternoon we decided to run down to the canyon and have a go at it. Well, they certainly where on the bite and several multiple and triple strikes later we managed to get 5 big wahoo out of 9 bites.

The last day started with a fast but turned out to be the slowest. Five minutes after lines in we hooked up on two big wahoo and got one. About 15 minutes later Agnes hooked up on what turned out to be a sailfish, unfortunately after we cleared and after the fish had done all the jumping the hooks pulled and we come undone. Then it was time for Francois to tussle with a nice YFT.

After that it went real quiet so I decided to go into the pinnacles to get small jube jube live bait which was no problem. However, when that bait was not taken after an hour and a half things really looked for the worse seeing I don´t really remember having a live jube jube in the water for so long and not get taken.

We decided to take it out put our wahoo spread and work the deeper ledges where we been catching them daily in good dosages for over three weeks now. Not even a bite for the next two hours, the fish where definitely on a NO day!

In my mind, there was only one thing to do, move in to shallower water and try to save the day with a sailfish. We worked south between 30 and 40 meters and as it happens just on the inside of a pinnacle south of Marlin pinnacles we hooked up and Joel released his first ever billfish, a Bazaruto Sailfish…again on the green & yellow Black Hole / Ballyhoo combination that has been deadly last few weeks.

Just before that Gareth on McFearless had hooked two out of a double strike (and had another one raised) and released them both (pics below courtesy of Gareth Simms) . A few days later Drop Your Rods also released two sailfish in a morning out of 5 raised fish.

That was pretty much it and despite the difficult weather and fishing conditions it turned out to be a good four days with some fast action in between a lot of waiting…but on that boat and with the delicious barbecues prepared by Ben and Gildo no one seems to mind the waiting.

It was great seeing you again Francois & Agnes, and a pleasure to meet Joel and Benita, thanks for making the trek here and looking forward to seeing and fishing with you again in October 2019.

A couple days later we had Pedro Fonseca and his normal mates coming from Maputo for 1 ½ fishing days. For a change, we had a low-pressure system and amazingly this was the first couple of windy days we had for over a month. The first day was choppy and messy and the wind constantly switched from the S to the NE and we had some pretty heavy rain to contend with. The second morning was much better with a light NE breeze. Despite it being slow given the condition we managed to get some good fish including some nice wahoo, a good size YFT and a couple cuda and hooked one out of a double sailfish strike but where unfortunate to pull the hooks.

Then the next day we caught one out of a triple sailfish strike plus a couple wahoo in what has been the normal, flat calm beautiful weather.

Yesterday, the 25th of May we had Frank Rodriguez from the famous 90ft Viking the Fa-La-Me fishing with us and despite being very unlucky we had a great day with flat calm beautiful conditions and really great people. We released Frank´s first ever Indian Ocean Sailfish out of a double hookup, raised another 2 that did not switch and missed one right at the end on one of the long´s. We also pulled the hooks on a very feisty and acrobatic 150-pound Black and caught 4 nice wahoo, a dorado & a skipjack.

Ohhhhh and the prawns, dorado and rum steak barbecue on the boat was not too shabby as well….