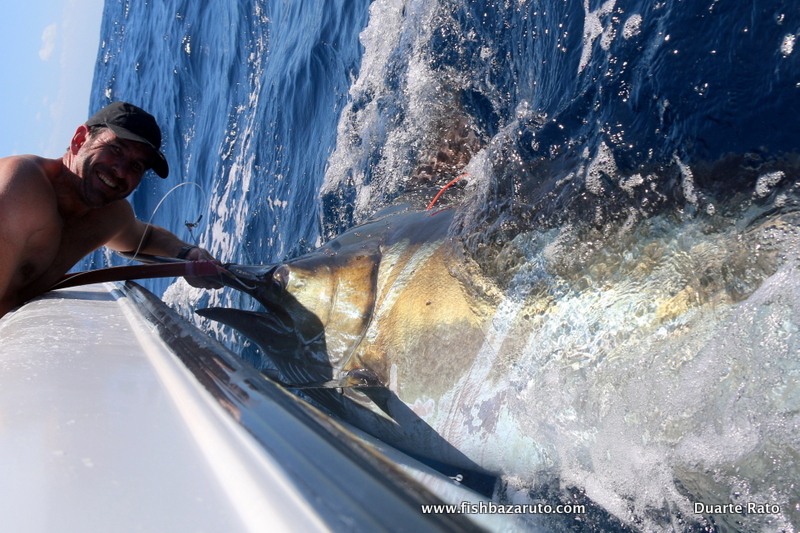 It´s been slow fishing indeed for a few days and overall, it’s been a difficult season thus far. However we really pulled the cat out of the hat on the last day of our three-day charter with Wolfgang and the boys to finish it off in grand style.

There was a truly massive low pressure system that hit southern Africa´s east coast on the third week of October. For three days, the wind blew extremely strong from the SE and all we could do was light tackle and popper fishing on the inside. By the 24th October we were truly land sick and dying to get fishing out there.

Wolfgang Neff from WHBO booked us for three days during this time. Eagerly we got out there to find the blow had not made the changes we had hoped for, actually the opposite. The swell was huge. The current had all but gone. Bait and gamefish where nowhere to be seen (which is rare in bazaruto). Worst of all, despite being electric blue, the water temperature had dropped by almost 2c degrees. I actually thought my gauge was faulty. 23.7c – never in 18 years had I seen such cold water in October, not even remotely.

But at least we were fishing!

The next two days where hard. Extremely slow fishing by Bazaruto standards. A few small Marlin and sailfish raised with some very lazy bites. Alex got a small 150 pounder on Boa Vida for Ian & Brian last day. We got a couple dorado and that was that. It was hard going and the guys where despondent as we left on the morning of the 27th. Their last fishing day.

With an easterly blowing and outgoing tide, going out the cut in the morning was interesting and very wet.

Running was not an option so decided to put the lines in shallow and just slowly make it out there. I had second thoughts and it run through my mind to just go and fish north with the swell. I decided to stick with the plan.

Finally, after banging against it for 20 minutes I finally had a good tack to work south to sharkville.

160 meters of water. It was a mess out there. Shortly after the turn. MARLINNNNNN screams Lourenco. Long left. No one saw a thing, don´t think anyone on the boat took much believe. We carry on for 30 seconds. BAMMMMM of goes the short right Pulsator Bonito Smoker. Get in the chair and start clearing. A small 200-pound model jumps. Will take anything that is given to us at this stage. As we turn to starboard to chase it comes off.

That was pretty much all the action we had for the first 3 hours. Just after 9h30 we pick up a skipjack. The first nice live bait for two days of fishing. Put it out and despite it being tired and swimming sideways we persist. Not long to go and BANG. Blind strike, come up on the drag, load up and a surface run. Not fast but also not shark style. We turn and chase. The fish goes deep. All of a sudden it comes up and starts grey hounding from across the water almost cutting me off. Hard turn to port, full ahead and we just made it. really almost had me there. The excitement on the boat is palpable. Another 8 minutes or so of chasing and turning and we let a 400 pound go. First Marlin for Chris Roberg.

We set the lures and worked the area. Have a few turns south to Big C area.

After the first two slow days, the boy’s beer intake on the boat reaches new levels. The music is blasting and the boys scream to each other to have a chat. Its chaotic but all in good spirits.

Turn back to the area we caught the fish to work the turn of the low tide. Just before 1pm it goes off…

First, we have a 350 inhale the short corner Pulsator Wriggler and scream off at warp speed before coming undone.

Ten minutes later we have a knock on the short left. All eyes are on our wake. We treated to one hell of an insane bite. This thing comes shoulders out the water and crashes the long left from the inside out. Before the clip opens I just know have hooked up. Wolfgang jumps in the chair. His first ever Marlin. Does not help he has had a fair amount of 2M´s. All the setting up and explanations are out the door. Adrenalin as taken over his mind. He wants to wind when he comes up and nothing looks right. Just have to make sure we keep a tight line until he regains himself. A few harsh words, screams actually. Finally, we start fighting this thing. Some great jumps and real stubborn fish at the end. We get her by the boat, place the tag, take a couple shoots and let her go. An easy 450 bordering on 500!

While we at it, right close to us Christiaan on IBO hooks up to a 300 on a live bait but it unfortunately pulls. Probably just wrapped. Aphrodite lets a small one go, a tad south of us.

We set them up and literally are not even done on the festivities when the long right Ruckus goes off. This time Tinie jumps in the chair. His all for it and looks great. Does a great job. Prodigious jumps from the outset. We make little work and get the 300 pounder for a release.

Now let me tell you!

The beers where flowing and so was the G&T´s on the way back. Great bunch of guys and great way to finish off a charter that started with some slow fishing and ended up with a blast of a day for first time Marlin anglers going 3 for 5 on a 450+, a 400 and a 300 Black Marlin.

Just hope this is the beginning of good things to come…

One thought on “Slow fishing ends in 3 for 5 day!”