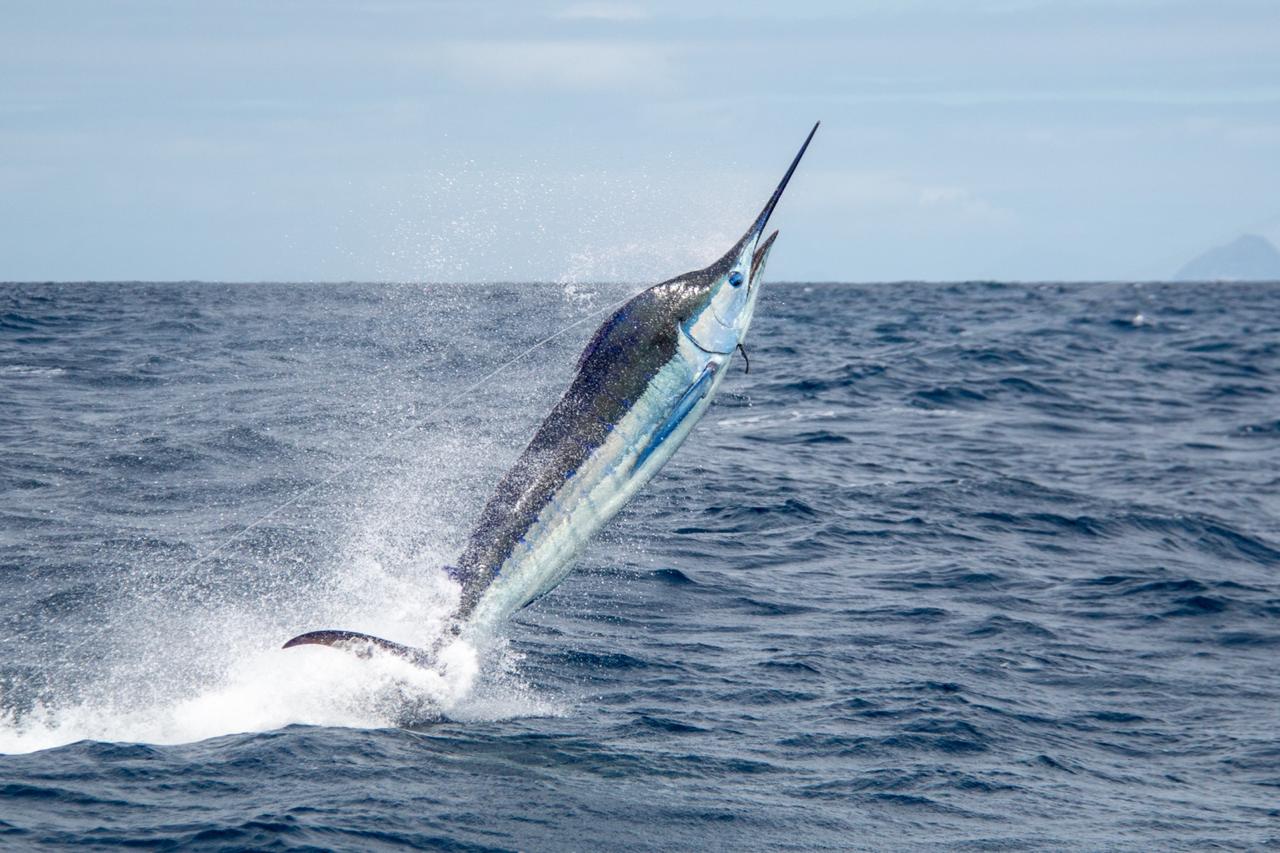 Besides a deep reflection on the state of the World, being bombarded by Corona news (thank God, we have no TV at home), home schooling and thoughtful thinking on how to make any kind of income in the months to come, one still has got to find things to do while in Marlin quarantine….

So, here´s a brief report of March 2020, a month where the World has gone into a turmoil none of us, could, in our wildest dreams, imagine.

It’s amazing what can happen in a few weeks.

Only a few weeks ago we had our friends, Doug and Ryan, come from the UK to spend a week Blue Marlin fishing out of Santa Maria, Mozambique. After a great start to the area´s long season, unprecedented warm water, into the 30c, moved in January and February. Everything went lethargic and even out wide there was a tint of green to it. Despite conditions being sort of back to normal by the beginning of March, we guess the main body of fish had moved on and the World Class fishing this area normally provides was just not there. It was not too bad but not what it got us used to. But, we did have a great time and absolutely brilliant weather. In 5 offshore fishing days, we raised 9, with 8 bites, 5 hookups’ and 3 Blue Marlin releases up to #500 pounds. We also got some dorado and small trevally´s while shore spinning on ultra-light tackle.

While back in Maputo sorting out logistics for the next charter, there was a game fish tournament of Guinjata (roughly 220 miles north of Santa Maria and 120 miles south of Bazaruto) where boats found a good Marlin bite, especially on blues. There were more boats in the event but, only 11 target Marlin, and they released 25 fish to #550 pounds out of 54 hookups´s…strange stats, if they right!

But it’s interesting to see this area, previously predominantly known for its excellent game fishing and jigging opportunities, recently becoming a Marlin hotspot as more boats target them. You might remember that this was the area where the crew on Little Hooker caught a 988-pound Blue Marlin late last December.

Our good friend, Mike Gooch, finally arrived on Saturday, the 14th of March. We had some pretty shitty weather predicted for the week with a front moving in on Monday. After a peri-peri prego steak and a few cold one´s at Clube Naval we made our way to Santa Maria.

Mike brought me some jewels from David and Chad from Big T Lures.

Amazing people with great products who have supported us for years….a big thank you guys!

They sent me a really well built Dredge, probably the best I have seen…hope to put it to use ASAP.

They have also sent me numerous of their lures over the years and we have caught many fish on the Vuta, the TT and especially the Zulu Impy, which adorned our short corner for many years. We had seasons in Madeira where this lure alone counted for 70% of the area´s mammoth Marlin …. it’s a machine!

One of their lures which I have not run before is the infamous Leopard, probably their most known overseas lure. While discussing details on the dredge Chad asked me to use their new concept and build myself two Leopards…

Now, the guys at Big T have come up with this truly amazing idea where you can build your own lures through their website.

You go through every single process of building the lure to your specifications;

Head shape, color and pattern as well as skirt type, color, patterns and extras for your top and under skirt.

Give it a go on the link below, really amazing concept and many proven heads to choose from…

As forecasted Sunday dawned beautifully and with flat calm weather the all day we had an early start to make the most of it, seeing we would certainly not fish Monday and Tuesday.

We set them up in about 200 meters of water and set course to the area we call “quintal“ straight of Hell´s gate. Ten minutes into it, we still putting sun cream and what have you when, BANNNG!!!!!

A bomb explodes on the short corner pulsator Riggler!

Immediately after the bite a 500+ pound looking fish jumps totally out of the water right there behind the transom.

What a beautiful sight with the sun right on it.

Unfortunately, it come undone a couple of seconds after it hit the water.

We worked the area and minutes later had a knock down on the long left but nothing much of it.

At 9am and about 100 meters deeper in 390m, we have a lazy fish looking around #300 come on the short-left Phoebe and follow it for ages. Eventually it gives a lazy slash and fades off.

That was it for the day, or so we thought!

We trolled all the way back to Baixo de Santa Maria and in 40 meters inside the reef, in green water and while pulling the lines in, a sailfish takes the long right pulsator Magnet and we bring the fish for a release and for a perfect end to the day.

The front did move in that night and we spent the next couple days drinking, eating and playing pool.

Had an interesting, Black Label fuel up, bird watching trip on the rubber duck to the Inhaca saco and did some light tackle spinning off the point getting some greenspot trevally´s, some barracudas and a small GT.

We finally got out there on Wednesday but with a big SE swell, a stiff ENE blowing and green water, conditions could not look worst. We went 16 miles to the north, to the other known area, where we found slightly better looking water, but it was real quiet.

By this time things in SA where escalating and there were talks of closing the border, so Mike did the most sensible thing and, flew home early and thus commenced our Marlin Quarantine.

Although very few boats out, the fishing is still kind of slow down at Santa and the weather has been very uncertain, untypical for this time of year when calm seas and sunny skies are the norm.

However, last week Tornado got a nice Blue they put at 550 pounds.

Reports from around the World

Otherwise not much going on, marinas and ports closed in most parts of the world, and obvious not much travelling and thus charters canceled pretty much all over and thus the Marlin quarantine, or should we say lockdown!

However, there was a few good catches and reports from elsewhere round the World in March;

Fairly close to us there was some good some good Marlin in Sodwana including a 700 pounder for Aphrodite.

Hawaii seeing some good fishing and at least three Blues reported over #500, with the biggest we heard going #750 aboard the Hustler and a #707 on the Wild Hooker.

Kenya has been having a phenomenal season thus far with some bigger than average fish from what we heard. The best a 720 Blue aboard the Albatross.

In CV, the Nha Cratcheu and Blue Hunter had a good start with fish up to 500 and 550 respectively and, the Hebe went 7 for 7 and raising 4 other on their first week.

And, March did bring us the first and second grander of the year…

The second a fish around 1 100 pounds in French Polynesia just this last week.

To all of you and your families we wish the best, stay safe, stay healthy and stay at home.

Leave you with a couple beautiful pictures of this water sprouts we had a few days ago on a stormy dawn at Bazaruto….