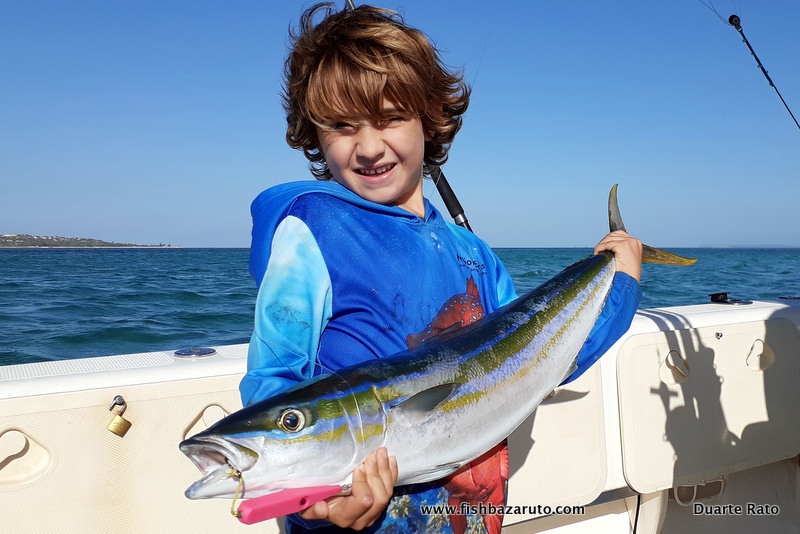 Mozambique sportfishing is back on!

Yeah, that´s right, finally, after a ridiculous couple of months we could not go to sea we now allowed to get out there….Mozambique Sportfishing is back on!

Not that we stopped fishing altogether and, over the last few months we did a number of trips up and down the coast, mostly to BD, Pomene and Zavora to, at least wet a line from the shore.

As reported earlier on the link below, Pomene, where we did a number of trips and spent a considerable amount of time, was epic in more sense than one. We caught many species from the shore, mostly notably loads of bonefish and some really nice Stumpnose, which are just unbelievable fish to eat.

At BD, we did get out to sea on a local dhow and had Duarte release his first Marlin and loads of fun with king mackerel, bonito and some other gamefish as well as releasing a lot of small great barracudas for the boys on the ultra-light spinning gear.

On a recent trip to Zavora we had a great time spinning of the rocks and when the tide was right it was throw for throw. Insane action on garfish and many small trevally´s. And, little Duarte even managed to add a couple of Shad to his species list.

But, as much fun as that was we were itching to get back on the Ocean and when authorities finally open Mozambique for Sport fishing once again in early August…it did not take us long to get out there.

We would have loved to go and chase some Sailfish and the juvenile Black Marlin that start showing at this time…but our priority has been, well, first to get some kind of sanity back into our system, some salt water on our face and of course, get some fish for the freezer, friends, staff, etc

And, as is usual this time of year the game fish are thick out there and paying ball.

Although their peak run in numbers, is normally between May to July, from now to early October is when you normally get the really big wahoo. And they out there in force with some pretty good specimens providing the normal speedster chaos that they do.

As usual this time of year, School Yellowfin are out there in gale force and the sushi, sashimi and carpaccio as just been a blessing.

Then, there´s been some dorado, king mackerel, rainbow runner, skipjack, bonnies, trevally´s and a kaleidoscope of other species to make odds and ends.

Albeit still on the cold side, the water color has been absolutely amazing and the number of humpback Whales is, once again as usual this time of year, just staggering.

And, enough of talking bait now (ha ha ha ha Duarte – Xona)…..as we are now approaching the time of year everyone waits for…

Of course, with travelling restrictions, we are still in the limb if any of our guests will be able to make it here.

We certainly hope so, and we are now offering huge discount package rates for Mozambicans and residents (as well as regional if those flights do open up) to make sure we get some anglers for the upcoming Marlin Season.