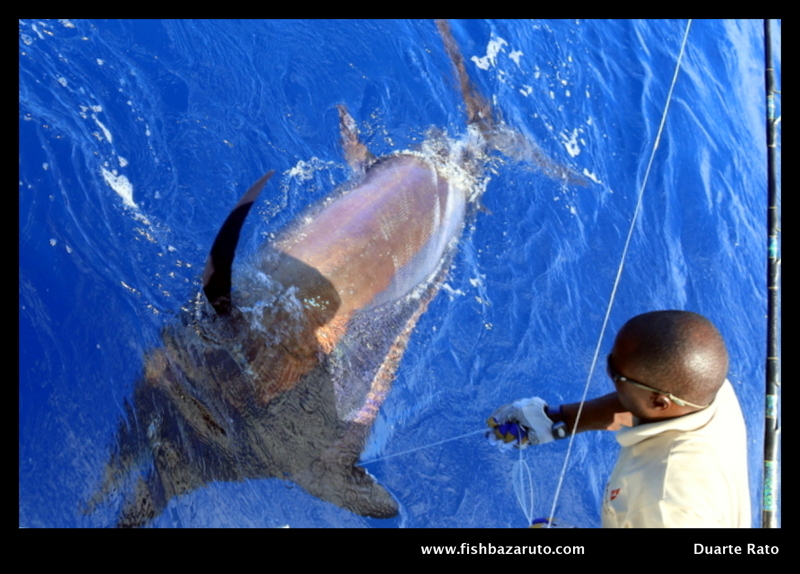 After a short break in November, we had Carl Jankowitz fly in, on the first available commercial flight from SA to Vilankulos since the pandemic started. It was brilliant to have in back and to get out to sea once again.

On our first day, the 11th, and after a morning bait fishing session we worked the dead baits around Sailfish for the all day. Despite the water looking good there it was pretty sterile. Big Bob caught a little one on a cuda skip-bait very close to us late morning but there was not much else to report.

Our usual Honeypot between V and II-mile reef, which we named and has now known as Giants, had been pretty slow this season. But, despite Kevin telling me that they had worked it with no success for the last few afternoon´s, at around 2pm I decided to put the lures and work back south.

As soon as we got to VI Mile we finally saw some bird activity. We picked up a few Yellowfin tuna, baited one that was sharked and saw more bird activity to the south of us. It looked really good, with birds working on the YFT to the outside and bonnies to the inside. Water looked good, there was bait and surface activity and the tide was about to change.

The inevitable had to happen and just before 3h30pm we get a bite on the short corner Pulsator Riggler and come tight.

Carl made short work of the little guy and after releasing it we headed home, enjoying a divine Malt senor Carl had brought along for these occasions.

Always good to get one on the first day.

After a blowout on the 12th we had a late, but insane start, the next day.

We set the lures in 45 meters at around 9am and a few minutes later, when we got to 68 meters of VI mile there goes our long left!

This was a much better fish which gave us a great aerial show by the boat. So much so that on one of those crazy jumps she got tail wrapped. Carl put on the heat and we got her alongside for a nice release.

Nice to get a #500 within half an hour if starting fishing.

But, not all was pretty and from now on it was seriously hard work as we had to deal with some very difficult and adverse conditions.

First from that day and for the next four we had easterly winds and we all know what that means.

The sea went sterile and as usual nothing was eating.

Worst of all there was absolutely no current and then we actually started to have a slight counter current pushing from the north.

So, for the next couple days we caught some wahoo, rainbow runners, Yellowfin tuna and many bonnies but on the Marlin side we raised three or four, had a couple lazy bites but not much else. We also had a couple sailfish messing around with the swim baits!

We did have fun every morning with some chaotic action shallow of VI-mile reef. Every morning we got there it was mayhem with bonnies and some days YFT. They would not take a rappie or feather, which was actually for the better as it was much more fun catching them on the spoon and GT ice creams on the light spinning tackle.

On the 15th it also come alive deep of Sailfish and while trolling the dead baits Carl had some good fun on the bow, throwing some spoons and Ice creams to some good size YFT and catching a bunch.

We took a day off to go and do the Covid test and along with Carl, Louise and Christopher enjoyed superb lunch at Azura´s Piri-Piri restaurant.

By now there were more boats fishing. But, us and Big Bob up north and Strenue and Veleiro down south where still struggling.

However, on their last day Strenue did release a 250-pound Black and a very rare (for the area) Mako shark on a lure…

Then on our second last day we found a good patch of water all the way from Big C area, past the Canyon and into best.

And all of a sudden, they were there but just really lazy and sluggish on the bites.

We ended seeing 6 for the day and missed three bites and next to us Big Bob saw three and missed two, both on the swim baits.

The first fish we saw was around 10h30, free jumping shallow north of best.

Then at 11am in 110 meters we had one on the long right Pulsator Marin Magnet, peeled about 50 yards and off!

45 minutes later we had another one come on the long left express. This time Carl got on the chair, clipped in, the boys started clearing when the hook pulled!

We put the baits and later in the afternoon saw a free jumper. As we come to the area we have a bite on the swim bait starts loading up and off.

We then saw two fish swimming alongside each other, tailing down sea. We put the swim bait right in front of their noses. They showed interest, but only for a split second and that was it!

We had the turn of the tide just before 7am on the last day.

It was a no brainer so we left very early to make sure we were on the northern edge of the canyon on the turn.

We set the lures in a very messy sea around Big C%&/ place and worked south.

Minutes later I told the boys to change the short-left Ruckus (which was jumping all over the place) and put the more subtle Bonito Smoker instead.

Love it when a plan comes together!

As we got to exactly where I wanted to be at 06h58 a fish inhaled the Bonito Smoker. Some great jumps, hard pumping by Carl as usual, some great leader work by Alex and in no time, we released the #300-pound fish.

In the short 15 minutes, it had taken us to do so we had gone fairly south with the current, wind and fish.

We set the lures, worked south and when we got within 100 meters from the first bite here goes the smoker again!

Unlike yesterday they were eating properly and once again we hookup. Made short work of the little guy and we had two releases before 8 am…

We should have gone back to the resort for breakfast as nothing else for the day, except Big Bob released one just outside of us late morning.

A big SE come through just after that and we made our way back to the resort…once again the whisky was flowing!

Great to get two fish on the last day, to make it 4 for 8 for a very difficult trip.

But, you got to take the good with the bad and just enjoy being out there.

Now we have a break until Carl is back on the 5th for another 10 days of fun!

That´s it for now, unfortunately the water is getting warmer so not sure what the conditions will be at when we start again in December, but if the Marloon will not cooperate we will give those GT´s some stick!

STOP PRESS! – The latest PDF packed with options for fishing out of Vilankulos with FishBazaruto.com and Villa do Paraiso. Click HERE to get the PDF. And send it to your friends!