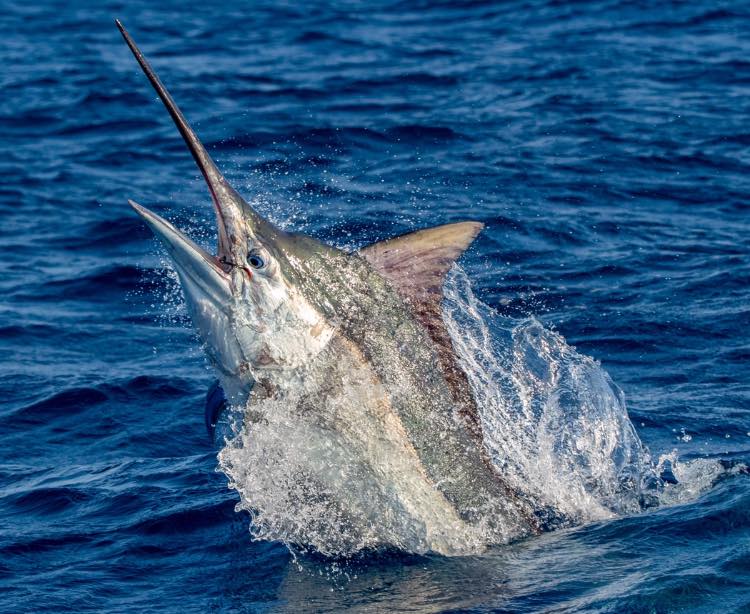 We had an amazing end of November big fish bite aboard Vamizi with 13 fished in the last 4 fishing days which materialized in 11 bites for 7 hookups´s and 6 releases including a 750, a 650 and a 500-pound fish.

They were not straight days as we had a really messy and long cold front coming in which turned out into three straight days blowout for everyone which is extremely rare especially towards the end of November when the weather is generally very placid, which as been the case otherwise.

Johny Velloza had fished for light tackle game fish for us earlier in the year and then booked to come and fish a few days in September when his son, Michael released his first ever Marlin.

Seeing I had a two-day gap towards the end of November he then decided to book and come with his wife, Dad and Mum for a week and fish those two days and try and get 80-year-old Eduardo his first Marlin.

Unfortunately, we could only do a half day on the first day and was horrible and slow out there with the beast from the East blowing the sea into a horrible mess and the usual lock jaw situation.

Very sadly that night Eduardo had a bad night and did not feel too well to join us and thus only Johnny come on the boat.

2 from 2 today and raised another, first Marlin´s for Johnny Velloza.

Had a northerly blowing the all day, quite breezy around noon but otherwise OK, water was really blue and at 26.2c

It was a super busy morning!

Did some bait fishing, lost a good wahoo then picked some bonies and baited two and Johnny caught a massive bull shark. The game fishing was insane and we got back to the reef and caught a bunch of bonnies and had a shark take a lure that Johnny released. This by the way happen again later in the day and he had to release a third shark for the day!

We pulled the lures and first raised one but had no bite and then, right on the tide change got a bite on the bonito smoker and Johnny hook´s up to his first ever Marlin which we released.

Not a monster but great to catch his first Marlin and such a nice guy.

We then pulled the dead baits but at 2pm Johnny who had a real busy day decided to get back to the resort earlier to spend some time with the family. As we came in shallow and where about to take the baits out we get a bite on the swim bait and we release another little guy.

So, then the big blow came and we had to sit it out for 3 days at the lodge.

I was supposed to fish with Carl Jankowitz and then had Michael Wright, it was nice to see the familiar faces but frustrating not to go out. Anyway, we did some light tackle and popping inside and just chilled at the lodge but, we all know how dangerous Clube Naval days can be and 3 in a row can be a Game Changer!

We could wait no more so we decided to give it a go and left the lodge at around 9h30. It was really messy out there but the plan was to fish all the way downwind to the north…at least we did not have to come back into it.

About 45 minutes after setting the lures we get a crash bite on the long right on a really nice fish.

Fish looked in the #700 region but unfortunately, it pulled off.

About 20 minutes later raised one on the same lure but got no bite out of it.

15 minutes or so later we get another bite, also on the Long right and this time we hook up to a crazy fish – the one that took most string after the bite this season – think it was the first time we got into the dacron backing!

We released the fish.

Michael´s Wright biggest Marlin to date and first Black so pretty cool end it to his short trip.

He will be back for the 4th of July BMWC and then next November again!

All fish on our little green devil – the Marlin magnet by Pulsator Lures!