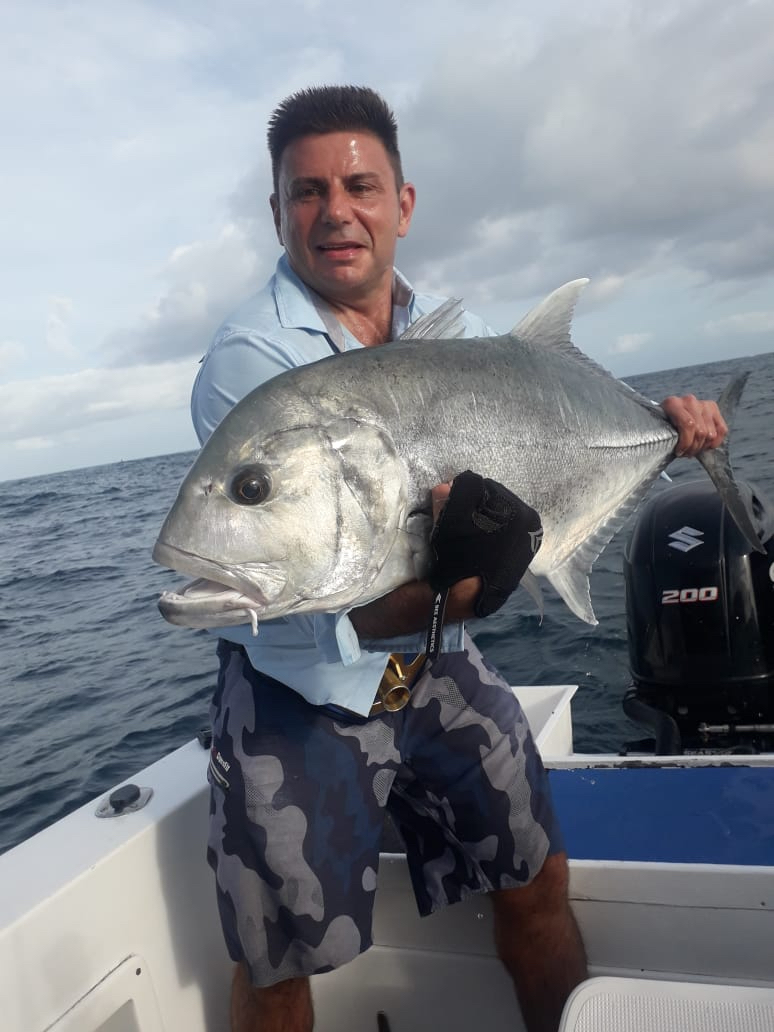 Jigging and popping at the Bazaruto Archipelago

As everyone knows one can have excellent Jigging and popping at the Bazaruto Archipelago and since the beginning of the year we have had some pretty good sessions.

Below are a few pics, including this very impressive one of a taxed sharked on jigging…

A shark that sharked a Yellow-spotted Trevally on a jigging session, that eventually got sharked by a much bigger shark! It’s a wild world out there!

We were fishing with Warren on his boat Strenue and the jigging had been really fast and furious for the past three weeks. Day after day we experienced great jigging and popping at the Bazaruto Archipelago with very few issues with the taxman.

On this day, seeing the water was green on the first day out with Warren the plan was to head out wide in the morning in search of a Blue Marlin for the outgoing and tide change. Then head in for some jigging with the afternoon incoming tide.

Well, we went out wide to our chosen area and worked the area hard and eventually got the bite we were looking for – as usual right at the tide change!

It was a hard decision not to stay out there, but we kept to our plan.

We headed into the first of a few reefs we planned to jig and everyone was VAS on the first drift. We had a good session there with a few species including bludger, yellow spotted, tropical yellowtail, grouper, jobfish, and got cut off by some cuta and reefed by some bigger fish including one we believe was a real nice GT.

The taxman eventually moved in so we had decided this was going to be our last drift before moving to the next spot when three of us hooked up. One reefed us; we released the other but the third trevally got sharked on Charles rod.

Now he had put some wire because of the cuta cut off´s…so nothing broke and he decided he wanted to fight this thing and get his jig back!

Impressive battle, really tiring just to watch. 45 minutes into it and not far from us lot of rod shakes and we think it’s the tail but no, just dead weight and the above is what we got back!!!

Jigging and popping at the Bazaruto Archipelago – Part 2

And the ladies team…

“Right on thanks Duarte for the cool session report! This new format will more regular posts. And all delivered through the all-new FishBazaruto app. That you can download to your phone. Allow notifications and you will never miss a single day of action from the water of the Bazaruto Archipelago.” – Sean

Get in touch via our Rates and Contact page.