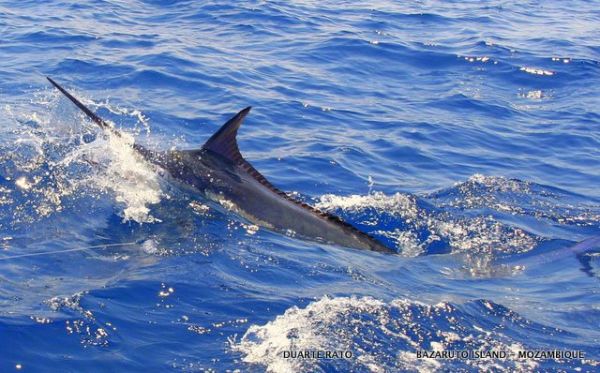 Pretty slow day start to the day as we found green water had moved into the southern area. We picked a skipjack and a couple YFT on the way north and put them as live bait, but both were sharked pretty quickly.

Things got better up north but we only raised one Marlin on a lure but had good action with some more YFT and 4 wahoo between 16-20 kg.

Live baiting was a pretty frustrating affair and we had another two baits sharked and one had it´s tail chopped off by a wahoo. Steve & Virginia Colamarino from Florida with one of the ´hoos…

Guys, fishing as been absolutely phenomenal for the past week. The guys @ the CADSAAS competition had some awesome catches including a fish that almost went a grand and it has just been wild out there.

We have serious internet problems on the island at the moment, but will post some pics and reports as soon as we get back on line properly.

until then hope the sealiners that fished the Inhassoro comp will post some pics and reports!!!

On the final day Gamont II released 3 Marlin – in one hit! Hatrick – bringing their tally to 6.
Quattro with their BIG fish 935 lbs

Awesome, to busy & internet to slow but next day off will post some reports and pics off what as been an awesome bite….

Here´s a small one we released today out of four raised….

Hey Senor Fao, dig them out and send them my way… that is the last BMC 2 I have and it has been on fire.

The wahoo not making things easy as well…

Big strong northerly today which made for difficult conditions and worst greener water. It was a slow morning as we worked the area we found the fish yesterday, first with lures and then for an hour with a live bait that was eventually taxed…

Moved north towards V and VI mile at noon and it paid off with two fish out of two bites.

caught a whole bunch of nice YFT as well…

The last fish which was about 200 gave us a spectacular bite on the short corner legend´s enki 22…as these rat´s do it went wild and put on a tremendous show right from hookup!!!

Bru, we will all miss you at the comp for sure…next year for sure!!!

we post some pics end of the week, its been crazy here, non stop for the last 20 days or so!!! Jiiii, its long days, on a small boat and sometimes not such good seas…not Madeira for sure…but who cares when the fishing is so good. It´s 7pm and I am off to bed!!!!

Its been a crazy busy awesome non stop three weeks…I have a few days between charters before starting again solid until the end of December…so, here’s a few reports & pics from the last 10 days or so!!!