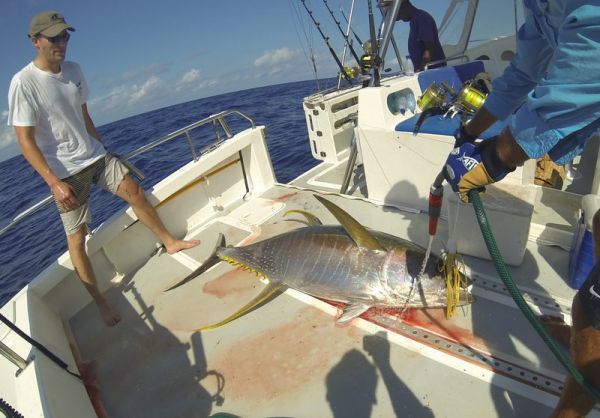 My good mate Morgan had a two day charter this last weekend with Matt, Nick and Alex. Three really cool guys from Texas who live in Maputo. They had fished with Morg´s before last February but had no luck for Marlin.

This time they wanted to try for sailfish and seeing Morgan could not do the charter he asked me to guide them aboard Game Changer, a 38ft Super Cat out of Vilankulos.

The first day we started at the canyon and then worked all the way down south to the pinnacles of Linene in flat calm, but very green water. Conditions were really horrible with such murky water all the way to 160 meters depth and there was a total lack of baitfish…the ocean was dead!

We caught a couple wahoo and king mackerel but it was a pretty slow day. We only saw one pod of frigate bonito, the only surface activity we saw the all day and we did raised have a sailfish there but unfortunately it pulled the hooks after running for 50 meters.

We headed straight out to an area deep of sailfish bay where we have been catching a good number of blues and stripies the last few seasons of bazaruto.

We only found Blue water when we got to 240 meters and when we got to 280 meters, barely 30 minutes after we had set the spread we had a really nice looking blue crash strike the long rigger legends Krakatoa, it miss it altogether but then turned, come into the spread with shoulders and dorsal out the water but it faded. Anyway, this was a good sign and seeing a 5-600 pound Blue in July was very encouraging.

We worked the area for about 20 minutes and then continue heading to our spot. We got there 20 minutes later and on the second tack, from the corner of my eye, I just saw a huge bombshell fall on the Krakatoa again and the reel starting to scream.

Just then we had the short left Legends Enki taken as well but no hookup! Ohhhhh, a double Blue Marlin strike in July…..I think I should fish the 4th of July Blue Marlin World Cup @ home next year!

It was Alex´s time on strike and he quickly harness himself up as we chased the fish down.

The fish had never jumped, but it was pulling solid against a heavy drag, so it was definitely not a striped Marlin. But this blue was really pulling funny and I remember thinking the fish was probably foul hook on the shoulders.

Well, fifteen minutes later we had our mystery solved when we saw the unmistakable color of a huge yellowfin under the boat.

Finally after 40 minutes of hard work for Alex we got the fish close enough for Morgan to take the leader and for me to gaff it!!!

We were cleaning the fish and getting it ready for some pics when the ocean around the boat exploded and we saw about 50 BIG YFT jumping around the boat, like porpoise feeding. What a sight…we could clearly see there were fish there way bigger than the one we just landed. It was mayhem as we run for rods, lures and start the boat again! However we could not get the spread out in time before the fish sounded!

I wish we had good strong solid plugging outfits ready to go on the boat as we would have hooked them no problema!!!!

We took some pictures and then worked the area. 30 minutes later we saw them busting once again about half a mile in front of us, I put some speed but once again they sounded before we got there.

This might not seem a huge fish by Cape Town standards but for this place it is a enormous tuna. In 14 years of fishing Bazaruto the biggest I had caught before was 37 kg and I once lost one I estimated between 45 to 50 kg on the leader. The biggest one I know of in the area weighted 42 kg. I am sure there as been bigger than 42kg that I do not know about but it really is exciting to see such big tuna coming into Baz!!!