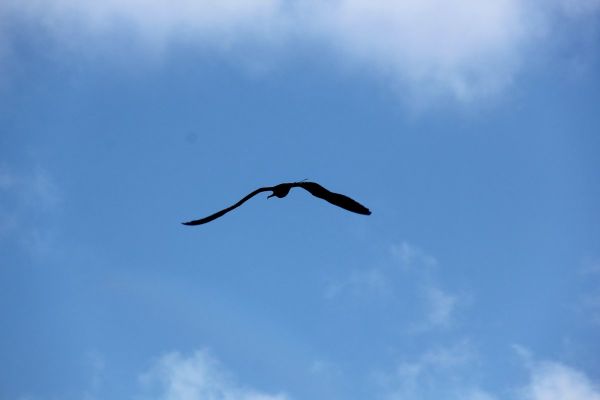 Once again dinner on the QUO VADIS was a real treat. Again the early bed plans faded as myself, Kevin and Carl sat for a few good hours after dinner sipping the most delicious wine.

We started at about 8h30 the next morning and once again were greeted by flat calm seas. Our plan for the day was to head out wide again but this time to a deep spot down south which I had found last July and which had produced the goods the few times we had been there.

We started trolling from II mile and got to the area just after 9h30. Most of the Marlin strikes we had in the few trips we did there were in a very small area, so it was disappointing to see the water was not as good as we had hoped.

I worked the area for an hour but as with yesterday as soon as we started heading out and got to the 550 mark the water turned a beautiful blue colour and again we started seeing a couple of frigates.

Then it was a sh!t load of them flying in circles overhead. It looked so good, it just had to happen!

And then all of a sudden we have this crash strike on the short corner yellowfin colour Big T – TT and we hook up. The fish just jumped once in the distance and I never had a good look but from the fight we could see it was nice one.

After a splintering run the fish went deep. I could see Carl´s grin as he worked the fish on the chair. We got right on top of it and went right up to 55 pounds of drag.

Slowly but surely the fish started giving in and after with that kind of drag and working him at an angle it started to come up.
As it did so we got on top of it and Zito got a grip on the leader. I had a look at the fish and could see it was a tad better than the 400-500 I had estimated.

I could sense the anticipation on Carl´s face. He had to break the jinx, he had now hooked and lost 4 Blue´s…after countless Blacks including two granders it was time he got his Blue.

The fish just sulked there underneath the boat and we come another half inch up on the drag. It was a matter of time and another 5 minutes and we had in by the leader and I slide the snooter over it´s bill.