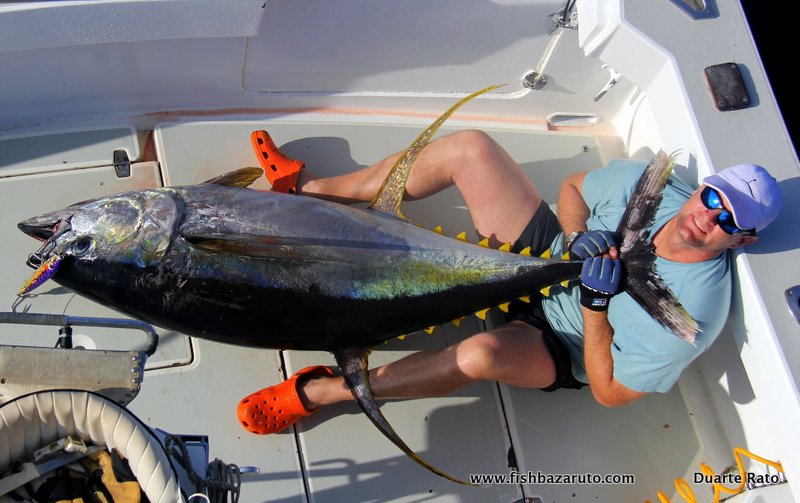 We went back to the same area the next morning, catching a few wahoo and missing a couple of sailfish bites on the way. On our first drift a nice one took my popper and next thing I was reeling in as fast as I could. These things are not easy after hook-up and do not start running straight away. It´s as if they do not know what the hell is going on and invariably they start running in all sorts of directions after hook up – regularly straight towards the boat! Regardless to say, it´s not easy keeping it tight when a 200-pound plus tuna swims directly at you, but somehow I did manage to stay connected!

Something that surprised us was that (certainly because of the depth we were hooking them) these fish did not have the blistering runs we were expecting from such big tuna. We had discussed this at length before the trip and Carl had actually bough a brand new Stella 30 000! But, never did we feel in jeopardy about running out of line – not even slightly and I cannot remember a fish that took over a 120 meter on its fist run on a popper!

But…ishhhhhh did they have POWER!

It was a very shy take and no one could exactly say what I had at the end, or rather how big was it! But Divan who was up on top, and had more experience that any of us with this Ascension beasts, kept telling me that the really big one´s normally do not show themselves that much on the bite. But, after a while it was pretty clear to me this was no baby!

For my part I was grunting, swearing, cursing, groaning and eventually squeaking! My word, this was not for sissy´s, what did I get myself into! I think all the initial adrenalin rush, making my way to the transom (I had been throwing on the bow), trying to get into a confortable position and coming to grips with it made those first 15 minutes real hell. But, eventually I settled and seriously focused on the job at hand. We set up the Black Magic and I started feeling relaxed and at ease, just maybe I could actually pull this off – and I do not think it humanly possible to do it without the help of a harness – at least I know I DO NOT want to try it!

50 minutes of hard pumping and using as much drag as I felt was possible (which was loads) we finally see colour and next thing the gaff´s gone in. We got the fish on board and after a few pictures (OK actually loads of them), Divan & Morgan tell me it would almost certainly go over the magical 100kg mark! What I knew at that stage was that I had actually been lucky – that popper was way down the hatch! It was no walk in the park, but as I was to know only a day later, it surely made it easier on me!

This fish fought so hard Duarte had to have a lie down after wards!

Captain on the rod

It went slow there so we decided to press on further west to some other spots and found them real good again. We started hooking up one after another. However, we were unfortunate to have an enormous number of, rather small but vicious, Galapagos sharks move in. We had two big fish sharked (something Divan had never seen happen there) and another two cut offs – and were left with no choice but to move away.

The fish went 111 kg that afternoon. Certainly the fish of a lifetime on a popper – but truth be told I was having very mixed feelings about it. I felt bad that I had caught it and not Carl or Louwtjie, who were paying for the charter and had so kindly allowed me to fish. That should have been their fish and I decided I would not touch a rod until the end of their charter. With a heavy conscious, I wished with all my heart that their time would come within the few days they had left.

Well, half my worries were gone early the next day! We had 4 on the troll early in the morning on the way to the grounds, including a double, where both, Carl and Lowtjie hooked up. These were some healthy beasts screaming off the ratchet! Unfortunately Carl´s pulled but Louwtjie (who had decided he wanted a real big one on the trolling gear – I can´t blame him for his wise decision), was solid in to it and after a nice fight brought the estimated 90kg fish for a release (a few days later he got an even bigger one which he hooked in 35 meters of water).

The tax system works the same on Ascension Island

Sore arms are the order of the day

By late morning we finally found the triggers all stacked up and Carl and Lowtjie started popping. We had a few hit & miss´s but were enjoying some of the best bites one can see on the popper. I cannot emphasize enough what a spectacle it is seeing those things smash those surface lures, some coming all out the water, other´s merely sickling at an unbelievable pace. At a stage Lowtjie and Carl had a double, this was really exciting stuff and after a few misses and lost fish Carl got into a proper one.

It´s a long tale…one that lasted 3 hours and 50 minutes!

This fish did everything in the books and only after almost 2 and half hours did it come to the surface for the first time. Mistakenly, we tough that was that! But he just went deeper and we kept backing down on him and then circling for the next 20 minutes or more. It was heart-breaking; he just circled 10 meters beneath us, sometimes coming, just out of reach, within 5 or less meters from the transom on that monotonous circle of death. Then, all of a sudden it just decided to make a dash, leaving us speechless and in awe as it made another gruelling run into the depths.

Most of all this was a story of incredible determination, endurance and willpower. Carl fought this fish mano a mano – one man way! Obviously, the more time you spend on a fish the more chances there is of something giving in, especially using such tackle for such brute strength. We had the best of the best but how much can the braid, leader, split ring, knot, hook, etc take – non-asked that question but gloomily, I am sure it hovered over everyone´s mind as it did in mine. Finally it came back on the surface! Morgan and myself had the gaffs ready. Lowtjie was getting more underwater footage of this great fish on the GoPro. Carl was just coolly doing what he had to do, applying as much pressure as humanly possible after such a long fight. Divan expertly did not rush into it but just slowly popped along as the fish come up a quarter back on our starboard side. As it broke the surface Divan quarter spin and backed down hard and we managed to get two gaff shoots. This incredible fish still had some kicks in it and we held on the gaffs for all it´s worth.

The fish went 93kg and we were all heartbroken for Carl that it was just shy of the 100 kg mark – but what´s seven kilos after what we had just witnessed – I for one know Carl will never forget the experience and great achievement!

And another huge YFT

Strong coffee grinders and huge yellowfin tuna…what more could you be after!

Now thats how they should swim!

We caught a few more good Tuna on the troll the next couple days including probably the two biggest fish we saw the all trip, one for Carl and the other for Louwtjie. We also got some more nice wahoo, amberjack´s and black jack´s and missed a couple sailfish.

I forget the exact numbers, but we weighted 3 and must have released at least another 8 over 80 kg´s and two of those on the troll could have gone past the magical 100 kg.

On one of those last days we got back and there was a young German dude there, all shaken and dazed! As we approached the pier head he asked if he could borrow our tender boat. He told us he had just landed a beast of a tuna on popper from the shore….YES, THAT IS CORRECT, FROM THE ROCKS and his wife had gaffed it! Off he went and later that day we went down to look at the fish and it weighted an amazingly 104 kg, apparently and not surprisingly a new World record from shore! Can you imagine that? After experiencing the power of those fish my mind is still having a hard time grasping it – what an accomplishment!

Carl & Louwtjie left after that, it was a pity not to have caught them a big blue for the cheery on top of a great week, but we were all in wonder at what we had experienced and delighted to have done it in such good company.

But, there was no rest for the wicked & after a morning´s rest we were out there again the next afternoon…