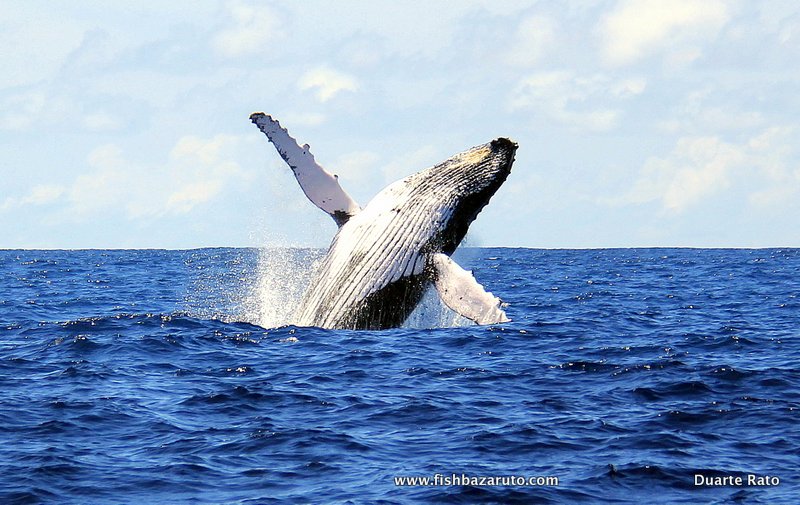 Every winter to spring, roughly between late June to early October the Bazaruto Archipelago is visited by the remarkable Humpback Whale, a species of the baleen whale which range in length from 12–16 m (39–52 ft) and weigh about 36,000 kg (79,000 lb).

The area is a great destination for Whale Watching and our fishing guests are privileged to see them while trolling for their favorite game fish species and in the peak months are literally guaranteed to see dozens in a single outing.

This year as been no different and the last month they have been everywhere and we been treated to some very special sights indeed. Seeing this are some of the most friendly, active and playful whales in the Oceans it´s common to see them up real close just chilling on the surface but also breaching, lob tailing and tail slapping, pectoral fin slapping, spy hoping and blowing.

They are also known to interact with other cetacean species and last week while trolling out wide for Blue Marlin we had what must have been over sixty humpbacks all around us mixed up with a large pod of bottle-nose dolphins. Later that day we also had an encounter with a large group of pilot Whales.

As is usual throughout most of the year we have also had very big pods of the acrobatic and friendly spinner dolphins playfully riding on our bow. Sightings of common and humpback dolphins along with many different species of turtles are also a regular occurrence, including the impressive leather-back.

Divers have been enjoying the great visibility winter is known for and besides all the usual species they have reported exciting encounters with lots of mantas and a few whale sharks and of course humpback whales!

So yeah, fishing out of Vilankulos and Bazaruto is just not about catching heaps of game & billfish but also a great opportunity to spend an incredible day out in the Ocean seeing some remarkable animals up close and personal…

Otherwise fishing as pretty good with still a few sailfish showing and a good number of wahoo, king mackerel, tuna and a few other. Will post a report from the previous two weeks shortly…