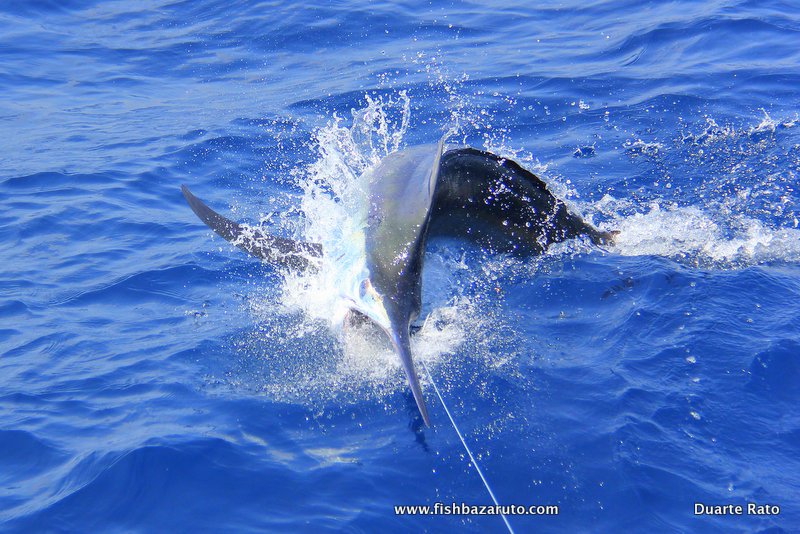 The fishing Mozambique, particularly off the Bazaruto Archipelago got off to a great start into the new year. The boys have been reporting some insane light tackle action inshore with a lot of darts and crocodile cuda (kind mackerel), bludger kingfish and other trevally species, tuna, bonnies and all other kind of game fish. Further out there has been a fair decent amount of wahoo, a few dorado but most of all and despite not specifically targeting them there has been a lot of medium to small and some VERY small Black Marlin (what we normally call Rat´s) around. Most fish under 50 pounds and as little as 15!

They been reporting a fair amount of strikes of these small acrobatic speedsters on small halco´s, rapalas and small lures and strip baits they are using.  Seeing they targeting game fish their set up is not the best to hook them up on the small treble hooks but when they do our clients are having great fun fighting these on 20 and 30-pound tackle.

It seems the number of very small Black Marlin have not only been abundant off the Bazaruto Archipelago early this year but all along the coast. Fishing reports from southern Mozambique have shown many releases of these youngsters all the way to Inhambane, Inhaca and further south in SA.

It was interesting to see an early end to the BIG fish season in mid-December has the water´s radically warm up into the 28c plus. But, all of a sudden the fish where back in their miniature size giving the guys a real treat amongst all the game fish action.

However, despite hardly any boats specifically targeting them at this stage, there has also been a few bigger fish around in the 150 to 300-pound range. Fishing out of Inhassoro Yellowfin recently had a good spell with five fish in three days. The first day they got a 240 lbs Black on a 30-pound rig on a small tuna lure followed by another fish of 450 pounds. Out wide produced 200 pound Blue the next day. The third day they again got 2 small Black´s which they released.

After a few days of getting a good number of strikes and a few releases on small fish while pursuing Game Fish, the boys on VAMIZI spoke to our clients and they agreed to try and put a small Yellowfin live bait to see if there were any bigger fish in the area. To everyone´s amazement within less than 15 minutes a nice Black took the bait and they released the fish at 500 pounds.

Mozambique´s fishing in February can be quiet variable, especially in the southern end. Although we have had some great fishing in the past, February it is not the most reliable time of the year of the Bazaruto Archipelago, mostly due to extremely high water temperatures making everything go a tad lethargic. However, down south at Maputo / Inhaca area this is prime time for the Blue and Striped Marlin fisheries (along with a few Blacks) and the boys down south have already started having some good numbers with up to 4 or 5 raised fish a day. In the next few weeks we should see some really good fishing from the area. We should start fishing hard in Bazaruto from early to mid-March again and looking forward to a year that´s looking really busy with lots of travelling in between…

Tight lines and a happy new year to you all…