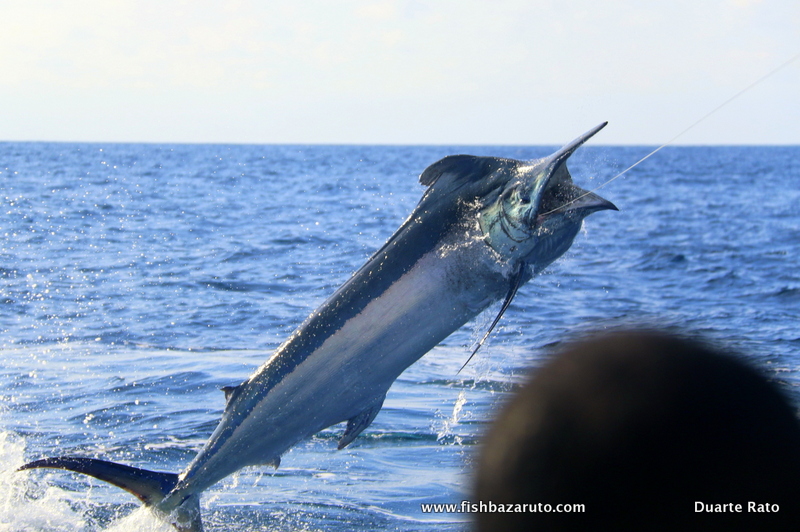 The last few days have not seen fast action but we sure have seen some exciting stuff with a nice #550 that jumped all over the place and a Sailfish jump on board VAMIZI!!!

Neil and Debbie Bernard fished with us in mid-September this year for the first ever time. We had a ball then, light tackle madness with loads of kings and queens and a very special fish for Debbie.

When we had a cancelation for late November they immediately picked up the dates and this time round where joined by the Colonel and Rodney. We fished three days and although things have gonne slow we had a fantastic time and some remarkable catches.

As it normally happens by the end of November the fish go real lazy for the lures and are only focused on bait. The problem is that there is no bait around. After a November where there was too much bait now it’s all vanished, but when you do get one you bound to hookup really quick.

That´s what happen on our first day fishing, the 26th of November.

We did not fish the previous day but did hear that Shobi Shobi released a #600 on a live bait down south. The day before that Veleiro also got one on a swim bait about the same size.

Veleiro´s 600-pound fish on a swim bait and Duarte Jnr. with a hammerhead shark dorsal fin – this 200 T-bone was chopped I half by a tiger shark while we were fighting it!!!

We started the day trying to catch some bait to swim and skip real shallow.

But, apart from a couple of kingies which we released we could not find any. Picked up and run to the pinnacle at Sharkville.

Put the bait rods out and caught a small bonnie. Really a tad too small and I had my doubts if I should put it out. But when it’s like this you can´t be picky and so we put it in the tube and run out.

Put it out once we got to 55 meters and amazingly this thing was swimming like a champion.

Now the current has been absolutely ripping, almost 4 knots.

We worked down with it and in less than twenty minutes where in the zone out of Benguerra that has been so good to us this season.

Right on the bunch of marks we had a bite.

As soon as the line come tight we started to come up and hookup. Slow sluggish run. Then it just started going properly and we knew it was a Marlin even before the #550 plus fish started jumping.

20 minutes into it and we into a nice fish. That is one way to start a charter!

Rodney jumps in the chair to fight his second ever Marlin.

The first was a #600 he caught on the 3rd of November last year.

But now we had a nice one that was just ripping hard and gave us a real nice show with some amazing jumps by the boat!!!

Rodney did great work and we had the fish on the leader and under control in 20 minutes.

Or so we thought!

Ohhhhhh we had to fight this thing all over again!

Another 10 minutes of sun setting it and we got him back for a clean release.

High five´s all around. What a way to start…..

Put the lures out and work against the current for an hour to get back to sharkville looking for more bait. But, none was to be found!

We set the lures and worked the area of benguerra hard, down to the BIG C place and up current again but real slow. Absolutely nothing on the surface.

At midday decided to change tactics and work the Giant´s area.

At 1pm the ENE was now blowing a breeze.

We changed the Ruckus on the long corner for the smoker.

13h24 a fish about #400 comes in on the smoker. Bill out the water. She come on the lure three times and on the fourth took a swipe and missed it completely and vanished!

We then missed a wahoo and then pulled the hooks on another.

14h42 we coming in early and just outside II mile get one about 250 bite the long right. Pulled some line and come off. Leader chaffed all the way a meter pass the lure. Obviously it missed it way ahead and was wrapped on the leader. Tough luck.

We went into the reef looking for some bait for tomorrow.

Got a real nice yellowspotted kingfish and a couple other small big eyes and finally got 2 beautiful queenies for swim baits for the next day.

It was blowing a good 15 knots from the NE as we made our way to V mile the next morning. But, it settles down as the day progressed and it was beautiful out there.

It went pretty much like yesterday, except we missed the fish!

Get to V mile and for a change there are skipjack tuna everywhere.

We get one put it on the tubes and run out.

Within two seconds and we have not yet come up on the drag this fish around 200 starts jumping and we can see its all wrapped up on the leader. Had him on for a few seconds before coming undone.

Unfortunately, that was pretty much the Marlin action for the day.

It was pretty slow for us and the other three boats out there.

Veleiro raised one on a live bait they had for 7 hours and that was it.

Absolutely no surface activity, no bait or anything happening!

We spend the day with a swim and a skip bait and finished it off with the lures but nada!

We started our last day looking for bait and persisted for about three hours.

Unluckily all we could catch was some cuda.

Put the lures out and work back to Giants with the current tacking all the way from the north of sailfish.

The NE was ow blowing pretty hard although the sea was really settled.

However, it was now pushing in green water and by noon we were tacking real deep.

Just then I decided to do a shallower tack out of V mile to go in and see if there were any signs of bait.

55 meters and we get a knock on the long left. Then again and again. Thing it’s a small fish and as Alex is putting the marker back on the rigger the line is ripped out of his hands and we hook up.

A sailfish starts to jump.

Neil jumps in the chair.

Makes quick and short work on the fish on the heavy tackle.

Alex grabs the leader as the fish is swimming along us on our starboard side.

Next thing it’s between the engines and the gunwales and before I can accelerate it flicks its tail and jumps aboard.

Neil as got his feet around his ears on the chair.

Alex and Lourenco are just looking at me like…what now!!!

First time ever I have had a billfish jump onboard, luckily no one got hurt including the sailfish that we managed to release it without too much of a scrap.

Pretty exciting stuff for a day without much excitement otherwise!!!

But all in good fun and we still had some nice popping and spinning sessions catching yellow spotted, big eye and even a Giant Trevally, the first ever for Rodney. Not a monster but not bad on the light spinning stick and ice cream.

Big news coming fresh from Oz where a 1 431-pound Black Marlin caught on Too Easy in Fraser Island, Australia.

This is the second biggest Marlin weighted since Peter B´s 1 442 in 1973 and the biggest in the world for the last 45 years…just insane!!!

Apparently and according to Capt. Russel Gage this huge female came into the lure spread light-up electric blue and surrounded by an escort of several small males before taking the short-corner lure.