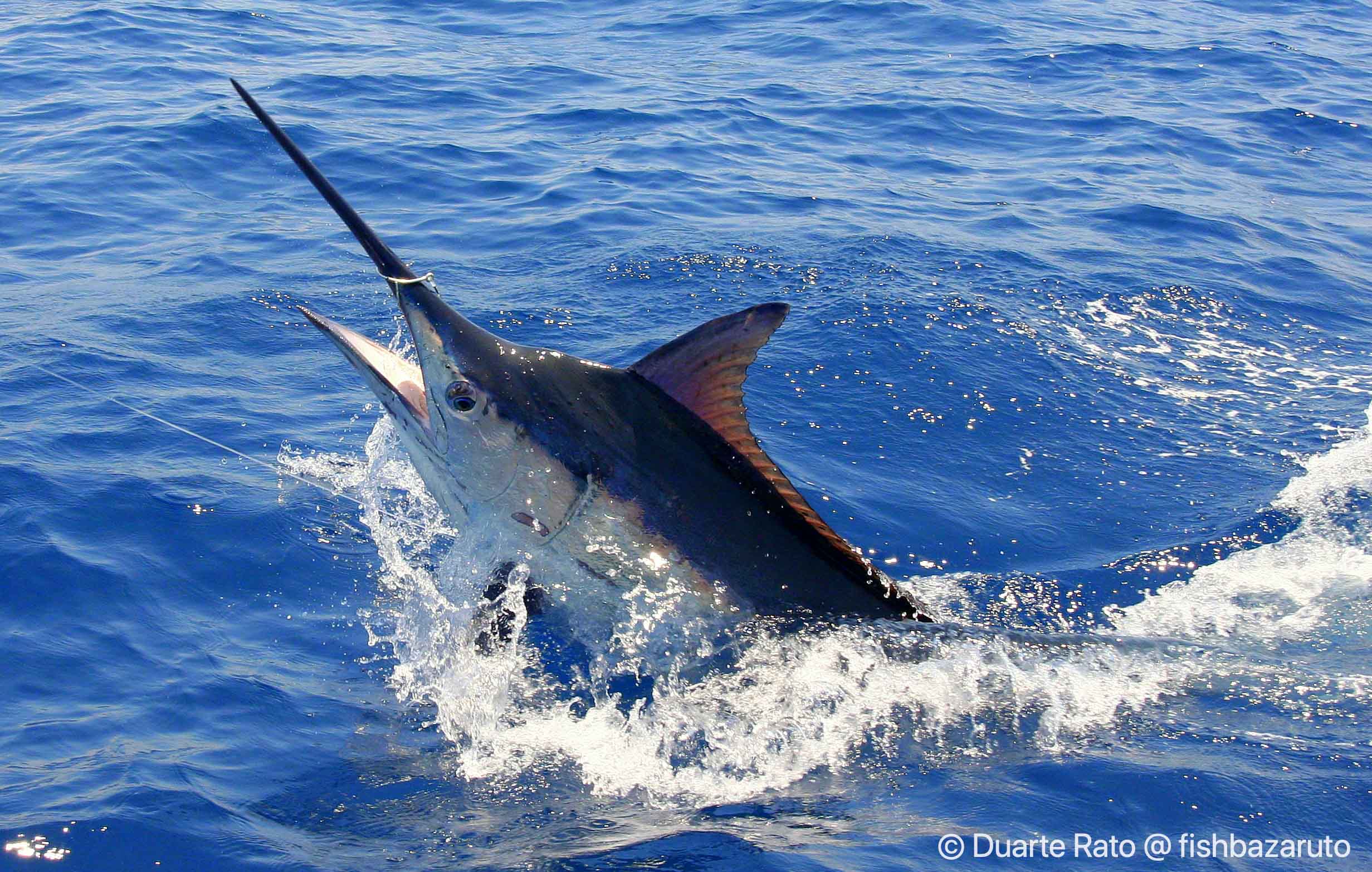 We are ready to go, the big guns are out, reels respooled, lures, live and dead bait traces done, bait catching rigs ready. This is it, the time to chase those Black Marlin in the Bazaruto Archipelago.

From early next week to mid-December we will be out there, working these beautiful waters in search of those Giant Black Marlin and in the process hopefully releasing a few small to mid-ranger´s along with a few Blues when conditions are not correct at the edge.

This is East Africa´s most exciting times and the best chance at a grander size fish in the area. There´s been enough cold SE fronts, a good number of juvenile Blacks around and shit loads of YFT tuna in the last few weeks to get a positive vibe for the months to come. Two days ago Marlin released a 600 pounder out of 2 bites and lost a bigger fish a couple of days before.

Despite the water still being in the mid 23c we can feel the warmth coming in and with it the other culprit´s, skipjack will move in with those big spawning Mamas.

We have caught Blacks over #500 in every single month at Bazaruto and one can realistically target them year-round. There is a really good run from mid-March to mid-June, and we have released fish to 800 in March and April and a grander class fish in May. But this surely is the best time for the big girls and from Tuesday we will be out there, day I and day out chasing them.

Having fished in many top Marlin spots around the World, this is by far and wide and most challenging, interesting and stimulating area I have ever fished. We catch the vast majority of these monster in water as shallow as 40 to 140 meters, a few miles from the breathtaking beautiful dunes of Bazaruto Island.

This means a gigantic influence on tides with the huge amounts of water rushing in and out between the Island gaps. Bait and good water shift permanently and where you will be in relation to it makes all the difference. Get on the edges on a spring outgoing and you might as well be enjoying a tequila sunrise by the pool.

But the most interesting and challenging aspects of fishing these waters is that those blacks are finicky and moody. In general lures, dead and live bait all work here. But, it’s when to do each and where that makes the ultimate difference…

If there are shitloads of surface action as it normal at Baz and the current is not heavy, lures seem to work a treat. Get those days when the current is ripping and nothing is showing up top and specially if you find a heavy thermocline, then bridle that live YFT, skipjack or bonito and work it with the current and you in the game. All those baits are a beauty but those small YFT are the edge. Big one´s too…but, remember, the biggest the bait the biggest the fuck up…and elephants do eat peanuts.

But, if the fish are running, the bite is on and they quarreled in a zone (and live bait is scarce or the taxmen is on the prowl) your dead bait program is the best way to go. It’s a more controlled scenario which makes for the best hookup set up. A 4 kg skipping bonnie and a swimming needle scale queenfish on the opposite side. That will work….for sure!!!

And, seeing that hungry, pissed off 800-pound Black jump and inhale your skip bait is a sight to behold.

If it does not get your blood pumping then you should not be there!

It´s hard to explain how grateful and privileged we feel for having been able to fish these amazing waters in the last two decades. In this time and age how can one be so lucky to have one of the most amazing fisheries on earth with hardly anyone around you.

We have Blues, stripes, sailfish and an amazing variety of game fish to top it off,

Short runs to the fishing grounds, incomparable scenic beauty, great resorts, whales, dolphins, leatherback turtles and dugong´s too see and the chance of hooking up to a real mammoth– the fish of a thousand life times!

What else could one ask for… 🙂

A few pics from the last few seasons…. 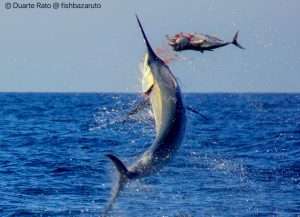 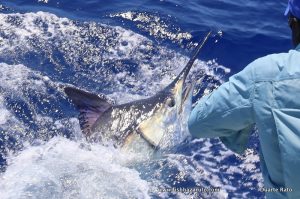 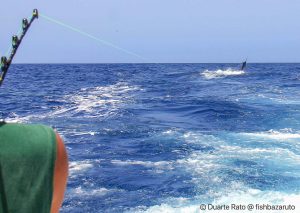 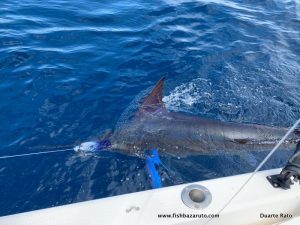 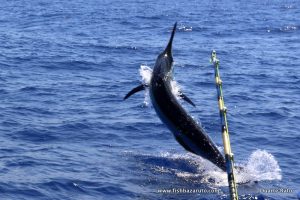 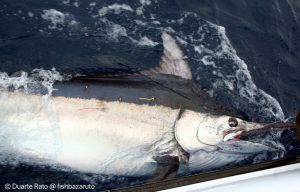 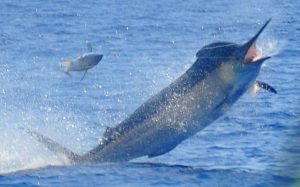 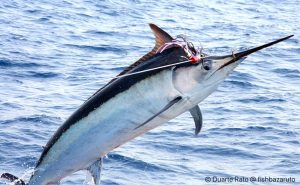 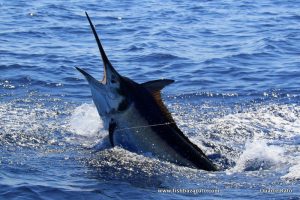 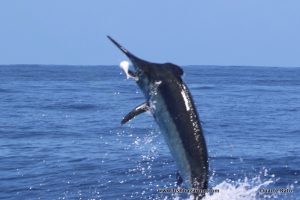 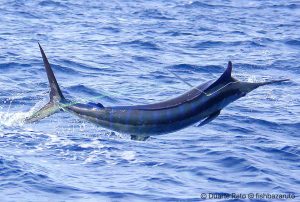 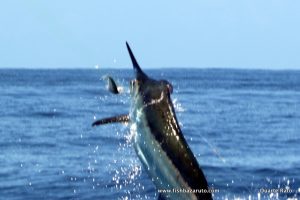 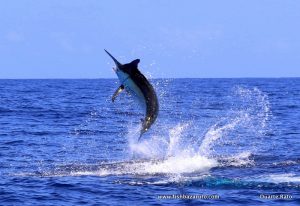 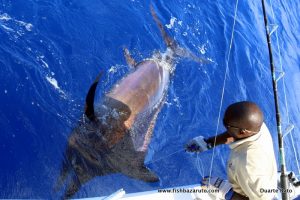 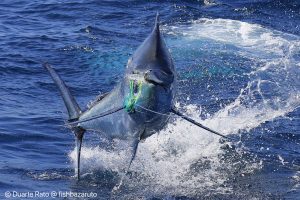