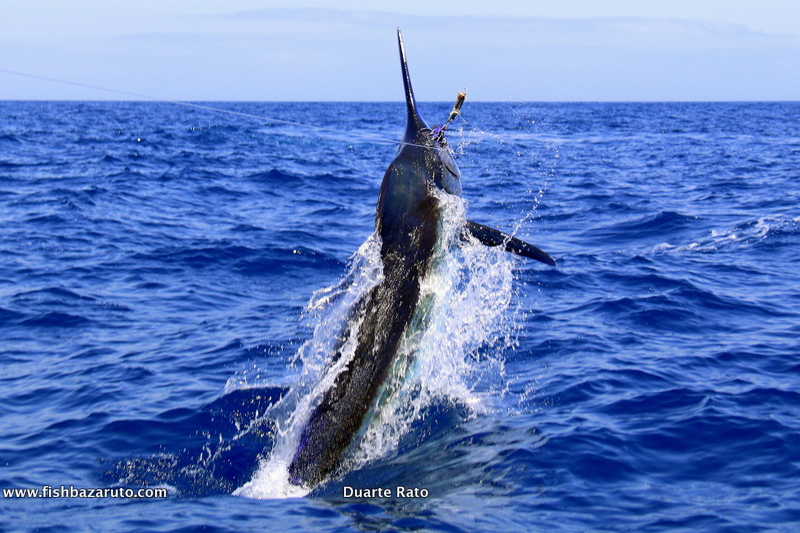 Our next charter was Carl Jankowitz, Peter Dowling and Tony from SA. Great to have the guys here, Carl and Peter have fished with us on Bazaruto for many years and they have both weighted and released a few 1000-pound fish with us. They have also done a few trips elsewhere including Ascension, the GBR and some other places in Mozambique.

I really wanted them to experience the numbers of Cape Verde Blue Marlin, unfortunately the fishing was not that hot but we still got a good number of fish and most of all they got to see what pitch baiting is all about! The absolute ultimate and the boys where in awe.

Our first day could have not been a better introduction and we raised 4, got three bites and released two fish. The first a 200-pound caught on a lure early in the morning. Then we had a double, pulled the hooks on the lure but released one on the pitch going about 200 as well.

That last fish that threw the stomach was fairly hooked in the corner but as I saw later when I enlarged some of the pics I had taken while the fish was trashing on the surface, it was gorging out some big squid that, by the looks of it, it had eaten not so long ago!!!

Looking at that pitch baiting Carl was really keen to try and get one on his 30 000 Stella that I had brought along from Bazaruto. We had been keeping it under wraps seeing the conditions had been really tough fishing the north channel. But, on the third day we got it ready to give it a go if the right fish come along.

On the third day, it did and we hooked up to a good 250-pounder that gave Carl a real nice workout for 45 minutes. Strangely and Unfortunately the leader broke when the fish was about 30 meters from the transom. Quiet a let down, but it just gave him, and us, even more reason to get in one on his beloved Stella!

The next day we got one about 300 on the pitch for Tony and later that morning missed one on a lure. It was so rough we decided to make a short day of it and where back at the bar just after noon.

Well, the next day it was Carl´s turn again and obviously, the Stella come out. We decided to fish Sao Pedro and the East, giving us much better conditions. At 10h30am we got one looking about 200 smash the short teaser smash bait and Carl did a (what we tough was) a perfect pitch and we hooked up on the trusty Stella.

What followed was an hour and a half struggle and for the first time ever I saw Carl out of control on a fish. It was down, dirty, hard and unforgiving. Eventually the fish come up and when we got a wrap we where not gonna let go. As the fish jumped we understood what all the fuss was about. This fish was foul hooked on a circle on the pitch in the shoulders!

Hi 5´s all around and once again what a way to finish it off….

On the 8th June, we started with Dirk & Kirk from Germany. The fishing really slowed down for the entire fleet that day, but we managed to find one down the East side on a lure, BB RPP!

It was kinda slow but there were some very decent fish around and there was a good bite in the East very early in the morning. We left a tad late and by the time we got to the East both Dimeu and Nha Cretcheu where both fighting big fish right next to each other.

Dimeu´s fish died on them and went a good 950 pounds.

Nha Cretcheu had a brilliant day and got an 850 in the morning and a 600 straight after.

The rest of morning was quiet but right after noon there was another bite where everyone either raised or hooked up next to each other within half an hour. We were the first to hook-up but we were somehow unlucky as our bite turned out to be a White Marlin. A beautiful fish though!

On the day before last with Dirk and Erik we had great crash bite on the longest right teaser. The fish come in so hot that it actually shipped away a large part of the Mars from Makaira Lures.

We hooked up on the pitch immediately. Absolutely awesome fight right on top with the #450 fish giving us some great aerial displays.