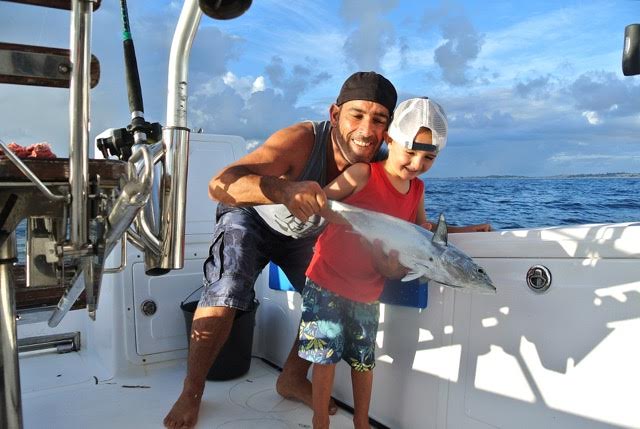 As you know after the season I have chilling with the family and finalizing all the bookings for the rest of the year for Bazaruto and Cape Verde. But, after cyclone Dineo (which as you know was much kinder to us here in Vilankulos / Bazaruto than our friends further south in the Inhambane area) we finally have had a spell of absolutely gorgeous weather and my boys at Bazaruto told me about excellent light tackle game fishing. So, yesterday decided to take my boy who just turned 4 years and is obsessed with fishing.

Man, it was absolutely unbelievable from when we got to V-mile area yesterday morning until midafternoon when we come back was going mental. I think all the churning caused by the cyclone as just moved up all these nutrients and the ocean is alive everywhere you look. Between V mile all the way to the north of the Island at any given time you seeing 5 or more schools of Yellowfin tuna, skipjack and bonnies gorging themselves on tiny oceanic anchovy! It´s all small stuff (what we in season call bait) but great fun on the light tackle. Perfect stuff to target on the light spinning rods.

We had nonstop action from the start and everyone hooked up simultaneously all the time. It looks like a slaughter and we did take a lot of fish out but we released much more and we were all with our freezers empty and brought some fish back for the boys. Funniest thing was Duarte Jnr, who we have now nicknamed gaffman, who at a stage did not want to take any rod but just wanted to gaff the fish, every single one of them…hilarious!

And he knows when they really small he was like ´´this one we throw back “!

By 10am he was so tired he was falling asleep but kept being woken up by screaming reels and he just could not resist. To let him have a much-deserved nap (he did wake up at 4am), and despite the water being horrible dirty and green I decided to fish for Marlin for a couple hours. We first put a live YFT but that did not last long and we were hooked up to a shark within 20 minutes, which obviously woke him up againJ! I decided to put the lures and head out wide in search of blue water which was not to be seen up to 500 meters out! It was green and we never raised one, did get a decent wahoo for Rafi tough. When we come back early afternoon it was still going wild and the mayhem continued before we decided to call it a day at 3pm.

We have a strong SE moving in on Sunday which should push in the blue water and I am sure some fish with a sharp nose with it…there is enough bait to make them come! Until then we will just have fun on the small stuff, back at it tomorrow…