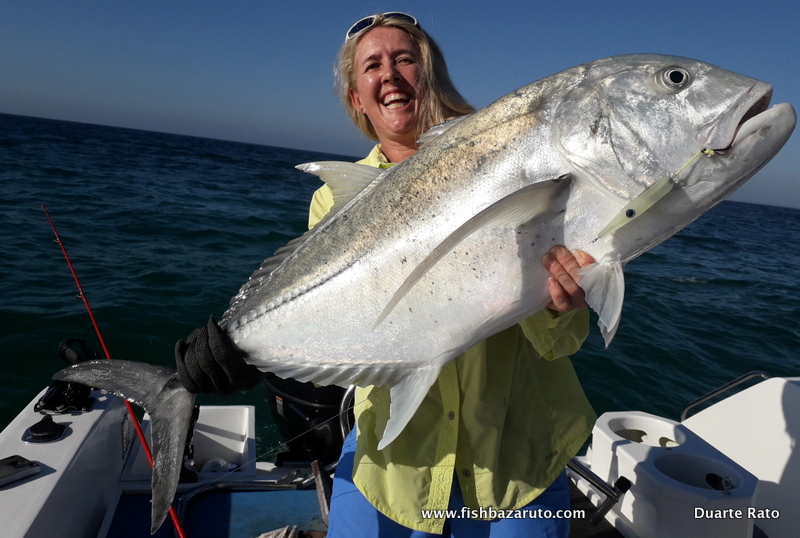 Giant Trevally for Debbie and much more…

We started the season and our first guests Neil & Debbie from Sa and Darren & Sherryl from the USA keen to do light tackle for their three days, primarily chasing the king of the reef´s – the Giant Trevally. They could not have time it better. it’s all happening, gamefish everywhere.

First day taught. A stiff NE and not knowing the ladies where such hard-core fisherwomen I suggest we got to paradise. Spot on!

Ultra-light spinning at paradise is most times a blast and I was happy with the drill to hoard up some bait. Which we did, queenie after queenie we stocked them swim baits pretty solid and had a great fun morning with a few small released trevallies’ as well.

Midday got off on the island where the boys at set up a table under a gazebo and barbecued some prawns, chicken, meat and other delicious gourmet stuff blended down with an ice-cold chardonnay. Back for a few drifts in the afternoon and some more queen’s and kings.

Then Debbie, who persisting the all day with the GT ice cream I rigged for her. I did it with serious love. She does not miss a drift and just carries on. Persistence pays dear and that spinning outfit goes spinning with a surface screamer. Can only think a big cuda, so no worries about getting reefed in all 8 meters.  Yeah right! Next things, head shakes. Then straight to the beach, a hundred meters away and closing in fast. Head shakes again! Hiihhihii now I am driving Vamizi like chasing a big Black. This is no cuda but the unmistakable Giant Trevally. Debbie really is an amazing angler and despite holding it a bit high works that light tackle stick with the outmost finesse.

Twenty minutes later we see color. Right there, a cobalt green and silver hexagon that leaves no mistake. This is a nice Geet especially on this tackle and place. Now everyone is shouting instructions, Neil above all else. Debbie is `ìn the zone`, she just keeps doing her thing. And, expertly brings this beauty in for a couple photos and the release. All 18+ kilos of pure muscle. Beauty! It’s not every day you catch a nice fish as such in that area… not bait this one. Nice surprise and a nice end to a really chilled day with awesome people.

Despite a strong wind from the SE, our second day was yet another maningue nice light tackle fiesta. Well over 40 game fish released, mostly spinning & popping.

Early morning, we did some trolling and smashed the Yellowfin tuna and had lots of other game fish taken by sharks including a big wahoo. We also released one of those man in the grey suits at around # 200 pounds.

With the pushing tide around 9h30 we went to the reef. The next 2h30 hours, before the slack where insane. Every single drift everyone went on. Fusiliers where everywhere. Garfish and ballyhoo being chased all around us. Five spotted quennies where being smashed.

All in all, we released well over 20 kingies / trevally´s, most of those where Bluefin´s including some decent size one´s but also big eye, brassy, black and yellow spot. And this did not include another 4 Giant Trevally´s (AKA GT´s) released. They do have a mention of their own.

Once again Debbie was on fire with her GT ice cream and I found a Bobara 100 on Neil´s bag of tricks. That is my favorite all round stickbait and after a few casts he surely got the best Giant Trevally of the day.

But that was not all of it. During those ridiculous 2 hours, we also released a bunch of other fish including great barracuda, tropical yellowtail, garfish, cuda, rockcod´s and some other critters.

At the slack, it went slower and we decided to troll. Hard going with the wind now blowing at about 20 plus knots. But we did get into some more fish including 3 cuda, bonito and some more Yellowfin tuna. Hooked a nice fish, on a strip bait but it was sharked after a nice fight by Neil.

Our other boat IBO did a half day in the morning. It was slow down south where they started so they trolled up north and found some Yellowfin and Bonito as well. Just outside of us they also had a Black Marlin about 300 pounds take one of their lures but spit the hook after a few jumps.

Only Darren and Neil come out on their third and last day. It turned out to be a peach, really nice and calm.

But slower, because we were target prizing.

Did some spinning and then got some green jobfish, yellow spotted kingfish and some other couple species on drop-shot.

As the last few days the game fishing was wild and we caught some yellowfin and bonnies as we made our way deeper.

A Black or a GT for Darren – the mission for the day!

We put the lures out for four hours but never raised one as we worked south.

We then moved into 9-mile and on the first cast Darren had a follower and Neil had a boil. This was promising, except the fish where just not aggressive.

We had a few other boils including a big one that missed Neil´s stick bait and a cuda that rocket into the air but missed. But, eventually Darren got one up and on the third try it hooked up and we released it about 16kg. Darren got his fish and awesome one on the tackle he was using. I was skeptical about that little whippy rod he was using but he proved me wrong.
Then, we moved further south where Darren finished the day with a blackfin shark on popper that gave him a nice run.

That night we said goodbye´s and finished it off with a sushi and sashimi meal of the Gods. All well-watered down with a perfect Shiraz.

Thanks Neil, Debbie, Darren and Sherry, it was awesome meeting and spending time on the water.

What a great few days…and will be awesome to have them back again in November.

Tomorrow we start with Craig from OZ. Cool guy on his second trip to Bazaruto.

Last year he got his first Black & Blue Marlin plus a few beefy wahoo and other game fish.

It’s been beautiful out there and the humpback whales are everywhere.

How these amazing shots by Dr. Mario Lebrato

Ohhhh. And a really cool story.

My mate Janneman Conradie was filming the other day and seeing the water was green on the inside he went deep. In about 360 meters of water he spotted some commotion far ahead. Upon arrival, he saw that it was a pod of about 20 Killer Whales. They had killed a baby humpback calf and where tearing it apart. He got in the water and took some amazing footage and got properly harassed by the sharks which where smelling the feats but, for once, not allowed to join in.