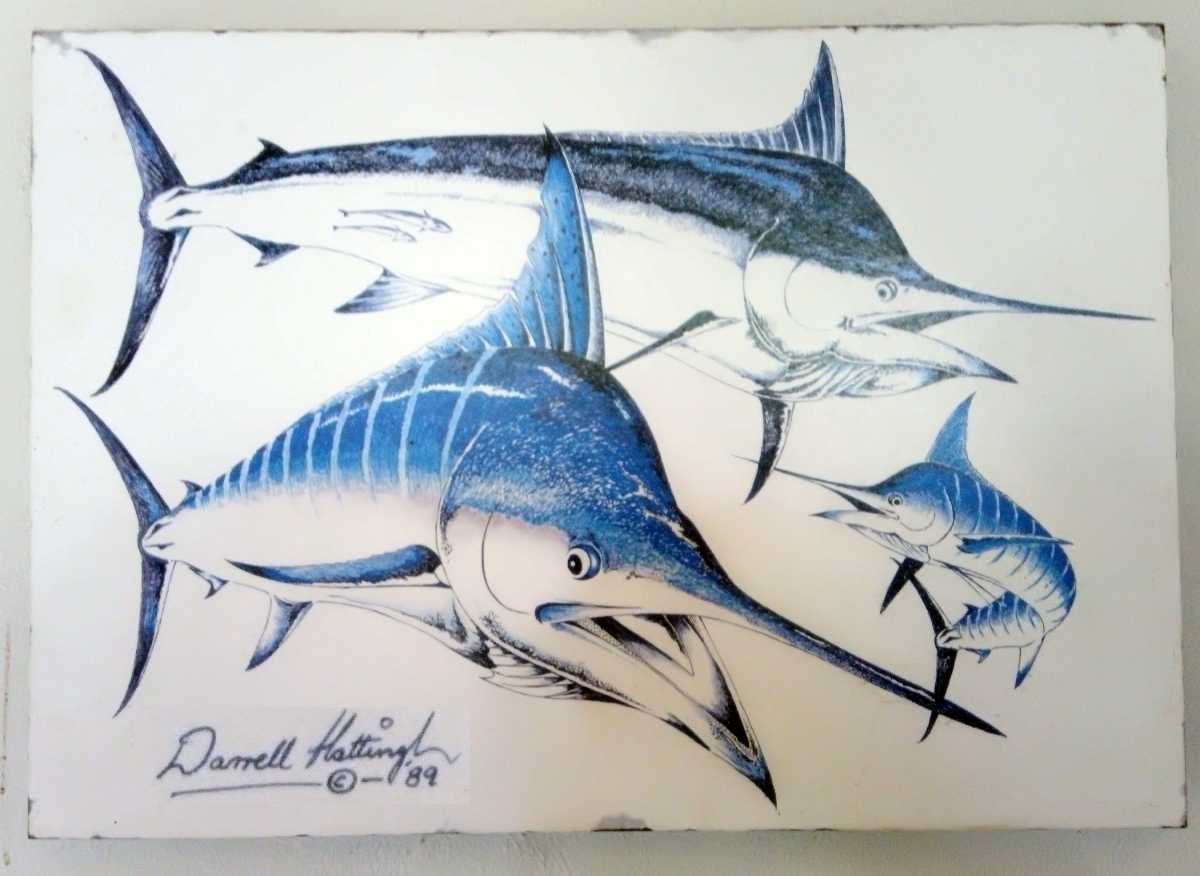 Special thanks to Darrell Hattingh (c) for the featured image.

After the recent tiny little bit of controversy on whether Little Hooker´s 988-pound Marlin recently caught in Guinjata, was a Blue or a Black, I asked Duarte if he could pen up an article on how best to tell them apart. This is what he put together for us. I sure learned a few new things about this fun puzzle, and I am sure you will too. Thank you Duarte, keep ’em coming – Sean

“Bro, they have so many differences, that once you have enough experience you don’t really look at certain characteristics but at the whole situation. Do it this way, and in most cases, you can see the differences immediately. Except maybe in very small fish. In all honesty, in most cases, it’s almost like distinguishing a blonde from a brunette.

They are completely different animals, not only on their morphology but also on their habitat, behaviour and fighting characteristics…let’s start with that (Ha ha Duarte the blonde and the brunette?! I think the human versions fight just the same! – Xona)

Almost everywhere, except certain volcanic Islands or offshore banks where both occur, Blacks are relatively shallow water fish associated with landmasses as opposed to Blues, which are deep open water fish that like the edge of continental shelves. The Bazaruto Archipelago certainly epitomizes this, where about 90% of Black Marlin are caught between 35 to 140 meters of depth and Blues from 300, but mostly between 450 to 600 meters of water!

However, there are exceptions to the marlin identification set of rules.

September last year we had Casper from Denmark hook a #500 Blue in 120 meters. This is only the fourth Blue we have caught in Black Marlin grounds on the Archipelago in twenty years.

Your mind is not ready for it so you don’t even evert think it can be a blue!

This fish did not do the normal explosive run Blues normally perform after hookup. Then, 15 minutes into it, we have the fish jumping on our starboard side, erratically change direction while I am taking pictures. Next thing its coming right at us. Almost got caught out! Ended jumping and missing the transom by a few meters. Then went on jumping and greyhound like a maniac on a circular motion.

Straight away we knew this was a Blue, a Black will never do that, not with that speed and unpredictability.

You can see that video here…

A couple years back, our first day of the Blue Marlin season in Santa Maria.

We had a slow day as we worked the normal grounds between 350 and 550 meters. With only four dorado we decide to troll the lures all the way back and look for a Black.

In 170 meters a massive fish inhaled the long corner lure. At that depth, we all thought it was a Black. Two hours into it we boated the tail wrapped fish, the rest is history…as it turned out to be Mozambique´s first Grander Blue. Don’t know of any blue caught anywhere near that depth there!

Little Hooker´s 988-pound fish off Guinjata, caught last December, took a lure in 170-180 meters of water, from the pictures I have seen it is a Blue…. everything can and does happen out there!

Not always, but generally – a Blue´s first run is unlike any other, the speed is unbelievable, the reel sounding like a thousand Siamese cats being burned alive. That thing is a Ferrari on steroids and its first jumps completely different than a Black. Insane greyhound´s that just keep going, at a thousand miles per hour, sometimes barely touching the water. They also tend to jump all over the place, frequently going in circles as opposed to the more composed, predictable and straight jumps of a Black Marlin. On the other hand, Black´s just love to shoot straight up in the air when they feel the extra pressure on the wire!

There are always exceptions to the rules in this game and nothing is written in stone, so let´s leave the theory and chat about their actual morphology…

Normally for marlin identification, and especially on big fish, the body shape of these species is pretty distinguishable.

Blacks can carry the weight all the way back but they always appear to carry much more weight around the head and shoulders. They have a less oval profile than the Blue, which is shaped more like a cigar, and carry their weight uniformly throughout the body.

A Black´s color scheme has a bigger contrast between the upper and lower layer (black – blue to silver-white) and bigger fish tend to have less to no stripes. A Blue´s color tends to be bluer all round, with vivid blues and purple´s on top and into the dorsal. Their vertical stripes also stand out much more and the golden on their lateral line is more emphasized.

Marlin bills are very relative, but a Black´s bill is normally shorter, broader and heavier, especially in the bigger specimens. Their lower jaw is also a tad shorter and points down on big fish. A Black´s snout is more abrasive and sensitive to the touch…using a snooter on Black´s should be done with utmost care and only on tired fish. Blues, on the other hand, turn to puppies when you place that snooter.

One of the most common arguments anglers use to differentiate both species.

Unlike a Blue Marlin, where the pectoral fins fold into groves to help streamlined swimming, on a Black they are unable to retract. However, really small Blacks have the ability to do so and I have seen Blues by the boat, where one would try but could not retract their pectorals. This will also happen if the fish is dead. So be careful to make rushed decision…a much better way is to check them on a jump as a Blue tends to fold one or two fins when doing so.

I personally think that the shape of the pectorals is a great indicator as they are extremely different. This might come with experience but once you start seeing it there is a huge distinction as the Blacks are much more sickled shaped and curve back towards the rear. In comparison, Blues are wider and do not curve so much.

Even though these next fish are mostly small fish (which makes it more difficult to differentiate) these pictures of Blacks (first three) and Blues (last three) clearly show the differences between the two species.

One aspect for marlin identification that is immediately obvious is the different shape of the pectoral fins which is not commonly spoken difference but which for us is a clear indicator.

Ok, so, these three jumpers are black marlin…

And these hell-raisers are blues…

This is a great distinction as well seeing Blacks have the lowest dorsal than any other Marlin (40% less than their body depth), a characteristic that stands out even more, due to its predominant big shoulders. A Blue is considerably taller, up to 60% of its body depth. They are both pointed although a Black’s has the appearance of being more curved.

Not even sure if that is the way you spell it…but, that’s the boney elements in the umbrella-like membrane on a marlin’s “throat” below the gill plates. On the Black´s they are considerably longer and run further back towards the operculum and that is one of the reasons a Black´s Marlin head appears so much bigger than a Blue.

So yeah mate, think in a nutshell, that pretty much sums it up; the racehorse and the bull, the Ferrari and the bulldozer…the blonde and the brunette!!!“

Right on Duarte and thank you for the article! One question arises – what about striped marlin ha ha – next post then. Tx! – Sean

You can stay in touch with Duarte and team in real-time on Facebook at https://web.facebook.com/fishbazaruto/ .

One thought on “Beaten Black and Blue: Marlin identification by Captain Duarte Rato”